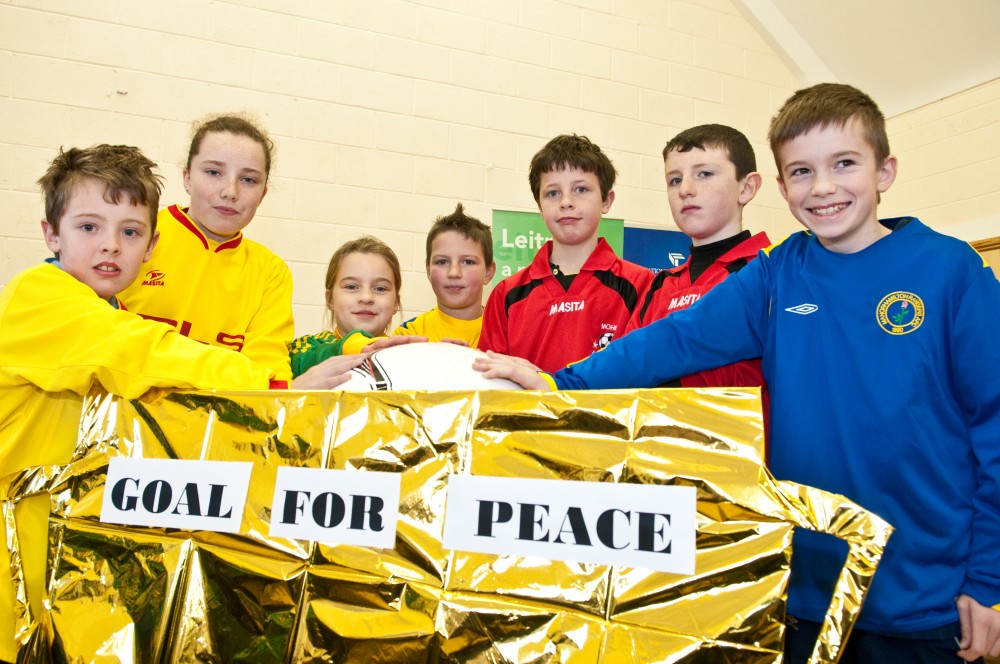 Sport has often been overlooked as a form of soft power that is able to broker moments of normality within periods of conflict between ethnic or national communities and as a form of public diplomacy or social intervention.

As a form of soft power that is able to broker moments of normality within terrorist situations or periods of conflict between ethnic or national communities, sport as a form of public diplomacy or social intervention has often been overlooked. This need not be the case. At the very least, sport may have a part to play in the reconstruction of people and places, reconciliation of relationships and the resolution of issues and animosities. At it’s worst sport can divide, but at its best it can provide moments of normality upon which other resources of hope can be activated and built upon.

At least four initial propositions might be put forward: (i) that sport matters in world politics because it can provide opportunities for diplomatic interventions at times when other forms of international relations and mediation are not working; (ii) that sport provides a popular prism through which nation- states can and do present an image to both the rest of the world and their own people; (iii) that sport can be a facilitator of change within a country and (iv) that historical ideals of sport being a cathartic form of war without weapons should be replaced by more progressive realist cases of sport being part of a holistic package or resources that any foreign ministry or office has at it’s disposal. Sport is a valuable soft diplomatic tool in certain situations. (Howie, 2012; Jarvie and Thornton, 2012)

The place of sport in peace building and conflict resolution is not new, nor is the expectation that it can contribute to any new International humanitarian aid agenda. International sport and development platforms such as ‘sport and dev’ illustrate the role of sport in reconstructing people, places and relationships that have been impacted upon by war, conflict and terrorism. An international peace and sport movement displays the power of sport to help with building sustainable peace.  That this is sponsored through the principality of Monaco is perhaps testament to the way in which territories continue to draw upon sport as a means of public diplomacy to talk across borders. On the 28 November 2012 the UN General Assembly passed a resolution on sport, reaffirming the use of sport to bring about positive social change. The Resolution, entitled “Sport as a means to promote education, health, development and peace”, encourages the use of sport as a vehicle to foster development and strengthen education, prevent disease, empower girls and women, promote the inclusion and well-being of persons with disabilities, and facilitate conflict prevention and peace-building. Yet the passing of resolutions, while indicating commitment and progress, does not in itself resolve any issue. However it is a start.

The reintegration of former child combatants and children affected by armed conflict into their former or new communities is considered to be one of the most difficult challenges in peace building. A recent UN study on the Impact of Armed Conflict on Children reports that government and armed groups around the world have recovered tens of thousands of children, most of them under 18 (many under age 10) in the past 30 years. The report states that children need the intellectual and emotional stimulation that is provided by structured group activities such as play, participating in sports, drawing and storytelling.

While the past decade might have witnessed progress in the fight against HIV, poor education and forms of inequality; the scourges of war, terror, unemployment and undemocratically elected leaders still remain as present as ever. The changing nature of conflict might have meant that most contemporary wars or conflicts have tended to be intra-national rather than international; however, the ability of groups to mobilise quickly across nations is undeniable. The powers of the social media networks are evident in the conflicts within both the Middle East and Europe.  The protests arising from the struggles for democracy in the Middle East as well as the struggles within the European nations as austerity measures aimed at controlling debt and rising unemployment have resulted in rising levels of social unrest and conflict. Tensions and struggles for power exist but the changing nature of conflict means that any consideration of the place of sport in conflict resolution today necessitates a realism about both the changing nature of world conflict and the role of sport in conflict resolution, diplomacy and peace building (Annan and Mousavizadeh, 2012).

Improving life chances, narrowing the gaps between rich and poor, assisting with social mobility, contributing to global communities and delivering as a resource of hope are all just causes and as such any contribution that sport can make should be grasped. However, this requires harnessing a strong political and action plan not paved with just good intentions but one that is built from within local communities and one that is realistic about what sport can and cannot deliver.

The role of art has long since been recognized as a valuable social tool in helping traumatized communities heal, but sport less so. In a number of ways sports have long offered a means of social intervention and welfare aimed at supporting people and communities traumatized by conflict; in supporting   conflict resolution, and by helping in situations of military conflict where sports are used to draw people out of routines of violence. As the international sports calendar unfolds for another year it is worth remembering that while there is no single agent, group or sports club that can carry the hopes of humanity, sport as a form of diplomacy that crosses borders or as a form of intervention and capacity building has a part to play.  There are many points of engagement through sport that offer good causes for optimism that things can get better, not just for individuals or communities, but for parts of the world that strive for a more just or humanitarian world.

If the Middle East, Mali and Algeria are recent faultlines, it is doubtful if the power of sport would have diverted the taking of hostages, or replaced conflict with a form of war without weapons in Kosovo, East Timor, Darfur, Iraq, Afghanistan, Sudan, or Libya. Yet sport was central to bringing about the end of apartheid rule in South Africa (Archer and Bouillon, 1982; Guelke , 1993) . Access to sport and physical activity is an acknowledged human right and as such between and the 25th October and 2003 and the 17th of October 2011 the United Nations General Assembly passed 23 resolutions advocating a greater role for sport within international development and peacekeeping efforts.

In January 2013 a UN special adviser on sport for development and peace visited a Syrian refugee camp in Za’atari and a number of sports clubs in Northern Jordan with a view to raising awareness about the severity of the Syrian refugee crisis in Jordan and the role of sport in rehabilitation and building resilience amongst refugee communities. In December 2012 the United Nations Development Programme sponsored the 10th Annual Football Match against poverty with the proceeds from the match going to two projects, one in Brazil and the other in Cape Verde. In October 2011 the UN Secretary General Ban Ki-Moon activated the Olympic Truce for the 2012 London Olympic Games. Since 1993, prior to each summer and winter Olympic Games, a resolution has traditionally been adopted, entitled “Building a peaceful and better world through sport and the Olympic ideal” and urged Member States to observe, the Olympic Truce throughout the duration of the Games. The resolution passed for the London 2012 Olympic Games was the first time that all 193-member states signed up to the Olympic Truce.

Peace beyond Borders has utilized sport as a tool to assist the brokerage of peace and conflict resolution in the borderlands around Kenya, South Sudan and Uganda. The boxing girls of Kabul is a documentary released by the Film Board of Canada that tells the story of 3 girls that take up professional boxing, are determined to fight their way onto the international stage and in doing so challenge Taliban beliefs about sport and women and boxing in particular. Didier Drogba used his position as an international footballer to talk about conflict involving the Ivory Coast- or what became known as Drogba Diplomacy. In 1998, during the Nagano Olympic Games, the observance of the Olympic Truce allowed the UN Secretary-General Kofi Annan to intervene to seek a diplomatic resolution to the crisis in Iraq. At the 2004 Athens Olympic Games, North and South Korea marched under the same flag of the Korean Peninsula. Football 4 peace is a sports based project for Jewish and Arab children in northern Galilee that uses football as a basis for conflict resolution training.

Development and sport as humanitarian aid ?

Sport has long since served states in the quest for identity, recognition, and the fostering of national pride. It has divided as well as integrated communities. Yet the United Nations exists for more than just member states but also the needs of individuals and communities. Sport and physical activity should serve not only states but also peoples and communities. The object of international development should not be aid but growth, increased freedoms, and the development of human and economic capabilities. The ultimate goal of aid should be to make itself redundant having helped local communities create tools and resources needed to be their own architects of change and development (Nutt, 2011).  Sport can help with reconstruction, resolution and reconciliation. Meaningful sports based projects work best when sport is part of a greater joined up picture or whole. Sport and physical activity can play vital roles as agents of progress.

Yet if sport were to be a greater force for progress it would need to engage much more in key challenges of peace and security; respect for human rights, good governance and the growth of human and economic capabilities and not just between communities but also nations.

Grant Jarvie is Chair of Sport and the University of Edinburgh having previously held established Chairs at the Universities of Stirling and Heriot-Watt Universities. He held the post of Vice- Principal from 2005-2012 and is a Visiting Professor with the University of Toronto. Most recently with James Thornton he has published Sport, Culture and Society. He can be contacted at Grant.Jarvie@ed.ac.uk

This article was originally published by e-International Relations, the world’s leading website for the students of political science.