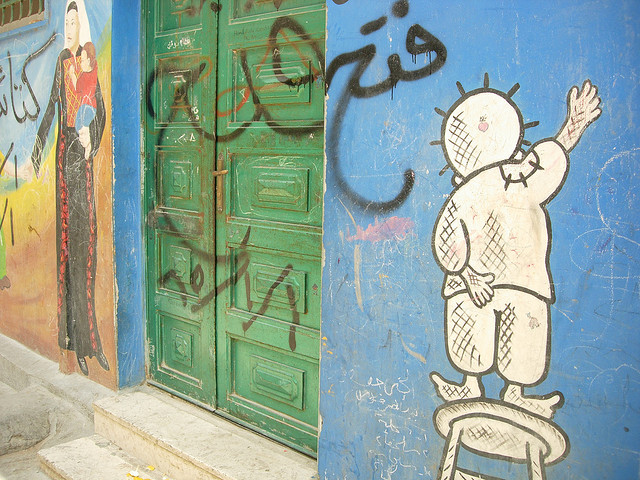 Art has the capacity to create another social reality, to give voice to the voiceless or to imagine a reality beyond conflict. Dreaming a new future is an effective weapon in struggle.

Modus Operandi, in collaboration with The Network University, is running a new on-line course, entitled Transforming Civil Conflicts. A group of twenty students from 12 different countries have come together in an on-line learning community to share their experience of working in conflict situations and learn about existing tools and concepts that better help us to analyse and act in order to transform the harmful aspects of conflict into constructive change processes.

One of the topics the course addresses is the difference between conflict parties’ positions, interests and needs, drawing on John Burton’s human needs theory. As tensions rise, the degree of direct dialogue between conflict parties generally decreases. More and more, actors take clear positions and express themselves through the use of statements and symbols. Throughout the course participants have provided illustrations of images that conflict actors use and have analysed their message and the needs behind it.

One participant, for example, commented on a picture of an drawing representing a character created by a Palestinian artist, Naji al Ali, who was forced into exile in 1948. He is commonly used as a symbol of the struggle as graffiti or on clothing; the needs which he represents are basic human rights and the right to return. His name is Handalah and he represents a ten year old boy who was made to leave his country. He never ages until he can return home. He is always portrayed barefooted to represent poverty and suffering, and with his back to us because as a child he refuses dialogue. The participant explained that this position has become increasingly popular amongst the population in the West Bank and Gaza as a result of the apparent collapse in dialogue between the Israeli state and Palestinians. As an innocent child, perhaps he can be used a counter to other more violent or religious imagery. 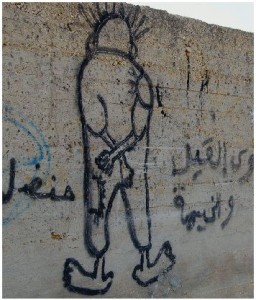 An interesting comparison is of the above symbol with one used in many different struggles (South Africa, Serbia, Occupy movement) – namely that of the clenched fist. More violent imagery is also present in the Palestinian struggle, for example, a stencilled symbol of Al Aqsa Mosque in Jerusalem is often used as graffiti and there are usually guns in the picture. This presumably is a direct result of the Intifada (1 or 2) and relates to the fact that Al Aqsa is a worldwide symbol of sacred Islam: i.e. the enemy has not just taken our land but also insults our religion”.

Art has the capacity to create another social reality, to give voice to the voiceless or to imagine a reality beyond conflict. Dreaming a new future is an effective weapon in struggle.

Humor as a means of protest

Cartoons and humour are widely used as a form of protest. An example are the cartoons of Gaddafi in Libya after the start of the revolution, which can be seen as an effective tool in liberating people from the fear that had developed over the years. A similar example of the power of humour can be found in the struggle to get rid of Miloseviç. Serbia’s Otpor, for example, broadcast a washing powder advertisement on TV. The story in the ad ran as follows: after a pretty housewife commented on all the advantages of a certain washing powder, she tried the product on a stained t-shirt. The stain being an image of Milosevic, she could get it off with the help of Otpor powder. One of the leaders of the movement, Srdja Popovic, explained that the regime felt powerless to these kind of attacks, which they could not ignore as a result of their popularity.

Based on this example it is interesting how humour can be used as a tool in conflict transformation: ridiculing a dictator is a powerful symbol. A violent response on the latter’s size can further discredit the regime. A more recent example is a joke about Mubarak, saying that to install democracy, you first had to remove him. (Example drawn from ‘Why dictators don’t like jokes’, Foreign Policy)