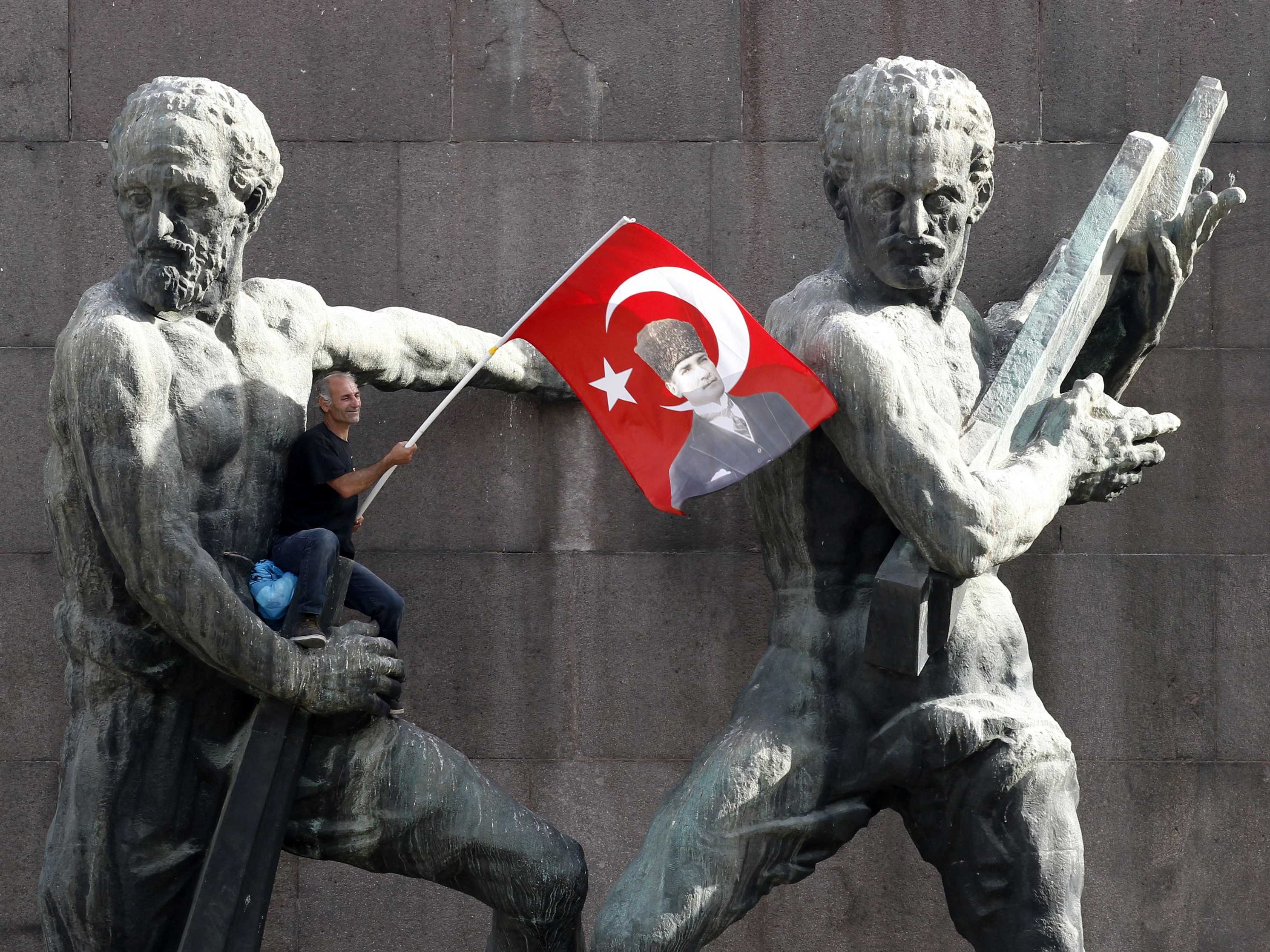 The messages conveyed by the popularity of the AKP and the vibrancy of the ongoing protests are unambiguous: the contradictions of Turkish society call, not for political and social polarization, but for the search of a modus vivendi, one that needs to be painstakingly invented and continually recalibrated, based on democracy, tolerance and compromise.

Taksim Meydanı has been a focal point of political protest in Turkey for the best part of the last one hundred years. It has also seen its fair share of violence and destruction: the Kanlı Pazar (Bloody Sunday) of February 1969, the Kanlı 1 Mayıs (First of May massacre) of 1977 are the most well known such examples. Traditionally the location of choice for the celebration of the 1st of May for the Left, it was off limits this year as the May Day events were not allowed to take place there. As a result, small scale skirmishes between Left-wing activists and the police took place in the surrounding streets a month ago but the area was soon back to normality.

So, earlier last month, no one would have imagined that Taksim would once more become the arena of the violent events of the past few days. The few protesters that started gathering and organized a sit-in at the site of Gezi Park in the run-up to 26 May to protest against the destruction of Gezi Park and the rebuilding on its site of the Ottoman Halil Paşa Artillery Barracks as a museum-cum-shopping centre had probably not imagined that they were going to become yet another addition to Taxim’s turbulent history of protest. Even more so, little did they imagine that their action was to become the springboard for a broader and viral protest movement throughout the country. Yet, in the early morning of 30 May the police attacked them displaying unprecedented brutality, using chemicals and water cannons – to the extent that one can safely deduce they acted with explicit and unambiguous government approval.

The initial protest was described by many as an effort to save the park that stands at the centre of the proposed development. Indeed, this is not an implausible explanation as Gezi park is probably the only notable green area in the vicinity, and one that should have been protected had not the developers expertly used regulations for the protection of historical and cultural heritage (read the museum to be housed in the rebuilt Halil Paşa Barracks) to overcome the statutory development restrictions in a green space. Indeed, many protestors are concerned at a host of major infrastructure projects that are going ahead without effective consultation such as a third airport, a new mosque that will dominate the Istanbul skyline, the opening of a ship canal in the Marmara area. Leaving aside the environmental concerns and the increasing public expressions of reservations of the pervasiveness of the market logic in the AKP leadership vision of a modern Turkey which I intend to discuss in a separate note, the governing party has managed to alienate several relatively young and upwardly mobile parts of its electorate who had invested, not in its Islamic credentials, but in its democratic promise against the tutelary democracy promised by its political adversaries. Indeed, eleven years after the AKP’s first landslide victory at the polls and its uninterrupted and virtually unchallenged hold to power, the political atmosphere was quite charged as the government had paid lip service to the accountability it had promised to uphold in the last elections and has introduced controversial measures such as the new regulations restricting alcohol sales near schools and mosques which, to many secularists, augured what many called ‘islamization by stealth’.

Within this atmosphere of suspicion and doubt, Gezi park almost instantaneously became the focal point of a massive and intricately networked popular movement. On the ground, people converged to the park to express a diffuse sense of unease and dissatisfaction, although, at least initially, no one could give it a clear shape or content. Despite the reluctance of television channels to relay news from Gezi park, news traveled fast to other cities and towns across Turkey, largely, though not exclusively, through the help of social media. Local protests were organized in various other urban centres and information and expressions of solidarity flowed through cyberspace between the various localities hosting their own protest events. As the police had not anticipated this transformation of an originally small and fairly localized protest into something so large and unprecedented in Turkish politics, it reacted with more violence. Local and national politicians were also unprepared for such an event and ill-equipped to make sense of it and articulate an appropriate reaction. Prime Minister Erdoǧan, described the protesters as ayyaş (alcoholics) and capulcu – slang for thug, punk or troublemaker. His reaction was arrogant and threatening as he warned them that he had his own supporters and he should not be provoked. His response was not untypical of his style of government which has attracted criticism for frequently shunning criticisms and reservations expressed by opponents . It reflected his puzzlement at how he, who had presided over a long period of economic prosperity and regional hegemony was at the receiving end of the ire of a nationwide protest movement that had just added in its demands his resignation. Erdoǧan, an otherwise astute politician who had changed the face of the country in his ten years in office by taming the country’s military that had seen fit on several occasions to brutally suspend party democracy on the grounds of the need to protect the country’s Kemalist heritage, by modernizing the country’s Civil Law and by bringing Turkey at the threshold of a historic peaceful settlement of the country’s Kurdish question, was unable to comprehend his sudden transformation into a villain. Other members of his party with less abrasive manners tried, once they became aware of the dimensions of the protest movement, to adopt more conciliatory positions: Abdullah Gül, President of the Republic conceded that freedom of expression and protest is part and parcel of democracy and assured the demonstrators that he had taken on board the message of the protest while Bülent Arınç, Deputy Prime Minister, offered to review the Taksim project in consultation with all parties and suggested that violence was not the appropriate response to the protests. The opposition parties and their leadership were also unable to make sense of what should have normally been a gift for any political force aspiring to end the AKP’s hegemony over Turkish politics. The so-called ‘secularist’ political forces have not had a notable role in the events of the recent days and the fact that their traditional supporters are almost certainly over-represented in the ongoing protest movement should not be interpreted as a sign of the return of the opposition from the wilderness. The current protest is not a party-led movement as the 2007 anti-AKP demonstrations which the opposition had organized in 2007 – its much more protean structure and discourses and its grassroots character indicate that the opposition parties may no longer provide a vehicle for alternative voices and the expression of political disagreement and dissent.

The protests constitute an alarm call for both government and opposition. They should bring home to the AKP the realization that Turkish democracy, all its deficiencies notwithstanding, has come of age. The streaks of majoritarian authoritarianism inherent in the AKP governmental record are increasingly becoming unpalatable to half of the electorate that had remained sceptical of the AKP’s pre-election assurances that it was not intending to pursue a strategy of creeping islamization. Arrogance and contempt can generate powerful emotions and solidarities and the past few days have made this abundantly clear. The opposition’s irrelevance during the protests is bearing bad news for its leadership. Although some of the slogans used during the protests such as the popular ‘we are the soldiers of Mustafa Kemal’, at first sight reflect the endurance of the Kemalist ideology shared by CHP, the major opposition party, with many other smaller political forces, the secular, democratic and grassroots outlook of the protests have very little to do with the fossilized, elitist and statist version of Kemalism revered by opposition parties. If one could use catchwords to describe Turkish society today, the words that come to mind are post-Kemalist and post-Islamist. To be more accurate albeit still simplistic, it is a society where secular modernity (including its political-democratic components traditional Kemalism has been so ill-at-ease with) intersects and interacts with conservative, often religious values, expressed by particular factions within the AKP, in so many possible ways. The messages conveyed by the popularity of the AKP and the vibrancy of the ongoing protests are unambiguous: the contradictions of Turkish society call, not for political and social polarization, but for the search of a modus vivendi, one that needs to be painstakingly invented and continually recalibrated, based on democracy, tolerance and compromise. This will require a government and an opposition that are prepared to ‘listen’. Whether the political class of the country is prepared to embrace the challenge of renewal is yet to be seen.