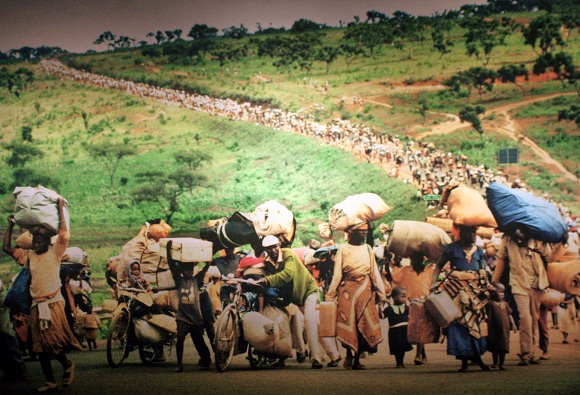 The victims of the Tutsi Genocide – one of the worst incidences of mass killing in the 20th century – are still struggling to receive financial compensation for their physical and material loss 20 years on, raising questions about whether it is even possible to fully compensate these people after such an atrocity?

The 1994 Tutsi genocide in Rwanda is a tragedy in human history which remains hard to understand. The astonishing severity and pace at which it unfolded begs many questions, paramount of which being: how does a country begin to recover after experiencing such an event? Yet 20 years on present day Rwanda serves as an ongoing development success story politically, economically and socially, due to the combined efforts of the Rwandan government and wider society.

The basis for this unexpected development can be traced to both internal and external institutional efforts that focused upon helping Rwanda as a country achieve reconciliation and development whilst also ensuring justice.

At national level, the Rwandan Government created the National Commission for Unity and Reconciliation in addition to special chambers designed to prosecute the most notorious war criminals. Equally, on a community level, traditional Gacaca courts were employed as a tool to provide reconciliation and justice. Upon its completion, it will have been the most thorough process in bringing the rank and file of genocide to justice. Over 100,000 inmates have been indicted for crimes of genocide. Similarly at an international level, the United Nations established the International Tribunal for Rwanda (ICTR).

Rwanda, as a society, has also undertaken many of the non-financial components of reparations in order to assist survivors. These include an annual public commemoration. Additionally, the Rwandan government has established Fonds d’Assistance aux rescapes du Genocide (FARG) and provide health care and tuition for survivors. But does this go far enough?

Though Rwanda and the international community have valiantly pursued justice, financial compensation for genocide survivors, either individually or as a collective, still hasn’t occurred to date. With this is mind, we must ask; can there be genuine reconciliation without financial reparation? The answer, in my opinion, is no. Reparation plays an important role on a number of levels – both in terms of mending the damage done and in educating society on the consequences of their actions.

This isn’t to suggest that the exercise of financial reparations isn’t challenging, both logistically and morally. To guarantee some degree of fair compensation it requires one to assess the damage caused to both person and property, and subsequently assigning a monetary value to these losses. Some would also argue, quite rightly, that genocide is an irreparable crime due to the sheer scale of psychological and physical suffering.

But irrespective of these logistical and moral challenges – and in light of universal recognition of the horrors of the Rwandan genocide- the silence surrounding the subject of financial reparations is striking.

In the immediate aftermath of the Tutsi genocide, Rwanda was a country in utter disrepair. Genocide had left tens of thousands of orphans and widows, as well as numerous refugees and displaced people, who were forced to flee to various parts of the region. The entire state apparatus was ravaged and the already scant infrastructure which existed previously had vanished.

Initially the issue of financial compensation was understandably placed upon the back burner as resources and attention centred upon formidable task of restoring Rwandan infrastructure. But 20 years on – despite the existence of a strong governing body – dialogue surrounding the issue of financial reparations remains absent from the political arena.

The resistance of the political elite to enforce compensation for victims

In theory, the Rwandan legal framework explicitly provides a framework for genocide survivors to seek and receive compensation. Under this framework prosecutions against genocide suspects have been conducted. According to the Lawyers without Borders, out of the 159 judgements made by the specialised chambers specifically created to prosecute genocide suspects, 50% of them have awarded financial compensation to victims. However, these judgements, though enforced on a criminal level, have yet to be enforced with regards to financial compensation.

In countries around the world – or more accurately those with legitimate and effective legal systems – a judgement made by its courts is considered legally binding. It guarantees inalienable rights to beneficiaries. Survivors of the Rwandan genocide, therefore, have the right to demand the application of these judgements. But this is not the case in practice. This inaction on behalf of the government highlights their lack of clarity, on the issue of financial reparations. And this is far from an isolated case.

Indeed, in some cases the Rwandan government itself has been mandated to pay indemnities to the victims. But instead of implementing the judgement the Minister of Justice at the time wrote a letter to all justice chambers dealing with genocide, ordering them to “suspend all cases in which the Rwandan government is called upon to intervene .” This is clearly in opposition to the process of reparation and the administration of justice. Similarly, in 2001, a bill calling for the creation of a compensation fund was formulated. This, however, never materialised.

If we are to look critically at this general attitude of the Rwandan government, we could interpret this in one of two ways; as simply a demonstration of complete indifference towards the issue of reparations, or, perhaps more sinisterly, a calculated political move.

It has been speculated that at the forefront of government concerns are how financially compensating the survivors of the Tutsi community may affect social cohesion. It could be speculated that to openly provide government financial support to the Tutsi community – a group historically considered to have enjoyed unique privileges in Rwandan society under colonial rule – could risk fostering resentment amongst the Hutu majority community.

Reparations could be detrimental to the already fragile social cohesion in a country where there is still a Hutu majority and in whose name the genocide was committed.

The international community failing the victims – prior and post genocide

It is generally agreed that the UN failed the victims of the genocide. Instead of protecting civilians, the UN military contingent fled the country during the peak of the killings. Many assessments of the genocide have also concluded that, among other factors, the enormous death toll was aided by the fact that people held confidence in the UN peacekeeping troops and remained in Rwanda. Because of this, the reputation of the UN amongst the Rwandan people has suffered. And one would hope that after their failures the UN would take a leading role in compensating survivors. But unfortunately the UN has, so far, only shown an interest in the criminal proceedings and has completely ignored financial reparations.

The UN Security Council established the International Criminal Tribunal for Rwanda (ICTR) in the aftermath of the genocide on November 8, 1994. But, parallel to this commitment for criminal justice, the ICTR has avoided dealing with matters of financial reparation for victims (none of judgments issued by the ICTR to date have awarded financial damages). How can an institution like the UN not understand the importance of financial reparation in the rehabilitation of victims and administration of justice?

One could conclude that there is a lack of a will from UN authorities to participate in reparation process. Indeed, initiatives have been taken to encourage the UN to amend the statute of the ICTR to include the creation of a compensation fund, but without success.

Notable is former ICTR prosecutor Carla Del Ponte’s statement on the matter: “Every judge agrees with the principle that victims should be compensated…(therefore) we thought we should approach the Security Council of the United Nations to amend the statute, to extend our office mandate so that we can compensate victims.” This, unsurprisingly, has fallen on death ears. It begs the question, how can the ICTR be considered an effective institution of justice if it fails to offer financial reparations to the victims of genocide?

The UN commission created to compensate Kuwaitis following their 1990 invasion by Iraq – as well as the $1.07b subsequently made available to the Government of Kuwait – shows that there doesn’t exist at the UN an institutional opposition to participating in the reparation process. So how can we explain their unwillingness to do so in Rwanda?

Perhaps some of the blame for this lay at the feet of the Rwandan government. Their markedly weak stance regarding financial reparations to the Tutsi people is a perhaps an explanation for the international community’s hesitance to intervene on the behalf of survivors. The solution to this is concrete measures at a national level to encourage other international partners to participate- a compensation endowment, as was originally intended by the draft law in 2001, for example.

Having said that we should recognize the contribution of FARG to improving the living conditions of survivors – every year 6% of the total state income revenue is spent on it. But assisting survivors, as a vulnerable group, is an obligation for any responsible nation. It does not remove the right for financial reparations.

Jean-Paul Mugiraneza is Program Advisor for Interpeace Regional office as liaison officer in Kigali and Insight on Conflcit’s local correspondent for Rwanda.