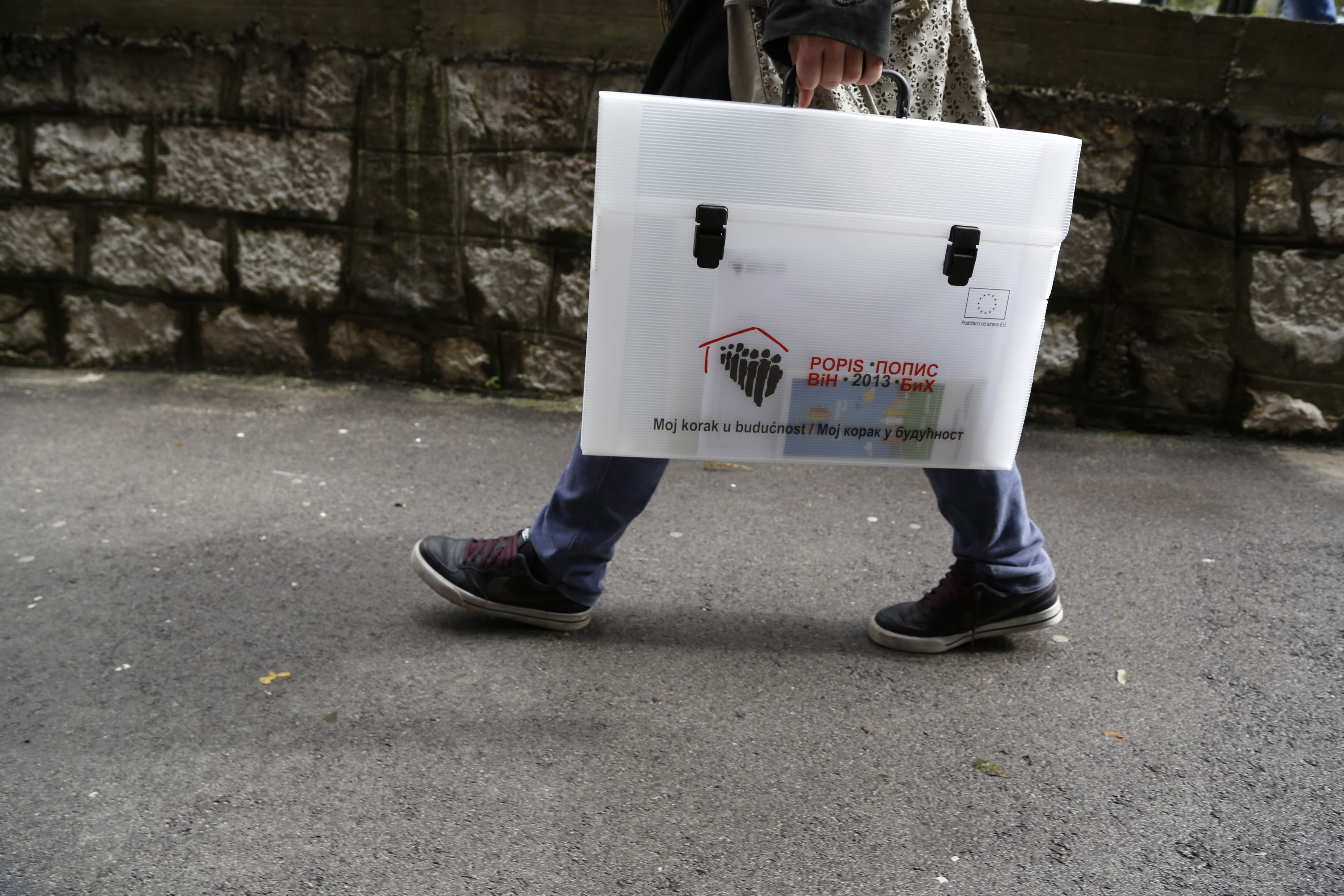 The waiting period for the census results unfortunately coincides with next year’s general elections meaning that leaked census results – real or made up – might become a feature of the election campaign. So though the counting is over, the use and abuse of numbers has just begun.

On 15th October, the Bosnian census official came to end: media from around the world (here, here and here) took this opportunity to devote some space to Bosnia that evokes little international attention as the permanent crisis of the country is no longer newsworthy.

So why the census? Formally, the results will have few immediate consequences. The quotas in the public administration for members of different “constituent people” are linked to the so called completion of Annex 7, i.e. the chapter to refugee return. These formal criteria are of course a farce. There is no significant refugee return in Bosnia for nearly a decade and while there continues to be a slow trickle, for all practical purposes this chapter is closed. Otherwise the distribution of offices is enshrined in Dayton that does not provide for any formal link between demographic distribution and power it endows group-representation. Of course, the census gives everybody something to hope for and fear of.

This is probably the reason this census actually succeed despite high levels of political tension and minor  irregularities . The census in Macedonia, a similarly sensitive context, had to be abandoned after a few days of counting. Neither has any particular group boycotted the census, as was the case among Albanians in South Serbia and most Serbs in Kosovo in 2011 (for an overview over the contestation in censuses see the recent article  by Gezim Visoka and Elvin Gjevori and by Dejan Jović in Političke analize).

1. The number of Bosnians

The number of Bosnians is probably the largest uncertainty. Unconfirmed numbers for the sample census suggested a high share of Bosnians (above 30%). This number seems unrealistic, at least on the Bosnian-wide level considering low levels of identification with supra-ethnonational identities in pre-war censuses and the degree of polarization after the war. Of course, a high number of Bosnians constitutes a threat to the currently dominating parties that derive their legitimacy and power from importance of the “constituent people” as the main Bosnian identifies categories. The more Bosnians, the less sustainable is the Dayton arrangement. However, two important questions emerge: First, who are the Bosnians? If most Bosnians are by background Muslim-Bosniaks, the ethnonationalist model is not equally threatened, but just among Bosniaks parties. Only if a significant number of Bosnians are also of Croat and Serb origin, can the number challenge the current arrangement. The second question is how to accommodate Bosnians in the current system. Of course, this will depend on the numbers, but this has been difficult in Yugoslav times, when in fact the authorities from the 1970s onward discouraged identification as Yugoslavs to the 1990 Bosnian election where one seat of the 7 member presidency was reserved for Yugoslavs and Others, resulting in the victory of the Muslim candidate Ejup Ganić for the post who was not particularly Yugoslav or Other. Treating Bosnians just like another ethnic group and thus replicating the system of representation for constituent people might be tempting, but is absurd. Instead, a large number of Bosnians would suggest that the levels of ethnic representation built into the system should be overall reduced.

2. The number of Croats

Croats were the smallest of the three constituent peoples already in 1991 and having obtained Croatian passports (as have many non-Croats as well), many left for Croatia over the past 18 years. Thus, a considerably smaller number of Croats is expected than in 1991. If the share of Croats would fall under 10 per cent, the demand for equal treatment to Bosniaks and Serbs would be less plausible and the bargaining power of Croat parties would diminish. Of course, a small population share is also in other divided societies not an obstacle for representation and the Turkish Cypriot community held considerable influence after independence and also in peace plans since (including the 2004 Annan plan), despite constituting less than 20%. Similarly in Kosovo, the Serb community constitutes around 6% of the population and enjoys reserved seats and extensive mechanisms to ensure its input in the decision-making process. Yet, a sharp drop among Croats would confirm that Bosnia is moving towards a bi-national state.

3. The number of Bosniaks

Bosniaks are the community with the least firm identity matrix and thus some of the most pronounced „campaigning“ during the census was among Bosniak citizens. No census has so far offered the possibility to declare as a Bosniak, so we do not know yet whether citizens agree to the switch from Muslim to Bosniak identiy made during the war by intellectuals and later ratified in Dayton. In neighbouring Croatia, Serbia and Montenegro a significant share of citizens opted for the older category of Muslims over Bosniaks. While the term Bosniak might have more traction in Bosnia itself—the problem for Muslims in Serbia, Montenegro or Croatia is that Bosnia is not a kin state and the affiliation with Bosnia is less obvious—the might be a substantial number of Muslims. In addition, probably most Bosnians would be otherwise identifying as Bosniaks. In theory a large number of Muslims or Bosnians could result in a situation that Bosniaks are not the largest community in Bosnia.

4. The number of non-Serbs in RS

Before Republika Srpska was established in 1991, only around 54% of the population were Serbs, the number climbed to well above 90% by the end of the war through ethnic cleansing, mass murder and genocide. However, as refugees did return, it is unclear what the numbers are today. While the RS hopes to “ratify“ ethnic cleansing through the census and to confirm that the RS is a proto-nation state a larger share of non-Serbs would challenge this ambition.

5. The congruence of nation, language and religion

The dominant understanding of ethnonational identity is that national, religion and language identity are linked. It is thus no surprise that these questions are grouped together in Bosnia, as in most other census of the region. Of course, this presumption is by no means certain. While it is unlikely to find more than a few Croats who also identify as Muslim, there is potential for non-Bosniaks and Bosnians to speak Bosnian and being an atheist is not inherently incompatible with being a Bosniak, Croat or Serb. If we look at census in recent years across the region, there is few heterodox combinations to be found, except for Montenegro, where language and national identity do not coincide.

6. How many Bosnians are there in Bosnia?

Nobody knows how many people live in Bosnia. The numbers given suggest around 3.8 million, but these are at best estimates. As a result, one does not really know that GDP per capita and other crucial data cannot be determined without the population size. In addition, the specific numbers across the country might correct some misconceptions. Generally speaking, one would except a trend in urbanisation as a result of the war and the post-war period as poor rural areas have been abandoned. Yet the cities might have not grown as much as some expect. This was one of the big surprises of the Kosovo census when it emerged that Prishtina was not as large as observers had thought. Similarly, the general depopulation of certain regions, in particular eastern Bosnia is an important question as these areas with a large Bosniak population have suffered from depopulation through the war and poor economic conditions have made the return particularly unattractive.

While some preliminary results will be published early next year, it would be unusual based on other censuses in the region that these preliminary results would contain any data on identity. This data will take considerably longer to process, and according to the International Monitoring Operation (IMO) which includes representatives from Eurostat, the European Commission Directorate-General for Enlargement, the Council of Europe (CoE), United Nations Statistics Division (UNSD), the United Nations Economic Commission for Europe (UNECE) and the United Nations Population Fund (UNFPA), the final results will be released between one and one and a half years from now. This waiting period unfortunately coincides with the next general elections meaning that leaked census results – real or made up – might become a feature of next year’s electoral campaign. So the counting is over, the use and abuse of numbers has just begun.

Florian Bieber is a political scientist working on inter-ethnic relations, ethnic conflict and nationalism, focusing on Southeastern Europe. He is a Professor in South East European Studies and director of the Center for South East European Studies at the University of Graz. Florian  is also a Visiting Professor at the Nationalism Studies Program at Central European University. He is the editor-in-chief of Nationalities Papers and the associate editor of Southeastern Europe , and is on the  editorial board of Global Society, Ethnopolitics, Südosteuropa.