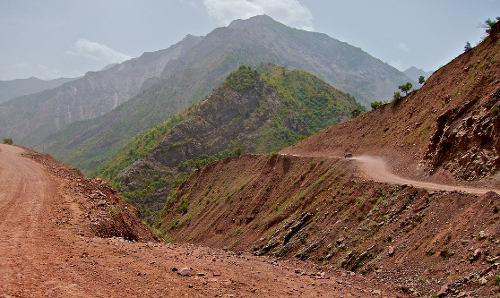 The revival of the country’s ancient role as a trade and transport hub for South and Central Asia can contribute to a stable and prosperous Afghanistan.

“We believe a stable and prosperous Afghanistan can only be envisioned in a stable and prosperous region,” stated Afghan President Hamid Karzai. Speaking at the second Bonn Conference on Afghanistan in December 2011, this statement correctly asserts that stability in Afghanistan and stability in the region, are two mutually-reinforcing pillars. Thus the future of the region is dependent upon Afghanistan’s ability to meet its state-building measures and move beyond what has been called the decade of ‘transition,’ to the decade of ‘transformation’ (between the years 2014 and 2024).

The prospects for a stable and prosperous Afghanistan, following the withdrawal of NATO-Isaf forces in the post-2014 period, will largely depend upon Afghanistan’s ability to sustain economic growth, provide goods and services to its people, reduce its dependence upon international aid, and realise its natural resource deposits.

Thus an Afghanistan connected to the South and Central Asian region through the revitalisation of the ancient Silk Road, will not only help re-establish Afghanistan as a land-bridge, but also help sustain its economy by  facilitating and connecting the transit of goods and energy across the region.

Revival of an old idea

However, Afghanistan as a connector and bridge in the South and Central Asian region is not a new idea; its roots are grounded in an ancient highway that connected the eastern with the western world, known as the Ancient Silk Road.

Due to its geographical position Afghanistan was centrally located on the Silk Road, along which goods were transported from Beijing to Bactria (known today as the Balkh province in Afghanistan), and then headed out towards Turkey and the commercial ports of Europe. Balkh was considered the “cross center and convergence of all branches and courses” of the 11000km ancient highway. The Silk Road was therefore not only a trade and transit route for tradesmen, it was also a symbol of “collective security and global peace in the ancient centuries,” for it connected three empires – the Han in China, Kushanid Empire in Afghanistan and Roman Empire in the Western hemisphere.

Although the revival of the Silk Road has been discussed for decades by those travelling it, as well as by others such as the United Nations and the USA, it only came to official formation in the sidelines of the UN General Assembly in September 2011, at which the US Secretary of State Hillary Clinton introduced the ‘New Silk Route’ initiative with her counterpart, the Afghan Foreign Minister Zalmai Rassoul. This New Silk Road would once again create trade routes between Asia and the West, facilitated by the establishment of modern highways, rail links and energy pipelines.

Certainly, such an initiative is part of the wider transition program envisioned by the US, which has already shifted its focus from stabilisation projects to investment in Afghanistan. It is also arguably a process intended on assisting the withdrawal of the US from Afghanistan, by creating a viable environment ultimately giving way to “spurring growth, and integrating Afghanistan into the economy of South and Central Asia.”

Increasing importance in trade and transit

Certainly, despite an enduring conflict, weak rule of law, corruption, a doubtful security transition process, an ambiguous peace process, and 11 years of nation-building, Afghanistan has begun to regain its primary position as a trade and transit hub.

To this effect, it has already commenced infrastructural rehabilitation in all sectors, including   railways, highways, energy sources, natural resource discoveries, and trade and transit. Illustrative of these achievements are the Afghanistan linkages in regional forums, such as the Regional Economic Cooperation Conference on Afghanistan (RECCA), the Economic Cooperation Organization (ECO), the South Asian Association of Regional Countries (SAARC), the Shanghai Cooperation Organizations (SCO), and others.

Afghanistan has also worked to consolidate its infrastructural build-up, serving to reflect its  economic growth, its potential to connect Central Asia with Southern Asia and vice versa, and its capacity to provide mineral wealth and become an energy source to the region; whilst on the international market, it serves to demonstrate its vital importance to ensuring stability in the region.

Regional assistance will be crucial

Nonetheless, today’s reality is that the region continues to be primarily held hostage by political and strategic dissonance rather than full integration, conditions which do not lend themselves to success on the new Silk Road initiative.

Thus in the post-2014 period, Afghanistan will increasingly require more regional assistance, for regional cooperation rather than international involvement, with regards to military and wasted development assistance, will prove to be the ultimate beacon of progress for Afghanistan. Such an approach must be assessed, analysed and further developed upon through various regional forums, if it is to achieve greater connectivity in the region.