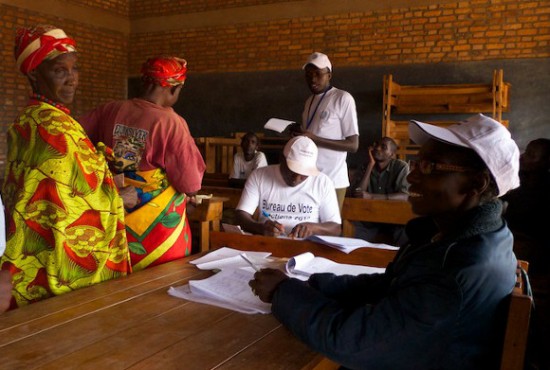 As Burundi prepares for elections in 2015, political tensions are rising. Local peacebuilding organisations – determined to make sure the elections are not marred by violence – are building an early warning network to monitor and respond to the volatile situation.

Since September 2013, Burundian civil society organisations have been reflecting on the best ways of engaging in a proactive and strategic national monitoring of the electoral process for an early warning and early response to electoral incidents.

Supported by Peace Direct and Friends Committee on National Legislation, 17 organisations actively involved in peacebuilding and defense of human rights gathered mid-September for a 3- day workshop. This meeting intended to promote exchanges and dialogue between local peacebuilders for an early warning and early response strategy; discussion of the main peace challenges in Burundi; and to conduct an analysis of opportunities, challenges and strategies for the implementation of this network. Peacebuilders from Kenya, Liberia and Nigeria came to share their experiences with their Burundian colleagues.

During this workshop, strong peace potentials were identified, such as the common language and culture, successful experience in conflict resolution, community rehabilitation, grassroots reconciliation, progressive trauma healing, successful reintegration of army, vibrant civil society, and relative freedom of the media. The various actions already underway towards the promotion of political tolerance and prevention of electoral violence were also seen as key strength.

This citizen initiative comes in the context of a volatile environment marked by verbal and physical confrontations between political rivals. During the second half of 2013, there was a rise in political tension,with increase political intolerance in the media and on ground. The different youth wings affiliated to political parties have been revitalized and some of them have spread provocative messages and committed violent acts that are likely to exacerbate tension within communities. Flags were torn, blood and dung spread on some offices of political parties. All these developments demonstrate a highly risky and volatile atmosphere ahead of Burundi’s 2015 elections. If this context remains unchanged and nothing is done to prevent radicalisation and escalation, the worst is feared.

Past experience with an early warning system

Citizen mobilisation for peaceful elections is not a new experience in Burundi. In 2010, 10 local and international organisations initiated a project called ‘Amatora Mu Mahoro’ for regular monitoring of democratic principles and the prevention of electoral violence. An online platform similar to the Ushahidi model was used with information reported by over 400 citizen reporters across the country.

This experience revealed the great potential of organisations on the ground, and dedicated citizen reporters and analysts, for an objective monitoring of relations between political and non-political actors.

Between April and December 2010, the Amatora Mu Mahoro project identified 519 cases of violence (intimidation, confrontations between youth wings of political parties, destruction of property, as well as cases of assassination) and 987 peace initiatives (these include civic education and electoral, peace messages broadcasted through the media, peaceful conflict resolution and peaceful cohesion).

This experience inspired Kenyan civil society, which that has used and improved this system to organize a careful monitoring of the 2013 elections.

Towards the establishment of a strengthened national network

Based on this experience and lessons learned, civil society organisations in Burundi are determined to do better for 2015. ”If we start early, with adequate technical and logistical resources and a team of citizen reporters throughout the territory, we will be able to quickly and objectively collect facts and incidents for a quick response,” said Florence Ntakarutimana of Healing and Rebuilding Our Communities, after a second workshop that gathered 28 organisations member of the network early November.

Emile Sindaharaye from Help Channel Burundi welcomes the presence of experienced organisations within the network. ”We are fortunate to have with us various representatives of all population groups, especially those who have been involved in election and human right monitoring for a long time. This contributes to the stability, credibility and professionalism of the network.”

During December 2013, the coordination committee worked to define the vision of the network and identify an appropriate mode of organisation and operation, before starting concretely with the first activities of the agreed action plan early this year.

Questioned on the challenges this initiative could face, a committee member said: “The success of this work will depend largely on the cooperation of other stakeholders, particularly local authorities, police and judiciary courts. If these three categories work closely with us, electoral violence could be an old souvenir.”

Landry Ninteretse is an active member of Action for Peace and Development (APD), an organisation set up to increase the participation of young people in the social and political life of Burundi. He has a particular interest in environmental issues. Landry speaks English and French.

If you would like to write for TransConflict on any conflict or conflict transformation-related issues, please contact us with your ideas and suggestions by clicking here.