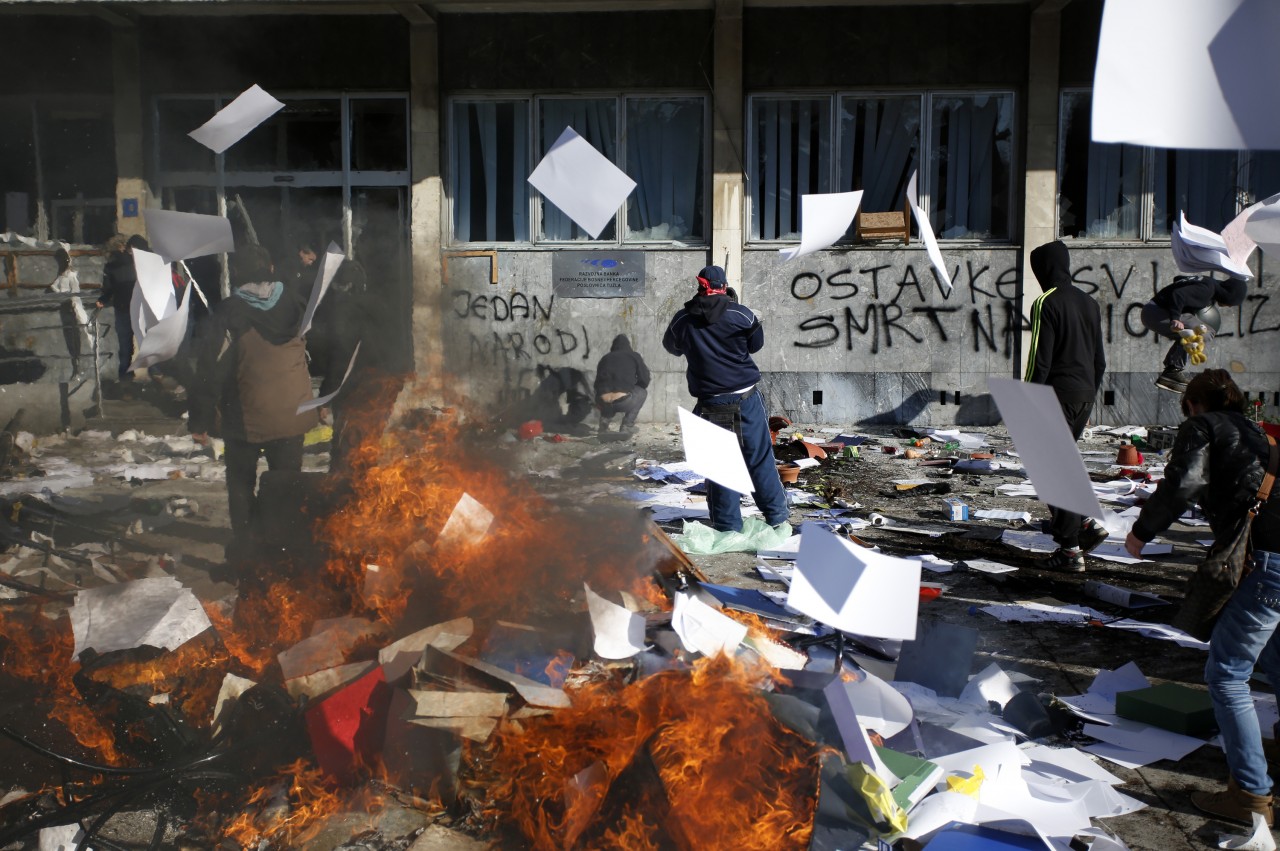 The European Union and Jasmin Mujanović share a key misconception: that out there, somewhere, there are huge numbers of progressive Bosnian voters ready to spring forth and transform the country.

Dražen Pehar makes an eloquent case that the Bosnia situation is too horrible to be resolved. Where to start? Thus:

…this crisis is not only a crisis of the state structures or institutions, but also one of morality, legality, education, public media efficiency, and a sign of both economic malaise and social alienation and atomization in general

…the entire structure of the Dayton system, precisely because of the arrogant and ignorant practices of its local and international representatives, has all but collapsed in a single night. Attempts to shore up this system will be made, of course, but the psychological transformation we have witnessed in the people of BiH is now irreversible…

…there seems to be widespread support for the abolition or, at least, the reorganisation of the cantons: in short, a rationalisation of the state apparatus. The protestors realise that the country’s dire economic situation is not merely the result of corrupt officials, but rather of the constitutional order itself

And spinning away beyond the ideological solar system of sanity Slavoj Žižek hails the Bosnian protesters for exhibiting bratstvo i jedinstvo:

…we are dealing with a rebellion against nationalist elites: the people of Bosnia have finally understood who their true enemy is: not other ethnic groups, but their own leaders who pretend to protect them from others. It is as if the old and much-abused Titoist motto of the “brotherhood and unity” of Yugoslav nations acquired new actuality.

Who knows? Maybe they are all correct.

The sheer incoherence of the protesters’ demands is impressive. Those of us who believe in a smaller state and the role of markets cheer the calls for a new technocratic government and an end to corruption and ‘irrational payments’ in the Federation’s bloated bureaucracy. Those on the hard and/or dotty Left love the idea that privatizations should be reversed and ‘production’ restarted under public control.

The drama facing Bosnia (and Herzegovina?) now is all about the compounding effects of introspective incompetence going back decades. This, as Dražen Pehar says, makes it next to impossible to change anything easily, if at all.

That said, we have to start somewhere. I start with the Bosniac political and intellectual elite. They head the largest ethno-cultural community in the country, so they have a special responsibility for creating success. Dayton was a bad agreement reached for good reasons, but it did have one notable advantage: it created such decentralized structures that each community had the chance to forge ahead if it got the policy mix right.

The Bosniac elite that emerged from the collapse of Titoism comprised a messy combination of principles and beliefs. When I was in Sarajevo from 1996-98, Alija Izetbegović represented a sort of pragmatic etatist-Euro-Islamism. Haris Silajdžić represented a more militant Bosniac-nationalist position. And Zlatko Lagumdžija represented a vapid, more secular European-style social democracy. Other influential figures lurked in the background exploiting the situation (and accumulated war profits) to get vastly rich.

The point is that after the Bosnia war ended there were no senior Bosniac voices making the case strongly for smaller government, strong market-based reforms and radical de-communistization. No-one wanted to throw open the former UDBA archives and have a massive spring-clean of public life, as happened elsewhere in post-communist Europe. Everyone wanted to grab the UDBA power structures for themselves and use them against their rivals! More generally, there was evident Yugo-nostalgia or at least socialist self-management-nostalgia in the wider public. It had all been so cosy before the wear – could not those happy days be re-created?

Nor did the international community really bring in that vital reform factor. The OHR and World Bank/IMF and eventually the EU said all the right things, but in practice they ended up cutting deals with existing power-structures bent on keeping tight control of money and patronage. It took months to get the greedy ethnic telephone authorities to cooperate. The US Embassy battled to get agreement that a McDonald’s hamburger joint open in Sarajevo, such was the power of the city and other bureaucracies who wanted to keep out competition. Little was done by the OHR to mobilize private business leaders and entrepreneurs as a lobby for change.

In short, there was no real attempt by anyone – but above all by the Bosniac elite themselves – to look hard and long at Bosnia’s dismal economic prospects and identify a strategic plan to generate wealth. Look at the colossal investment Western taxpayers have made in this small European country for nearly 20 years. Bosnia and Herzegovina still languishes just below Mongolia and Burkina Faso in the global league table of economic freedom, but just above them in the corruption perception index. This is a startlingly poor result.

Jasmin Mujanović is right, up to a point:

At no point have the international architects of peace in BiH expended any serious energy to include ordinary citizens, students, workers or pensioners in the reforms which European and American diplomats insist the country requires. Instead, by engaging exclusively with members of BiH’s obstructionist and recalcitrant political establishment, they have only cemented the oligarchs in their posts while the pleas and demands of ordinary citizens, students, workers and civil rights activists have been ignored.

But he ignores the fact that ‘European and American diplomats’ have at least given Bosnia’s workers, activists and students the chance freely to vote time after time, and they have regularly re-elected the incompetent elites who are now presiding over this omnishambles.

This raises an important question. What if some countries have ended-up without the top-end intellectual and political resources to run themselves, and are now stuck in a political blind alley? Is it better to take them into some sort of external political administration and give them tough-love rule, to slash away the worst practices and create new, smarter communities of interest? Neo-colonialism-Lite, but with defined rules and a clear, agreed end-point.

What indeed if the European Union stepped in to force through changes that met the Bosnia protesters’ demands for a ‘technocratic government’ of expert, non-political, uncompromised people who then ran Bosnia according to modern social market principles for a fixed five-year term, ending in elections to bring Bosnians themselves back into power?

I hereby volunteer to be Supreme Administrator of the Federation for (say) a couple of years. My programme would be simple.

I’d throw open the secret police archives and launch an independent international enquiry into Bosnian war profiteering, with full amnesties available to anyone who comes clean and promises to help the country make a clean start.

I’d aim to drive the Federation as fast as possible towards the top of the world’s league tables for low taxes, transparency and anti-corruption. I’d proclaim loudly that it makes no sense protesters demanding ‘jobs’; jobs come only from people selling goods and services that others want to buy. I’d launch an urgent libertarian-inspired audit of every law and regulation and planning permission or trading licence that holds back the economy, and then have a huge bonfire of communist and post-communist legal rubbish.

I’d invite in Korean tech guys to make the whole territory a state-of-the-art wireless zone. The aim would be to make the Federation a fashionable magnet for geeks, innovators and IT-entrepreneurs from around the planet.

I’d also suspend Bosnia’s EU accession processes, to give the economy and society a chance to breathe freely first: it makes no sense to pile on EU standards and processes that are currently unaffordable.

Within only a couple of years the Federation could be growing fast, as Bosnians’ own energies and creativity were at last set free. Bosnian Serbs would be clamouring to join the success. The political tensions would start to evaporate. The Dayton constitution could be renegotiated in an optimistic mood of success and shared growth, not decline and suspicion.

All this won’t happen. Instead the same old people will carry on with the same old hopeless socialist policies and instincts, with destructive Islamism becoming a default option for disgruntled Bosniacs.

Maybe the Bosniac leadership will be shocked into making some sensible reforms. But will this be enough to make a real difference? Frankly, I doubt it. These people have nowhere else to go if they do not have their comfy offices. And in any case they have intricate networks of veze and patronage, so that even if they do leave office they’ll be replaced with their relatives, friends and supporters.

The European Union and Jasmin Mujanović share a key misconception: that out there, somewhere, there are huge numbers of progressive Bosnian voters (citizens! workers! students! activists!) ready to spring forth and transform the country.

This is a serious delusion. In a Bosniac community of only some two million people, almost literally everyone with any education is linked by family, veze or other close ties to someone high in the current system. This means that everyone, protesters and all, is implicated in this country’s complex failure. Who realistically can have the independence of mind and sheer courage needed to take on the responsibility for defining and leading a new future?

Charles Crawford served at the British Embassy in Belgrade from 1981-84 and later as HM Ambassador to Bosnia and Herzegovina and the Federal Republic of Yugoslavia (Serbia and Montenegro). He writes at www.charlescrawford.biz and Tweets @CharlesCrawford