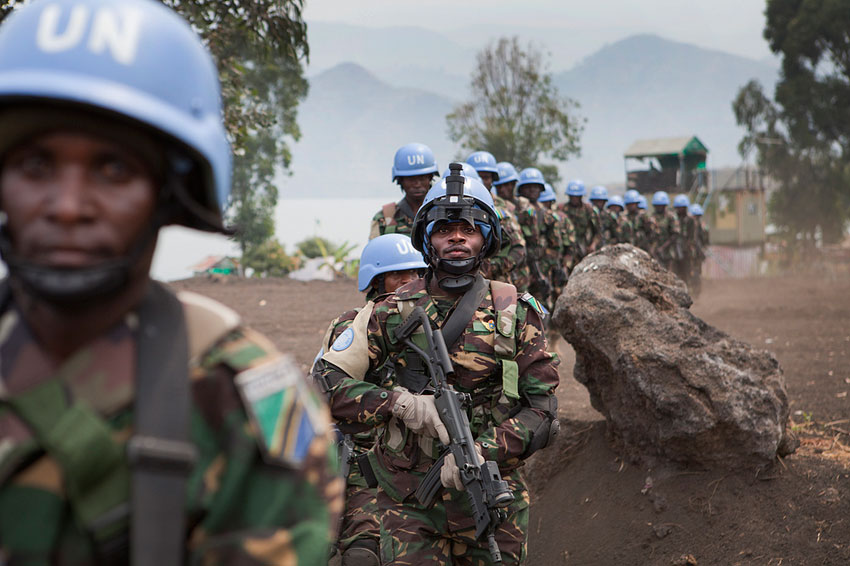 The deployment of a UN Force Intervention Brigade (FIB), authorized to undertake “all necessary measures” to neutralize armed groups, represents an important step in the evolution of UN peacekeeping missions.

The creation of a Force Intervention Brigade as a component of MONUSCO, the UN’s peacekeeping operation in the Democratic Republic of the Congo (DRC), represents a possible end to the main dilemma facing UN peacekeeping missions – namely, whether or not they can use force.

Approved on March 2013 by the Security Council, the UN Force Intervention Brigade (FIB) authorizes blue helmets to use “all necessary measures” to avoid violent attacks from rebel forces. Those measures include a preventive, offensive attack by the UN to neutralise armed groups. This case therefore constitutes an important step in the evolution of UN peacekeeping; one that will be a test case for ensuring that blue helmets don’t become victims of armed conflict.

This resolution provides two important reflections upon two aspects of UN peacekeeping deployment policy; first, concerning the late deployment of peacekeeping missions to fragile states; second, the need to change peacekeeping operations based upon the challenges and complexities of armed conflict.

Though armed conflict erupted in 1991, the first peace operation – in an observer capacity – was deployed only seven years later. Reports published by the UN indicated that UN offices and staff were attack by rebel forces, the Revolutionary United Front (RUF), who kidnapped some 300 blue helmets in 2000. Though an end was brought to the armed conflict with support from British troops, analysis of the Sierra Leone case shows that the later a peacekeeping mission is authorized by the Security Council, the  more vulnerable it will be against the complexities of armed conflict. .

An Agenda for Peace was the first document in which peacekeeping missions deployed by the UN were defined, including their objectives – such as the identification of possible armed conflicts, involvement in peace processes, support to the implementation of agreements and steps to address the structural causes of conflict.

Even these objectives were thought on a holistic basis, in 2000 the United Nations published the Brahimi Report – which has the surname of the former UN Secretary General and current mediator for Syrian armed conflict, Lakdar Brahimi. The mentioned report proposed a new change on UN peace missions from an increase of financial support and a more effective participation from the UN Member States.

If those proposals were not implemented – as Brahimi pointed out at the time of publication – the UN would not be able to perform peacekeeping taks in the coming years. Time has passed and Brahimi’s warning still echoes over efforts to improve peacekeeping operations policy.

Despite the proposals identified by the Agenda for Peace and the Brahimi Report, changes in peacekeeping operations become ever more necessary. The most recent document, A New Partnership Agenda: Charting a New Horizon for UN Peacekeeping, published in 2009, emerged with a new proposal: to outline a new scope only for peacekeeping operations.

Despite this proposal, the New Partnership highlighted the empowerment of peacekeeping operation in three biases: approach focusing on the mission’s purpose, its action and its challenges. Nevertheless, the document does not clarify how peace missions would be appropriate to face the armed conflict’s complexities.

Maurício Vieira is a Brazilian journalist, with a Masters degree in International Relations (Peace and Security Studies) from the University of Coimbra in Portugal. Maurício is assistant professor at the Stella Maris College of International Relations in Brazil. He was intern at the Permanent Mission of Brazil to the UN in Geneva from September to December 2012.