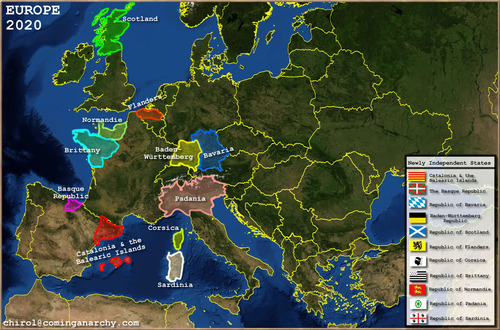 Europe’s map has changed in one crucial way already in 2014, even if most maps outside Russia will not reflect this change. The other change might be both more important and certainly less destructive than the former.

The map of Europe has changed less since 1945 than in the previous centuries. The first changes (if one excludes the self-declared Turkish Republic of Northern Cyprus) after the enforced stability of the Cold War came in 1990/1 in Germany, Yugoslavia and the Soviet Union, followed two years later the disintegration of Czechoslovakia. After the upheaval of these first post-Cold War years, there as a break until 2006 and 2008 when Montenegro and Kosovo became independent and Abkhazia and South Ossetia declared independence, even without much success at international recognition(arguably consequence of the state disintegration in 1991). 2014 has already seen one change of border, the occupation and annexation of Crimea by Russia, the first conquest of territory by another country in Europe since the Turkish occupation of Cyprus in 1974. The second might be Scotland next week. Scottish independence, if the ‘yes’ campaign is to be successful, is everything Crimea was not, democratic, pluralistic and liberal. Yet, both would have major repercussions for Europe. The relative ease with which Russia annexed a territory does not only highlight weakness of Europe’s order, but also that for all the talk of post-something international relations, countries occasional grab land and annex it and get away with it because they are big and more determined than their critics.

If the Russian land grab is a reminder that old style territorial politics is not dead, Scotland shows the possibilities of a liberal democratic order that allows for self-determination, including the right to secession of its units. The fact that such a referendum takes place sends a positive signal, i.e. that a self-determination dispute is best resolved through a mutually agreed democratic process. This sends a strong signal to both democratic states (e.g. Spain) and secessionist movements that the way to resolve disputes is through agreement and democracy.

While the process is encouraging and has positive features,a outcome that would result in Scottish independence has its risks. As Joseph Weiler has argued national self-determination stands in contrast with the goals of the EU which seek to pool sovereignty and emphasizes integration over separation. Thus, if we support the European project, secessionist projects, be they pro-EU like the Scottish one, appear fundamentally to be in conflict with such goals. However, there is a paradox here: the strongest supporters of keeping complex states together, not just in the UK, are often those hold conservative and Euroskeptic views. It is an oddity that the Conversatives and UKIP that support the complex multi-layered United Kingdom are most skeptic towards the complex and multi-layered EU. Smaller units emerging from larger nation states are thus not necessarily “half-savage relics” sulking on their own rock, as John Stuart Mills described them in his treaties on representative government  (“Nobody can suppose that it is not more beneficial to a Breton, or a Basque of French Navarre, to be brought into the current of the ideas and feelings of a highly civilised and cultivated people — to be a member of the French nationality, admitted on equal terms to all the privileges of French citizenship, sharing the advantages of French protection, and the dignity and prestige of French power — than to sulk on his own rocks, the half-savage relic of past times, revolving in his own little mental orbit, without participation or interest in the general movement of the world. The same remark applies to the Welshman or the Scottish Highlander as members of the British nation”). They are, however, less diverse and likely to be more provincial. Yet, such a distinction is hard to grasp and also not necessarily the consequence of the location of national boundaries and subject to other levels of integration, not least the European one.

Weiler adds a second argument, namely the prudential argument that Scottish independence would show the way for other independence movements and encourage referenda elsewhere in Europe. Not only will Milorad Dodik dressing in kilts and promoting a referenda in the Serb Republic, but elsewhere in Europe, from Catalonia to Flanders, independence movements would see this as the way. Thus, 2014 might be year when border change not just in the Eastern half of the continent, but also in the Western. The downside is clear, new independent states can cause uncertainty and difficulties for the European project, but this is more a technical argument and one that can be overcome (granted, the EU has other problems to overcome than dealing  whether and how to admit new countries that were in the EU already). On the upside, a clear negotiated path to independence can confirm a democratic and effective way of resolving self-determination disputes. The fact that they can take place peacefully and through mutual agreement, does not mean that citizens in Europe or around the world in territories with elites aspiring for independence will vote yes in a hypothetical referendum (consider the experience of Quebec). Knowing that you can leave might help reduce pressure to do so through force and ‘now’ when you know the opportunity will also be there tomorrow. Of course, there is no reason to believe that states (especially authoritarian ones) will follow the British example, but the referendum certainly proves that democratic states can voluntarily allow for part of territory to leave. I remember that while living in Belgrade ten years ago, very often a staple argument against Kosovo’s independence was that Britain would not allow Scotland to leave either–if nothing else, I am glad that the referendum is proving this view to be wrong.

Europe’s map has changed in one crucial way already in 2014, even if most maps outside Russia will not reflect this change. The other change might be both more important and certainly less destructive than the former.

Florian Bieber is a political scientist working on inter-ethnic relations, ethnic conflict and nationalism, focusing on Southeastern Europe. He is a Professor in South East European Studies and director of the Center for South East European Studies at the University of Graz. Florian is also a Visiting Professor at the Nationalism Studies Program at Central European University. He is the associate editor of Southeastern Europe , and is on the editorial board of Global Society, Ethnopolitics, Südosteuropa.

This article was originally published on Florian Bieber’s blog and is available by clicking here.