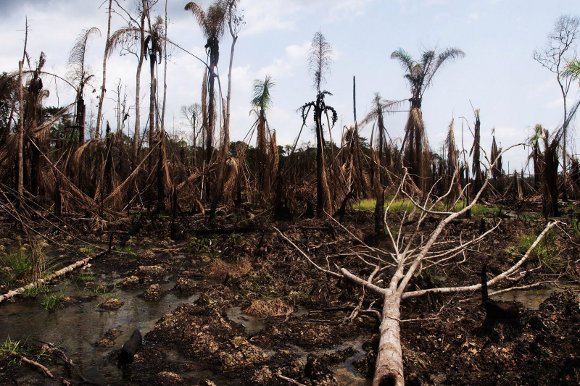 Unsustainable resource exploitation by Western oil companies has played a role in the development of grievances that subsequently resulted in the creation of rebel groups in Nigeria.

There is much to say about the on-going crisis in Nigeria, but little has been mentioned that goes beyond the kidnapping of a group of schoolgirls by the Boko Haram organization and the recent bombing of an Abuja mall. Nigeria has traditionally been a prosperous country in the region, wealth mostly driven by its strong energy industry. It is thus baffling to see the state of Nigeria being brought to its knees by a rebel movement that advocates anti-western discourse. How can such a strong state be so frail in the face of an armed insurgency? What could have brought about the yearning for groups such as Boko Haram to exist as extra-legal entities that defy the established order?

This article will endeavour to answer these questions by analyzing the current state of the country’s extractive practices, and juxtapose it with its delivery of government services. The argument proposed in this article is that unsustainable resource exploitation by western oil companies played a role in the development of grievances that subsequently resulted in the creation of rebel groups in Nigeria. As the country’s economy becomes increasingly specialized around the energy industry, individuals and groups whose livelihoods are dependent on subsistence practices become victims of the environmental effects of resource exploitation, making them more prone to generating grievances.

Nigeria’s reliance on extractive practices is worth noting. According to the Observatory of Economic Complexity, energy products in Nigeria accounted for nearly 94% of its exports in 2013. Such products are the result of the extraction of non-renewable resources such as crude petroleum, petroleum gas and to a lesser extent, the production of refined petroleum. The energy industry in Nigeria plays a significant role in the generation of overall wealth in the country, accounting for 14% of its GDP in 2013, and producing more than $100 billion in government revenue that same year.

The availability of the Nigerian government’s revenue however does not see itself fully reflected in other economic indicators. According to the United Nations Development Program (UNDP), Nigeria’s GDP per Capita has steadily increased from $1,750 in 2005 to $2,135 in 2010, while indicators such as the country’s income index have followed a similar increase from 0.404 to 0.437 during the same period. Similarly, data on government expenditure on public and health services shows a mixed pattern. Between 2005 and 2006, no variation was found in the budget for health and public services (1.9% of GDP). However, a modest 0.5% increase was provided in 2007, an amount that was subsequently unaltered in 2008. Between 2008 and 2010, there is a decreasing pattern of expenditure, whereby budgetary spending was reduced from 2.4% in 2008 to 1.9% in 2010, the same percentage allocated for these services in 2005. While following a generally increasing trend, it is necessary to point out that these surges were modest at best, and that they should be considered only as tendencies of a general, steadfast economic performance, as opposed to determinants of economic well-being at the citizen level. While these indicators point to a healthy availability of resources, they pose serious doubts over the population’s access to them.

In theory, if the availability and accessibility of resources were relatively uniform, serious challenges could be posed to the idea that extra-legal groups in Nigeria, including Boko Haram, have been created in response to sluggish economic performance alone. As follows from the data above, there is a discrepancy between the existence of resources and access to them, whereby government expenditure on public services does not correspond with the revenue generated by sectors such as the energy industry.

There is one last issue that needs further scrutiny, and that is the very nature of Boko Haram as a rebel organization. Unlike other rebel groups, whose raison d’ être is explicitly connected with the improvement of current economic, political and social conditions, Boko Haram’s mandate is devoted to undermining groups that do not have a direct connection with Nigeria’s decision-making apparatuses. Western ideological views and culture permeate Boko Haram’s very reason to exist, which makes them different than other rebel groups, which lead their fights based on domestic and national issues. Furthermore, given that Nigeria’s energy industry is dominated by western companies, it opens additional space for questions to arise.

Under such a light, and given the heavy burden posed by oil exploration and exploitation on the quality of arable soil and drinking water, it is safe to say that environmental variables do have a causal relationship with the development of anti-western grievances in Nigeria. In an economy where multisectoriality is superseded by a one-industry model, individuals directly involved in the production of subsistence goods rarely benefit from such a model. Considering this trend, combined with the idea that western companies are directly involved in the depletion of the very resources necessary for the development of healthy and wide subsistence networks, it is not too adventurous to conclude that western oil exploitation in Nigeria was a factor in the development of grievances that subsequently led to the creation and growth of organizations such as Boko Haram.

If the argument presented here is true, then what options are left for peacemakers wanting to stop violence in Nigeria? As environmental factors such as climate change, land degradation and resource scarcity continue to take the forefront on the generation of organized violence, it is essential for decision-makers to reconceptualise the very idea of why individuals decide to take arms. Conventional streams of thought that typically phrase causal rationales for war in terms of economic, social or political variables fail to recognize the increasingly crucial role of environmental phenomena in conflict situations. What is perhaps more pressing is the yet-to-be institutionalized belief that we may no longer disassociate the economic, social and political conceptions of life from the environment. If this status quo remains, so will our collective path towards violence.

Adan E. Suazo is Coordinator of the Loyola Sustainability Research Centre at Concordia University, Canada. His research focuses on the relationship between environmental degradation and the peace processes.

If you are interested to contributing to the debate on conflict and conflict transformation in Nigeria, then please contact TransConflict by clicking here.