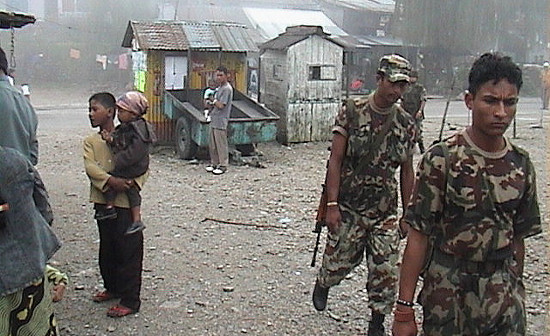 It is imperative that young people involved in armed groups receive effective rehabilitative support, are given pathways to employment, and are given opportunities for constructive social interaction to ensure their inclusion in post-conflict Nepal.

Although the activity of Nepali armed groups has decreased significantly in recent times, a taskforce under the Constituent Assembly’s (CA) Constitutional Political Dialogue and Consensus Committee is currently in talks with different armed outfits in the Eastern Hills and the Terai. The committee aims to solicit their views on constitution writing and the delineation of federal provinces, provided the groups give up arms and armed activities.

Including voices from outside of the CA is certainly a good development. However, this is not the first time that the government and armed groups have been engaged in such talks. Despite frequent changes in government coalitions and ministerial representation, the Nepali government managed to hold several rounds of negotiations with at least 18 armed groups between 2008 and 2012. Though they were reaching agreements, formal mechanisms to institutionalise ongoing talks or to address the grievances put forth by armed outfits were never implemented.

The failure on the part of the government to institutionalise the talks is due to its ongoing struggle for conceptual clarity on whether the armed groups in question are political or criminal in nature. Unlike the Maoist rebels, the armed outfits do not present a direct threat to the state, lack clear structure, and are prone to splintering.

The SSP was introduced to improve law and order across the country by considerably expanding the local presence of the Armed Police Force – a force that was set up in 1998 to fight the Maoist insurgency. Since the introduction of SSP, extra-judicial killings of alleged members of armed groups have risen. In 2010, the Office of the UN High Commissioner for Human Rights reported an alarmingly high number of deaths in custody and other encounters.

The mixture of hard and soft tactics has helped improve the security situation in some areas of the Terai and Eastern Hills. There were more than one hundred armed groups in 2009. By 2012 the government estimation was that around a dozen groups were still active, while about twenty had given up their armed struggle and were negotiating with the government.

The peace talks have been simple. The government delegation meets with the leadership of the armed group in question. In the preliminary phase, meetings tend to focus on the handover of weapons and reaching an agreement on the discontinuation of violent activities. In return, the government grants an amnesty and initiates the release of key leaders and cadres, permanently withdrawing legal cases against them. Subsequently, both parties focus on resolving more systematic issues that fuel the armed group’s grievances.

While government officials and media are quick to point to the decline of armed groups, they rarely explain what changes have caused it. Nor do they analyse the characteristics, organisation, or conduct research into the recent increase of other forms of armed violence and criminality in both rural and urban areas of Nepal.

Armed groups proliferated following the signing of the Comprehensive Peace Agreement in 2006. Their concentration and activities were mainly in the Terai, the Eastern Hills and Kathmandu Valley. The majority of those involved in armed and criminal activities are young males, mainly local criminals and unemployed youth. Their involvement has also contributed to an increase in the use of small arms in these areas.

Alongside these government led initiatives, there are other governmental and non-governmental activities designed to promote peace and reconciliation in areas affected by armed groups. It is expected that the incentive to resort to armed activities will diminish if underlying grievances and structural causes of insecurity are addressed. At the forefront of these efforts is the Ministry of Peace and Reconstruction, which has supported the establishment of so-called Local Peace Committees (LPCs). Composed of prominent community representatives, including political parties, the LPCs are expected to defuse crises before they lead to violence.

Given Nepal’s situation, it is very important that the government is addressing the underlying reasons that allowed armed outfits to emerge in the country. The constant political instability and uncertainty, fragile economic outlook, the state’s continued inability to establish law and order, the criminalisation of politics, and the persistence of youth unemployment have all been cited as causes of the re-emergence and flourishing of armed and criminal groups. Unless we address the crux of these problems, the threat posed by armed groups is not likely to go away.

Government and donors should be working to launch relevant plans and policies that will encourage peace, development, and youth centred programming. We need to ensure that young people involved in armed groups receive effective rehabilitative support, are given pathways to employment, and are given opportunities for constructive social interaction to ensure their inclusion in post-conflict Nepal.

Subindra Bogati is the Chief Executive of the Nepal Peacebuilding Initiative, a Nepalese peacebuilding organisation.

For more about armed groups in Nepal, please read “The Missing Middle: Examining the Armed Group Phenomenon in Nepal” (PDF)