TransConflict is pleased to showcase the work of the Center for Peacebuilding (CIM) from Bosnia-Herzegovina, a member of the Global Coalition for Conflict Transformation.

Almost twenty years on from the end of the war in Bosnia-Herzegovina, the challenges of peacebuilding and reconciliation remain pronounced. The Center for Peacebuilding (CIM) is a non-governmental organization – located in Sanski Most, Bosnia and Herzegovina – that seeks to rebuild trust and foster reconciliation among the people of Bosnia – Croats, Serbs, Bosniaks, and others – as well as support peace processes in other countries that have suffered from violent conflict. CIM’s motto is “naš put je mir” (“our way is peace”).

Founded in 2004 by Vahidin Omanovic and Mevludin Rahmanovic, CIM is based in Sanski Most, in the north-west of Bosnia-Herzegovina. As CIM notes, “Even twenty years after the start of the war in Bosnia, deep physical and psychological divisions remain throughout society. Many Bosnian schools are ethnically segregated, and parents and family units who suffer from war-time trauma pass down negative stereotypes and perceived threats to the younger generation.”

Establishment of Sanski Most Inter-Religious Council

In April 2015, after ten years of sustained inter-religious dialogue, CIM finally achieved the establishment of an Inter-Religious Council in Sanski Most. The local head Imam, Husein ef Kovačević, a Catholic priest, Ivica Matić, and an orthodox priest, Alen Marić, respectively, agreed to work in unison to promote reconciliation and tolerance. These same leaders have previously presented resources for peacebuilding in their respective religious traditions, thereby setting a positive precedent for constructive inter-religious interaction. As part of these inter-religious efforts, CIM organizes an annual public Iftar in Sanski Most to mark this important Muslim tradition. In addition, CIM has supported the establishment of an inter-religious choir, “Harmony” and organizes a festival of choirs, involving women’s and mixed choirs from all over Bosnia-Herzegovina.

CIM has long engaged religious leaders, focusing in particular on the coexistence of three religions of Bosnia-Herzegovina and how one can ‘Love thy neighbour.’ Such discussions have focused on common family values within each religious tradition, plus their respective perceptions on mixed marriages; which were common in Bosnia before the war of the early nineties. The speakers also explored the concepts of love and caring, and their importance between neighbours.

CIM has been conducting peace camps ever since its founding, providing young people from different backgrounds with the opportunity to learn about peacebuilding and conflict resolution. Participants also have the rare opportunity to discuss the history of war and ethnically-based prejudice in Bosnia-Herzegovina, plus other taboo topics, while learning skills in nonviolent conflict resolution. This includes discussions on identity, stereotypes, discrimination and narratives of the Bosnian War, plus cycles of revenge and reconciliation. In order to ensure that the participants can provide trainings in their own communities, they create and conduct their own workshops. 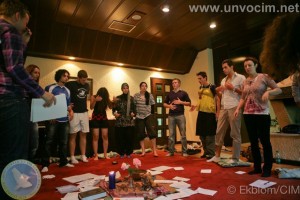 Cognisant of the trauma endured by many of Sanski Most’s local population during the war of the nineties, and the profound effect it has psychologically and physically on the lives of victims, CIM has employed Cranio Sacral Therapy to help relieve traumatic stress and its side effects. In collaboration with the Swiss NGO “Baklava”, CIM organized a three-year education program in Cranio Sacral therapy, resulting in therapy sessions being offered to over a thousand patients.

A central element of CIM’s expansion plans is the development of a Peace Embassy, which would provide secular space for members of the local community, in which tolerance and dialogue can be fostered. The Peace Embassy’s sustainability would be ensured through social enterprises such as:

CIM works at the local, national, and international level to promote sustainable conflict transformation and peacebuilding. CIM’s holistic approach addresses conflict and trauma in both individuals and larger groups. The core of CIM’s work is to (re)build relationships that were destroyed during the neighbour-on-neighbour violence of the war. Over time CIM works to build trust and train people as leaders in conflict resolution. CIM’s activities have brought together “men, women, and youth, from rape victims, camp survivors, and war veterans to diverse religious leaders”. In this way, CIM promote individuals to become agents of change and seeds of peace in themselves, their personal relationships, and their own community. Step-by-step, person-by-person, and community-by-community CIM transform traumas into sustainable peace.

CIM is a recipient of a Tomorrow’s Peacebuilders Award, organized by Peace Direct, which supports grassroots peacebuilding efforts globally, through an emphasis on local ownership and local solutions that prevent conflict. The award is recognition of CIM’s efforts on the ground to transform conflict in Bosnia-Herzegovina.