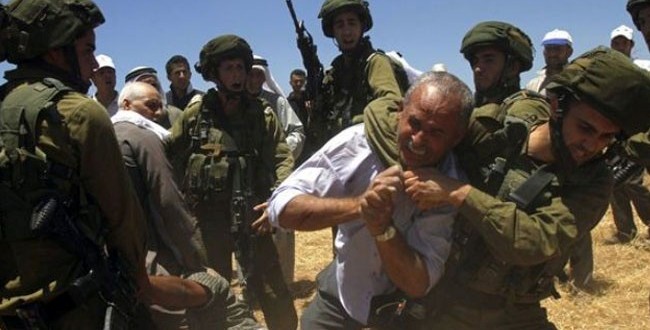 Palestinian activists are faced with knowing that their unarmed resistance, whilst it has attracted international civil society support, has failed to exercise any leverage over Israel.

On 24th November 2015 the US secretary of state John Kerry expressed his solidarity with his Israeli hosts when he remarked, “Clearly, no people anywhere should live with daily violence, with attacks on the streets, with knives, with scissors, cars.” It is just a pity that he did not add that so long as Israel continues its illegal occupation of the Palestinian territories Israelis will continue to face differing forms of Palestinian resistance.

The return of direct violence to the Israeli-Palestinian conflict must be a matter of concern to all who dream of sustainable peace in the region, but it can come as no surprise: it is a direct result of the Israeli government’s determination to normalise Israel’s occupation, now nearly 50 years old.

In our recent book (co-authored with Marwan Darweish) Popular Protest in Palestine: The uncertain future of unarmed resistance, we explored the history of Palestinian unarmed resistance to occupation, with a particular focus on the wave of protests that accompanied the construction of the Israeli separation wall/barrier and the accelerated pace of dispossession occasioned by the expansion of Israeli settlements in the West Bank. Underpinning the research project upon which the book is based, was our hope that we might find ourselves chronicling a burgeoning movement of nonviolent resistance of such a scale and effectiveness as to render the continued Israeli occupation of the lands captured in 1967 untenable.

What we actually found was more sobering and disturbing. Our pessimistic conclusion was that the most recent wave of unarmed resistance had failed to exert sufficient leverage on Israeli publics and decision-makers to cause any re-evaluation of the occupation. This was expressed most directly by one of our informants—an Israeli peace activist:

“The worst thing for Israel is peace and quiet. If the occupation continues there is no future for Israel. The weakening of Palestinian popular resistance allows the occupation to continue. People here in Israel—they just don’t realise, they don’t have to deal with the occupation. There was the second intifada—nothing came out of that and the buses being blown up. Now the buses are not being blown up and still nothing comes out of it. Israelis are comfortable with the situation…people look the other way…people live with it…But it will blow up.”

On the Palestinian side we interviewed scores of courageous community leaders and activists who were struggling to maintain their hope and commitment in the face of daily personal, cultural and structural violence of the occupation, and the growing awareness that under the camouflage of a so-called peace process Israel was deepening its occupation, whilst the ‘international community’ was failing to hold Israel accountable for its ongoing gross abuse of Palestinian human rights.

Nowhere was this despondency more apparent than in the neighbourhoods of East Jerusalem where Palestinians live under direct Israeli rule. Here are short extracts from interviews carried out with two community activists from Silwan, a Palestinian neighbourhood directly adjacent to the walls of the Old City.

J: “Here there are daily clashes with settlers…There are confrontations and provocations from armed settlers in addition to all the social deprivation—poor schools, unemployment. The young are suffering. It makes them angry, and it is easy to provoke them…we are close to our limit—we cannot take it anymore.”

A: “Many countries in the world break international laws, and they suffer sanctions, but Israel acts with impunity. We can expect nothing from the international community…Everything is on a knife-edge with all the pressure…People feel…they have lost…that they have nothing to lose.”

State powers such as the USA and the EU have done little to pressure Israel, thereby contributing to the anger and desperation of Palestinians who feel cheated and humiliated by a ‘peace process’ that has resulted in nothing but an intensification of the Israeli occupation. By contrast to the indifference of states who have done nothing to challenge the impunity enjoyed by Israel, there has been increased involvement of international solidarity activists supporting Palestinian grassroots protests over the last decade. These activists have played their part as accompaniers and witnesses in a range of protest actions, but their most important role has been as advocates for the Palestinian cause in their own countries.

There is a kind of symbiotic relationship between the Palestinian popular struggle and the advocacy work of the international solidarity networks—the solidarity activists depend on the popular unarmed resistance of Palestinians (and their Israeli partners) to feed their international campaigns to delegitimise the Israeli occupation. As one of our informants explained: “International solidarity activists want to know that there is something happening here around which they can mobilise—and around BDS.”

So, whilst Palestinian popular resistance has proven to be relatively weak in relation to its direct impact on Israeli decision-makers and publics, their presentation of themselves as brave people struggling for their basic rights by unarmed means against an illegitimate and brutal occupation can resonate strongly through international networks of sympathisers. These networks can then use the examples and the stories of resistance to shame the Israeli occupation regime in the eyes of wider constituencies around the world. In their turn such people—links in the great chain of nonviolence—can exercise pressure on their own politicians and policy-makers to take action. And so, like the flight of a boomerang, the protests and demands of the Palestinians resisting occupation on the ground can pass through various agents who in their turn can exercise a level of influence over Israeli publics and decision-makers.

This at least is the theory and the model. But reality seems once again to be reluctant to conform to the vision, and as a consequence the Palestinian activists are faced with the most painful of dilemmas. They know that any act of lethal violence by Palestinians will feed into Israeli perceptions and propaganda of ‘Palestinians are terrorists’. But they also know that their unarmed resistance, whilst it has attracted international civil society support, has failed to exercise any leverage over Israel.

In such a catch-22 situation it is surely the responsibility of international civil society networks to develop more effective strategies to influence publics and policy-makers. The aim must be to intensify pressure on Israel to commit to withdrawing from the occupied territories, and thereby not only freeing Palestinians from the violence of occupation but also liberate the Israelis themselves from the evil of occupation.

Andrew Rigby is Emeritus Professor of Peace Studies (Coventry University) with a life-long interest in nonviolent means of resistance and change.