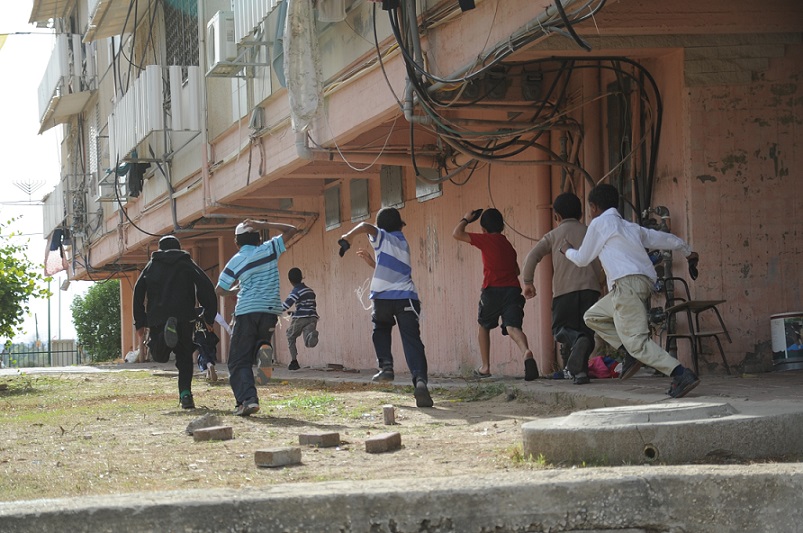 Even after seven decades of bloody conflict, neither the Israelis nor the Palestinians can afford to resign themselves to the status quo. They have the solemn duty to pass on to the next generation the lessons of the futility of violence, and that peace will come only in the absence of violence.

The use of violence to end the occupation has not served the Palestinian cause well, instead making matters worse as it hardened the resolve of successive Israeli governments to deal with violent extremism with an iron fist. The current bloody clashes, often referred to as the ‘Knife Intifada,’ and the killing of innocent Israeli bystanders outraged just about every Israeli regardless of their political leanings (and for good reason), when in fact the Palestinians need to draw the Israelis to support their cause. It is time for the Palestinians to seek other means by which to convey to the Israelis and the international community the intolerable conditions and misery under which they have been living for decades. They must do so through persistent and collective civil disobedience and irreproachable non-violent non-cooperation.

Notwithstanding their suffering and despair under occupation, the Palestinians have been led astray by their own leaders, as they have failed to mobilize the majority of Israelis who seek peace to support their legitimate cause. On the contrary, through their acrimonious narrative and acts of senseless violence, they have managed to alienate this critical segment of the Israeli population whose support they need the most.

Though civil disobedience is not alien to the Palestinians, they often resorted to violence as their first choice. After seven decades of largely violent conflict, the Palestinian people must now come to the conclusion, if they have not already, that violence against the Israelis is counterproductive and only plays into the hands of the extreme right and weakens moderate Israelis.

Moreover, no matter what kind of violence the Palestinians employ, Israel will prevail now and for the foreseeable future. This leaves the Palestinians with a single option—civil disobedience—which requires immense courage, patience, and inner strength, and will prove to be far more potent than any violent act, provided they never resort to violence regardless of intimidation and even violence used against them by Israeli forces.

Past violent confrontations between the two sides offer a telling story. The first Intifada (1987-1993), which started as a non-violent mass demonstration, was transformed into violent resistance where more than 1,000 Palestinians were killed. The second Intifada (2000-2005) was violent from the start with armed attacks, fire bombs, and suicide bombings, which led to an Israeli counter-offensive inflicting massive destruction in the West Bank, with a death toll of nearly 4,000 Palestinians and more than 1,000 Israelis. This deeply disillusioned every Israeli and deepened their distrust of the Palestinians.

Remaining passive to the occupation is entirely unacceptable to most Palestinians as they continue to suffer with little or no hope for the future. Many Palestinians believe that Israel will happily settle for the status quo by maintaining the occupation and expanding the settlements, all while making the Palestinians’ lives unbearable in order to force them to leave.

The current clashes seem intended, from the Palestinian perspective, to engage the Israelis in a low level of violent resistance to prevent massive retaliation. It also sends a clear message that the occupation offers no security if only a handful of Palestinians can create such havoc throughout the country.

What has not been given much attention is civil disobedience, which is perhaps the most effective way to change the dynamic of the Israeli-Palestinian conflict. There is no better time than now to embrace non-violence to make their case.

To be effective, civil disobedience must take the form of collective peaceful resistance. The narrative and actions of Palestinians should be focused on their state of affairs, but there must be no preaching of violence, incitement, nor reacting to violence with violence, which can only bestow a strong moral component to their cause.

The 1960s US civil rights movement offers a close parallel to what the Palestinians could adopt as their framework of resistance. The injustice in this context is the occupation itself, governed by military laws which by their very nature are discriminatory and abusive; thus, peaceful defiance of the laws of the occupation is called for.

Martin Luther King Jr. put it succinctly when he said: “An individual who breaks a law that conscience tells him is unjust, and who willingly accepts the penalty of imprisonment in order to arouse the conscience of the community over its injustice, is in reality expressing the highest respect for the law.”

Civil disobedience includes many measures geared toward raising the Israeli public conscious because ultimately, the Palestinians’ best weapon is to mobilize the Israelis themselves to demand from their government an end to the occupation, which best serves Israel’s national security interest.

Such tactics include: engaging in silent protests in front of checkpoints and along the separation barrier, burning Israeli-issued ID cards, ‘Freedom Rider’ style protests (riding on buses normally used by settlers), peaceful demonstrations especially by Palestinian women, large solidarity marches, occupying strategic public places, ‘die-ins’ (where a large number of people lie down and refuse to move), chaining oneself to objects and to one another, defying curfews and laws that ban the flying of the Palestinian flag while strictly prohibiting the burning of Israeli flags, and filling Israeli jails by peacefully surrendering to the Israeli security forces, which is extremely costly, burdensome from a security perspective, and demoralizing to the Israelis.

As Mahatma Gandhi observed: “An unjust law is itself a species of violence. Arrest for its breach is more so. Now the law of nonviolence says that violence should be resisted not by counter-violence but by nonviolence. This I do by breaking the law and by peacefully submitting to arrest and imprisonment.”

During all peaceful demonstrations and marches, the Palestinians should carry banners featuring slogans such as “we want peace,” “we want justice,” “we want a two-state solution,” “we respect Israel’s right to exist,” “we want peaceful coexistence,” “enough hate and enough pain,” etc., which would challenge deep-seated notions among Israelis that Palestinians want to destroy Israel rather than make peace.

As Mubarak Awad, one of the Palestinians’ foremost pioneers of civil disobedience during the first Intifada, eloquently stated: “When you are willing to sacrifice everything for your freedom—without arms, even without stones—even if the government attack you, the Israeli public will have to see you in a different way. We have to make them choose what kind of people they are.”

This type of civil disobedience would strengthen the hands of the Israeli peace movement and encourage them to engage in similar non-violent non-cooperation in solidarity with the Palestinians, which would be a game-changer.

More importantly, engaging in civil disobedience will have a psychological effect on the Palestinians themselves as they will discover that persistent non-violent resistance is the most powerful way to positively impact the peace process and set the tone for peaceful coexistence.

Even after seven decades of bloody conflict, neither the Israelis nor the Palestinians can afford to resign themselves to the status quo. They have the solemn duty to pass on to the next generation the lessons of the futility of violence, and that peace will come only in the absence of violence.