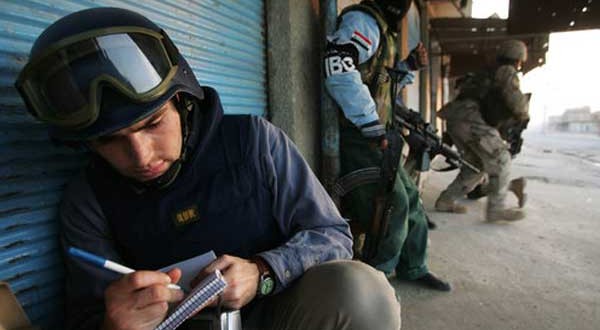 War journalism is exactly what keeps war alive. It is the frontrunner element that campaigns for the prolonged business of war. In contrast, peace journalism doesn’t concern itself with the winner-versus-loser rhetoric, but rather zooms right into the root of the very issue. It presents the causes and options of every side involved, without introducing the ‘us’ versus ‘them’ perspective.

During the Rwandan Genocide, radio was one of the key enablers in orchestrating the genocide – pointing out localities where the Tutsis were so Hutu militia could find and kill them. In doing so, the media exacerbated tensions and channeling hatred, contributing to genocide. In Serbia, television was deployed to convey propaganda that would stir ethnic tensions in the run up to the civil war. In the former Soviet Republic of Georgia, nationalist mythology was propagated by the media, and deployed to exacerbate the already simmering tensions over boundary disputes. Years later, even if the media hasn’t been so proactively involved in facilitating conflict and genocide, a subtle undercurrent that borrows from these instances continues.

War journalism is exactly what keeps war alive. It is the frontrunner element that campaigns for the prolonged business of war. For the uninitiated, as the name suggests, War Journalism refers to journalism that is focused on war, and encourages a presentation that [1] is heavily-oriented towards violence and projects the conflict arena in a two-party and one-goal deal. It confines itself to closed spaces and time, and studies the cause and effect only in the arena. It typically concerns itself only with the visible or tangible effects of violence, making the conflict opaque. The focus is on an ‘us-and-them’ rhetoric while seeing the enemy ‘them’ as the problem and dehumanising them. War journalism is heavily reactive in that it waits for violence to start before it does or says anything, and is heavily propaganda-oriented, seeking only to expose ‘their’ untruths while helping to cover up ‘our’ own flaws.

It tends towards the elite, by focusing on ‘their’ violence and ‘our’ suffering, calling ‘them’ evildoers and focusing only on the elite segments of society – spokespersons and peacemakers. In sum, what War Journalism does is create a hype that gets everyone to say “Never Again” and employ powerful sounding hashtags – but it stops with that. Once the conflict is resolved or becomes old news, there is a massive decline regarding concern over the issue, yet without ever understanding the root of the problem in the first place. This leaves a sort of Band-Aid on the sore, without any concern for preventing the conflict from recurring.

In contrast, Peace Journalism doesn’t concern itself with the winner-versus-loser rhetoric, but rather zooms right into the root of the very issue. It portrays conflicts in realistic terms and encourages the exploration of backgrounds and contexts of conflict formation. It presents the causes and options of every side involved, without introducing the ‘us’ versus ‘them’ perspective. It effectively serves the purpose by [2] being transparent in the representation of the causes, background and issues concerning a conflict; giving a voice to the rival parties involved and their views; exposing lies, cover-ups and attempts to cover-up as well as culprits on all sides unequivocally; revealing the suffering inflicted on people of all parties involved in the conflict; paying attention to peace stories and efforts for peace and providing information on post-war developments. Peace Journalism is about transparent journalism that relies on facts and explores the reality of the situation.

The danger in war journalism

Take any conflict in the world today: be it Syria or the ongoing occupation of Palestine, or the tensions between India and Pakistan vis-à-vis Kashmir. There are a range of different narratives, conflicting ones no less. Each passes off a version as the truth, some building on propaganda and a political agenda that they are either paid for, or were founded for, in the first place. This makes getting an accurate idea of the events around the country or the issue virtually impossible.

Assessing the role of the media globally, it is no guess that Syria presents a torrid dilemma. With the many units of opposition and the regime baying for each other’s blood, there are scores of outlets that offer partisan accounts of the news. India’s recent spate of events in the context of a university and a student’s arrest on the charges of sedition reveals many chinks in the media armour. Ethics continue to be flouted with tampered videos being passed off as news, media houses imposing value judgments and aligning themselves by taking sides.

That a biased report or one constructed on untruths can culminate in distrust, disillusionment and cynicism about the media is a given. In an already polarised society that is divided, or on the brink of conflict, a section of the society can end-up feeling disadvantaged. Their voices being silenced renders the essence of a democracy redundant.

A community of people who subscribe to such forms of media reporting, where violence continues to remain the key theme, will be more inclined to sponsor or create conflict. The saying that history is written by the hands of the victors rings true in the context of the media. Accordingly, the foundations of hatred will continue to be built upon, and a future citizenry swearing by hatred and anger will be built on the founts of false or incorrect or unverified information.

What role should the media play?

The media as a platform is meant to crystallise public opinion as only one part of its duty. Its primary responsibility is pivoted around being a conduit between the incident and those who should be informed of it. This means the media has a duty to collect facts, ascertain and verify the truth behind them, and put them out before the masses in black and white. It is not for the media to insinuate, to decide, or to pass value judgment on any subject it explores. The duty of the media begins and ends with the sole duty of dispensing impartial information for public awareness. In the course of doing so, it has a duty to be blind to prejudice, and to expose facts that are grounded in committed verification.

The role of the media in containing tension by reporting pure fact cannot be emphasised enough. As a voice that offers information, the media is perhaps among the earliest to know about the country’s fragile state, or at the very least, to know where the country’s fragile areas lie. Instead of exacerbating conflict by playing up on these divisive aspects, the media should function from a place of objectivity.

Refraining from alarmist or over sensationalised reporting will go a long way towards keeping the media within its line of duty. What the media needs to be providing is wholesome information and a statement in no clear terms that what it does not know, it does not know. Bridging the objective with purported statements covered with the subjective are counterproductive at best, and only go to create space for baseless propaganda to thrive.

Kirthi Jayakumar is a legal researcher and lawyer. Her interest and experience is in peace, conflict, international law and gender issues, focusing on Afghanistan, the Middle East, DR Congo and South-Asia.