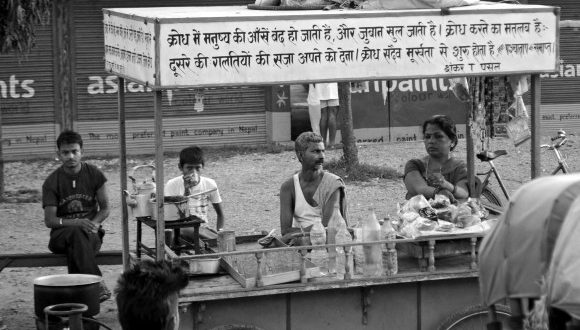 In September 2015, Nepal adopted its first democratic constitution. Since then, it has been marked by protests and blockades.

In September 2015, for the first time in its history, Nepal promulgated a constitution written by the representatives of the people. The adoption of the country’s first democratic constitution is a historic step for a nation that has witnessed years of war and natural disasters. Passed by over 90 percent of votes by members in the Constituent Assembly (CA),  the new constitution represented a prominent step forward in the country’s history.

However, although voted for by the majority of the CA members, the Madhes based political parties rejected the constitution and announced further protest programmes. They walked out from the constitution writing process while it was in the final stage in June 2015, putting forward their discontent with the process of finalising the constitution amid disputed issues that remained unresolved.

Following the walk out, the Madhes-based political parties began organising protests, calling strikes and shutdowns in Terai, a southern lowland in Nepal. They formed an alliance, the United Democratic Madhesi Front (UDMF), of some of the Madhes-based political parties to strengthen their agitation. Every school, college, university, transportation, factory, shop and market was closed down for nearly five months. The protest crippled life for people living in the Terai.

After the constitution was adopted in September 2015, despite the walkout, the UDMF introduced more protest programmes. Millions of children were denied access to schools and around 50 people were killed, including seven security personnel in clashes between the protesters and the security personnel during the protests.

The protests had far reaching effects. It was not just the people of Terai who suffered, but all Nepalese citizens due to a blockade India unofficially introduced immediately after the declaration of the new constitution

The crippling effects of blockade

The blockade stopped all vehicles carrying petroleum products, cooking gas, medicines, raw materials and foods to the Indian side of the Nepal-India border.

While India did not officially say that it imposed the blockade to show its dissatisfaction towards the new constitution, the UDMF later claimed it was at the request of India. A UDMF-organised ‘sit-in’ at the border was one of their protest strategies.

The blockade was condemned in Nepal and worldwide, and was also criticised in the Indian parliament and by the Indian people. Many said India had violated both international laws and the rights of trade and transit of the landlocked country. Researchers and economists claimed that Nepal’s economy was severely affected by the blockade effects.

On 23 January 2016, just 126 days after its declaration, two articles of the constitution were amended to address some of the demands of the agitating UDMF. The amended provision of Article 42 (1) which upholds the right to social justice, ensures that less developed communities like the Madhesi have the right to employment in state structures and public services on the basis of the principle of proportionality (based on number of population), not on the basis of inclusion as stated earlier.

Likewise, the amended Article 286 (5) ensures that population will be the main basis for delineating the constituency for the House of Representatives, while geography will be the second basis. Whilst the UDMF wanted the delineation purely on population, the amendment kept in the geography element on the basis that the population living in the upper hills and mountainous regions would be without representatives because of the sparse population living there.

A crucial UDMF demand was that there should be two provinces in the whole southern plain of Nepal. Many in Nepal see this demand as very suspicious and wonder how this could be. Many different ethnic and linguistic people live in the Terai and they find it hard to accommodate themselves in either province.

Tharu, an indigenous community living mainly in the low land of the mid-western part of Nepal has been demanding a Tharu province in the area. The UDMF had initially demanded one province and later on they demanded two provinces in the whole lowland region of Nepal. The Limbhuwan, another of the ethnic communities that mainly resides in the eastern hills and some parts of the eastern Terai, has been demanding nine districts from the eastern part, including the demand that three districts from the eastern Terai should be in Limbhuwan Province. These three districts have also been claimed by the UDMF in their two provinces’ demand in the Terai. Indeed, many parts of Terai have been subject to overlapping province demands by the different ethnic communities in the eastern and western part of Nepal. The division into two provinces would likely inflame tensions between these competing groups.

In January, the five month long blockade was ended suddenly without a formal statement from either side. Vehicles carrying fuel, cooking gas, raw materials, medicines and food that had been stopped gradually began to enter Nepal again, and the supply began to slowly improve. People are beginning to resume a normal life.

However, the Nepalese people, including those that live in Terai, are fearful of the possibility of another blockade by India in the future. Memories of shortages of daily essentials and price hikes are deeply rooted in the Nepalese people. The supply of petroleum products and cooking gas is still not in a normal condition three months after the end of the blockade. Officials claim people have been storing these due to the possibility of another blockade.

Another reason for the continued shortage are the long lasting effects of the black market that flourished during the blockade. All this serves to increase feelings of vulnerability, and concerns that basic needs cannot be met.

Now the constitution has been amended and some of the demands of UDMF have been addressed, the only alternative left to UDMF and the major political parties, government and opposition parties is to come to the negotiation table, move ahead and leave distrust behind. The people of Nepal are exhausted, and protests, strikes, shutdowns and the recent blockade have not increased hopes for the future.

In the process of declaring the new constitution, Nepal has entered into the next phase following the peace process. Now, all political parties have to become more responsible, to gain people’s trust and to bring the country into a new phase of development.

Ambika Pokhrel is Insight on Conflict’s Local Correspondent in Nepal. She has significant experience working in conflict resolution and peacebuilding, as well as conflict transformation, women’s peace and security, and collaborative leadership and dialogue.

This post was originally published by Insight on Conflict and is available by clicking here. The views represented in this piece do not necessarily reflect those of TransConflict.