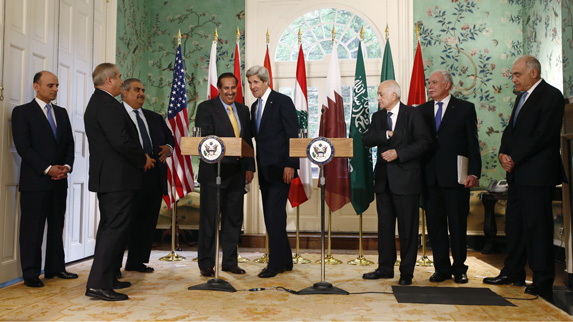 The Arab Peace Initiative (API) should not be considered as a mere device for directing the negotiating process, but rather as the central framework for achieving a comprehensive peace.

The report that was recently released by the Middle East Quartet – comprised of the United States, Russia, the European Union, and the United Nations – is a welcome step. The report reiterates the importance of reaching a peace agreement between Israel and the Palestinians on the basis of a two-state solution. Perhaps most crucially, the report concludes with a pointed observation that unless significant and tangible progress toward peace is made, the status quo will inevitably lead to further deterioration in Israeli-Palestinian relations and potentially renewed full-scale violence between the two sides.

According to the report, there are three elements that are currently aggravating the fragile state of affairs: first is the ongoing (albeit sporadic) violence; second is the continued expansion and legalization of settlements; and third is the illicit build-up of arms, specifically by Hamas.

To reverse these trends, the Quartet recommends that no unilateral action should be taken by either side – for example, the annexation of more territories by Israel, or new attempts by the Palestinians to ‘internationalize’ the resolution of the conflict – and that both sides demonstrate sincere commitment to achieving a two-state solution.

The Quartet also calls for ending incitement, ceasing settlement expansion, refraining from ‘provocative actions’, and fostering a ‘climate of tolerance,’ and although all are necessary, the report does not provide any new insights, nor does it establish a framework that could lead to a durable solution to the Israeli-Palestinian conflict.

Nevertheless, the Quartet report is important in bringing back the Israeli-Palestinian conflict to the attention of the international community, stressing the need to begin serious negotiations to reach an agreement and warning that, otherwise, they will both suffer dire consequences.

That said, while the Quartet recognizes the dire situation in the Middle East now, it fails to take into account the reality on the ground and the psychological dimension of the Israeli-Palestinian conflict, which has and continues to impede any progress.

Indeed, given the venomous relationship between Israel and the Palestinians, it does not allow for the implementation of any peace initiative, either unilaterally or through international involvement. Therefore, the situation on the ground must first change to create a conducive environment for both sides to make the necessary concessions.

As a result, neither Israel nor the Palestinians are able, even if they were willing, to make the necessary compromises in the current atmosphere. They have and continue to defy repeated calls by the Quartet and the US to solve the conflict, and ignored numerous UNSC resolutions (including 242 and 338) which called on Israel and the Palestinians to solve their conflict based on a two-state solution.

To that end, I strongly feel that any future negotiation must be preceded by a process of reconciliation in order to address three critical issues: mutual distrust, concerns over security, and the illusion that either side can have it all at the complete expense of the other.

Although the Quartet’s report briefly mentions the importance of the Arab Peace Initiative (API), in my view, the API should not be considered as a mere device for directing the negotiating process, but rather as the central framework for achieving a comprehensive peace.

There are a number of facts that distinguish the API from any other framework for peace: First, it originated from the Arab states (led by Saudi Arabia), to which they relate, rather than from the outside the region, as does the Quartet, which has no Arab representation.

Second, the API provides all parties to the conflict – including Hamas and Israel, who have not embraced it as of yet – several common denominators on which they agree, though they have not, for strategic reasons, accepted them publicly, including the Palestinian refugees, national security, the disposition of the settlements, and the future of Jerusalem.

Third, the API offers a realistic framework for a peace agreement between Israel and the Palestinians in the context of a comprehensive Arab-Israeli peace, which both sides desire.

Finally, it is important to note in this regard that the API was not offered on a take it or leave it basis, as was portrayed to the Israeli public. All of the conflicting issues are subject to negotiation between the two sides if there is any true intention by both sides to reach an agreement.

In this regard, I believe France’s initiative to resume Israeli-Palestinian negotiations is critically important. France is trying to take a different approach to solving the conflict, and is considering the API framework to that end.

I maintain, however, that the French initiative must pay specific attention to the need to psychologically prepare both sides through a process of reconciliation (people-to-people interaction) before the resumption of formal negotiations to dramatically enhance the chance of succeeding.

There is no doubt that under any circumstances the peace process has become ever more intractable over the past decade and will further deteriorate and potentially lead to a major conflagration that neither side wants but is doing little to avoid.

France’s international conference, to take place toward the end of the fall as a follow-up to the first conference that took place on June 3rd, will certainly generate greater momentum to resume peace negotiations. It must, however, offer international mechanisms starting with the process of reconciliation that could potentially lead to a comprehensive Israeli-Palestinian peace.

The Israeli-Palestinian conflict has reached a point of saturation which is bound to explode. Any voice that raises the attention of the international community to prevent a catastrophe in the making is a welcome one.

It is time to act, and in that sense the Quartet has made its contribution. It must now be translated into a workable framework, which only the API can provide.