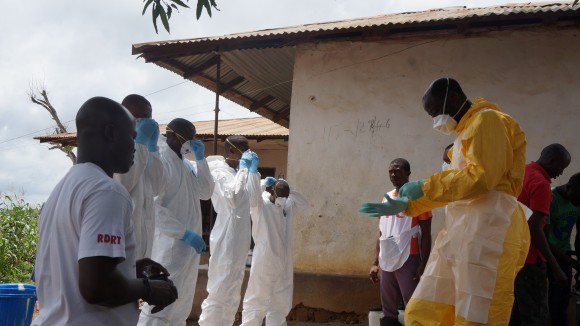 Debate on whether President Ernest Bai Koroma should stand for a third term in Sierra Leone is intensifying.

Supporters of Sierra Leonean President Ernest Bai Koroma have mounted a campaign for an extension of his term beyond February 2018. Critics say this would violate the two-term limit imposed by the constitution. And there is a clear split of opinion on the move for “more time,” as the debate is known in Sierra Leone, not least in civil society. One anti-more time campaigner is Edmond Abu Junior, who is the Executive Director of Native Consortium and Research Center.

“The entire more time debate is illegal and undemocratic,” he says. “It does not guarantee peace and should not be discussed. Ernest Koroma’s predecessor, the late President Kabbah, was given more time in office because the country was at war and the Constitution validated it.”

National Coordination for Civil Rights Coalition representative Alphonso Manley believes the opposite. He is pushing for an extension of term for the president.

“Democracy is moved by the wishes and aspirations of the people. We as young people are in the majority. We think that judging from the development strides undertaken by President Koroma’s administration and the 18 months disturbance of Ebola, his term should be extended.”

As Manley says, proponents of the more time campaign argue that Koroma’s second term in office was hindered by the outbreak of Ebola in 2014, which killed 4,000 people in Sierra Leone. They argue that Ebola devastated the economic fabric of the country and prevented the administration from successfully implementing its development agenda. For this reason, they say, the president should be given ‘more time’ to compensate for the lost period.

Edmond describes this as ludicrous. “If Ebola is cited, then both Liberia and Guinea should have also called for extension of terms. But they went ahead and conducted elections despite the Ebola scourge. So what is different in Sierra Leone’s context?”

I asked constitutional lawyer Solomon Jamiru what he thought about the debate. He drew my attention to Section 46 of the 1991 Constitution of Sierra Leone, which says “no person shall hold office as president for more than two terms of five years each, whether or not the terms are consecutive.”

But although the constitution is clear about term limits, the more time campaigners are still hopeful. One factor is the decision by the National Electoral Commission (NEC) to defer local council elections to 2018, when they were initially slated for 2017. If these are to be held in 2018 instead of 2017, then according to these campaigners, why not the Presidential election as well?

A hugely anticipated decision is the outcome of the Constitutional Review Committee (CRC) process. The CRC was set up two years ago by the government to review Sierra Leone’s constitution and make recommendations to be validated through a referendum.

Osman Turay lives in Freetown. “There is a lot at stake around this more time issue. Sierra Leone has been through a wave of turbulent past: the war, and most recently Ebola. We must therefore tread carefully for the sake of peace and national cohesion.”

According to lawyer Solomon Jamiru, the Constitution does not provide for a blanket ban, with some exceptions possible: “Section 49 (2) says that war can be a precondition for the extension of a presidential term.” However, there is another interesting catch. Section 1, “which has been hugely alluded to because of the interruption of the Ebola virus,” also says that a state of public emergency is grounds for extending the term limit.

Edmond from the Native Consortium and Research Center say that does not matter. “The instances cited by the more time campaigners are not realistic and are not within the spirit and intent of peace and security. Wisdom should be applied in this situation, otherwise the implications for more time will be very costly.”

The president and his government have been surprisingly coy on the issue. After months of speculation, former Minister of Information and Communication, Alpha Khan, made this pronouncement on the BBC’s World Service: “Calls from some sections of the country for the president to be given more time are the expression of gratitude from a grateful population who believes that President Koroma has worked hard enough.”

He said that President Koroma himself has not made any public pronouncement on this issue, that the people were merely exercising their democratic rights, and that the president will listen to the wishes and aspirations of his people. Koroma’s continued silence has kept many speculating. The public is waiting with bated breath.