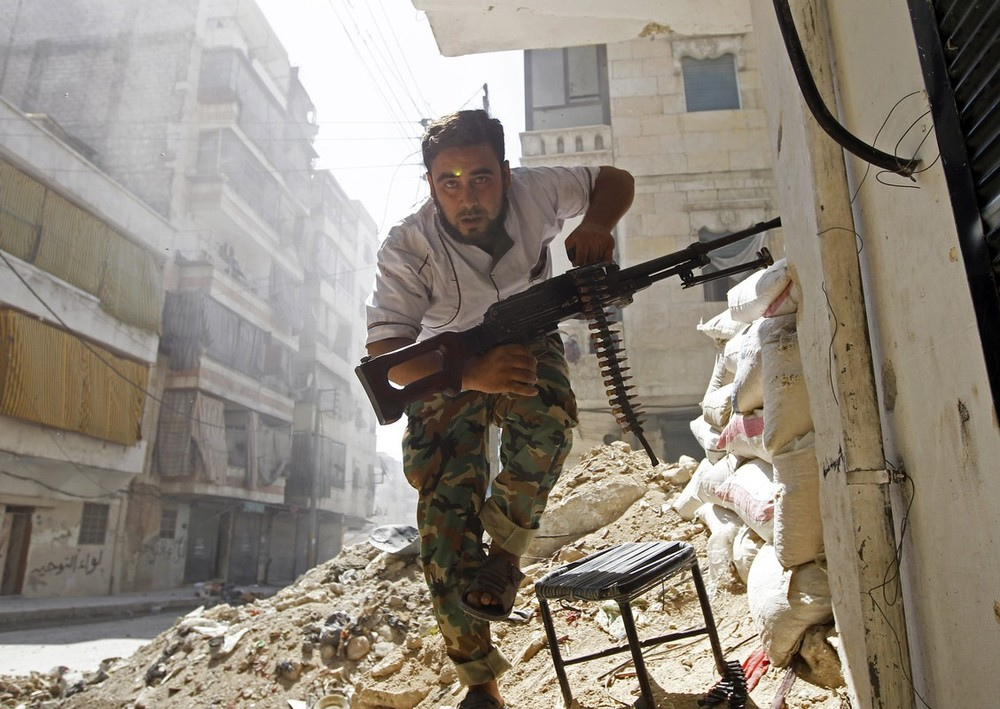 President Obama and now Trump have put America to shame for failing to live up to its moral responsibility as the global leader, by abandoning the Syrian people to a despot and his brutal allies, Russia and Iran.

President Trump’s characterization of the US attack on specific Syrian chemical storage and research facilities as “mission accomplished” is technically accurate, as the intended targets were in fact destroyed. But declaring mission accomplished in the context of the continuing unfolding tragedy being inflicted on the Syrian people is cynical and disheartening at best. Such an isolated attack does not in any way exempt the US from its moral responsibility to bring an end to a war in which the Syrian people have fallen victim to foreign powers and a deeply corrupt regime. The death and destruction sweeping Syria is incomparable to any other violent conflict since World War II, and America cannot afford to remain silent in the face of these unprecedented atrocities.

The lessons from the disastrous war of choice in Iraq and the prolongation of the war in Afghanistan should not paralyze the US, as was the case under the Obama administration. The US can no longer turn its back on the Syrian people. It must carefully consider the repercussions that America’s allies in the region will sustain should Syria be left completely to the whims of Russia, Iran, and Turkey, who met twice in Ankara and are working in unison against the US and its allies’ strategic interests in the region.

Given the regional turmoil, the US’ role is more critical now than it has ever been since the 1970s. Although Russia plays a pivotal role in Syria and its full cooperation is critical in the search for a solution, the US cannot cede Syria completely to Putin’s caprices.

The US must now develop a multi-pronged policy that would allow it to assume a more decisive role in the search for a solution to Syria’s civil war. Each component of the new policy stands alone, but together they form a comprehensive strategy that must be implemented, however problematic its individual components might be and regardless of how doubtful it is that Trump will in fact act. The risk of doing nothing could plunge the Middle East into a war that will inevitably drag the US into a fight not of its own choosing, and under the least favorable circumstances.

First, instead of withdrawing US troops from Syria, Trump must triple the number of US military personnel to achieve three distinct objectives: 1) send a clear message to Russia, Iran, Turkey, and Assad that the US is here to stay and intends to play a significant role in the search for a solution; 2) warn Assad that any further mass attacks on civilians by either conventional or chemical weapons will invite swift American retaliation against many of his military assets, including air fields, hangars, weapons depots, and air defense systems, at a time and place of its own choosing; and 3) prevent the resurgence of ISIS and restore the US’ credibility so that no party will be mistaken about the US’ seriousness.

Second, the US must warn Iran not to seek the establishment of any military bases in Syria, and enlist Russia to exert pressure on Tehran to that effect to prevent an Israeli-Iranian conflagration, which can only undermine Russia’s influence in Syria. Putin more than likely will be supportive, as he does not want to share all the spoils from the civil war in Syria with Iran and Turkey. That said, the US must warn Russia that mass murder by the Syrian government will not be tolerated and that inaction by Russia to rein in Assad will compel the US and its allies to punish Assad, which Russia wants to avoid. Moreover, the US should also make it clear to Russia that should it decide to supply Assad with the S-300 air defense system, as Russia’s Foreign Minister Sergey Lavrov suggested, it will only aggravate the situation, as Israel will not hesitate to attack such a system if it feels threatened by it.

Third, irrespective of the growing strains in relations with Turkey, the US must insist that Turkey’s President Erdogan cease any attacks against the Syrian Kurds and withdraw his forces from Syria. The US must stop Turkey from overrunning the Kurds in Syria, and warn Erdogan that fighting the YPG (the military arm of the Syrian Kurds) under the pretext of fighting the PKK will not be tolerated any longer. The Syrian Kurds have been a most loyal and reliable fighting force against ISIS, and the US has a moral obligation to protect them from Erdogan—a ruthless dictator who seeks to maintain a permanent presence in Syria. This is a part of his larger political Islamization agenda to spread Turkey’s influence throughout the region.

Fourth, the US should prevent Assad from regaining full control in Syria unless a transitional government representing all major sects in the country is established, which should be in place for at least five years. Such a government will have to initially be led by Assad, because Russia and Iran need Assad to maintain their “legitimate” presence in the country and he needs them to stay in power, two things about which the US can do little. That said, however, a new leader (who could still be an Alawite) should be elected, as long as the majority Sunni population and the Kurds are adequately represented.

Fifth, the US should now revisit the idea of establishing a no-fly zone east of the Euphrates, and another along the Syrian-Jordanian border. Such protected areas would allow many Syrian refugees to return safely. A no-fly zone enforced by the US and its allies will prevent Assad from attacking areas still held by the rebels and help wind down the daily bloodshed. The point here is that as long as Assad’s position is not threatened, he will opt to cooperate, which would also reduce Russian resistance to the establishment of a no-fly zone. It should be noted that Russia is now experiencing war fatigue and may welcome US involvement, which could also improve bilateral relations with Washington, a situation both Putin and Trump seek.

Sixth, Trump must not under any circumstances decertify the Iran deal, and instead should seek to renegotiate (with our allies Britain, France, and Germany) some of the provisions related particularly to the sunset clause and present it to Russia and China to gain their support. Otherwise, the decertification of the Iran deal, coupled with the withdrawal of American troops currently in Syria, will be a recipe for a disaster. Such moves will allow Iran to resume its nuclear weapon program, dig in its heels in Syria, and put pressure on other states in the area to pursue their own nuclear weapons program. This certainly runs contrary to American and particularly Israeli national security interests. Trump must listen to France’s President Macron to improve the current deal, and not to the fearmonger Netanyahu, who is too self-absorbed to grasp the dire regional implications of decertifying the deal.

Moreover, the decertification of the Iran deal only a few weeks before the planned summit between Trump and North Korea’s Chairman Kim Jong Un will severely undermine the US’ credibility. It would send a clear message to the North Korean leader that the US cannot be trusted and may well torpedo any prospective deal between the two sides.

Seventh, for the US to become an active and forceful player in Syria, it must show some compassion toward the Syrian refugees. Even though it is difficult for Trump to comprehend that Muslims are not inherently violent, if not outright terrorists, the US cannot relinquish its moral obligation and behave like a pariah state. Trump must admit to the US a sizeable number of Syrian refugees and restore America’s traditional humanitarian stance to provide assistance wherever and whenever it is needed.

In the wake of the horror of World War II, the phrase “Never Again” was coined to suggest that the international community will never allow any country anywhere and at any time to commit human atrocities with impunity.

President Obama and now Trump have put America to shame for failing to live up to its moral responsibility as the global leader, by abandoning the Syrian people to a despot and his brutal allies, Russia and Iran.