TransConflict Serbia, in conjunction with the Youth Dialogue Programme, held a workshop in Fruska Gora on July 25-26th, entitled ‘The Evolution of Collective Security – NATO in the 21st Century’. The event was supported by Jagello 2000 – Association for Euro-Atlantic Cooperation, the foremost Czech actor in the field of communication strategies concerning membership of the North Atlantic Alliance and security policy in general.

The workshop was opened by Ms. Mirjana Kosić, executive director of TransConflict Serbia, and Mr. Srđan Vezmar, executive director of the Youth Dialogue Programme. Ms. Kosić stressed the importance of holding such a workshop at a time when NATO itself has recently announced the launch of an intensive consultation process to devise its new Strategic Concept – which will define NATO’s strategy priorities and outlook for the next decade.

Ms. Kosić also emphasized that ‘even though Serbia declared its military neutrality, it still chose to become a part of the Partnership for Peace Programme. Active engagement in and contribution to the forthcoming debate on the new Strategic Concept is, therefore, extremely important for Serbia, should Serbia want to have a say in future deliberations and decisions…It is not the matter of choosing between military neutrality and NATO membership, but rather distinguishing Serbia’s future position and its role in collective security arena’. 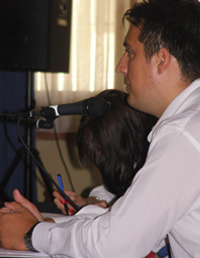 In the first session, Mr. Marko Savković, a research associate at the Centre for Civil-Military Relations in Belgrade, delivered a presentation on ‘The Concept of International Security and The Evolving Role of NATO’ (to download the presentation, please click here), in which he suggested that the defining factor in the post-Cold War evolution of NATO was the strategic decision to move beyond its traditional sphere of engagement through ‘out of area’ and ‘out of Article 5’ missions.

Dr. Dušan Janjić, president of Club 21, then proceeded to discuss from both a regional and international perspective the increasingly pertinent and fashionable issue of energy security. For Dr. Janjić, providing sufficient energy at an acceptable prices should be the main task of all governments in an increasingly inter-connected world. The re-assertion of control over Gazprom by the Russian state, combined with the growing inter-linkages between executives of the former and politicians of the latter, is key to explaining the current strength of the Kremlin and the challenges facing relations between Russia, the EU and NATO, according to Dr. Janjić. Combined with the rise of China and India, energy security has become a key issue that NATO, as a political-military organisation, has to urgently contend with. With Central Asia and the Middle East important determining elements in this regard, NATO’s future strategic concept will undoubtedly be influenced by such considerations.

In the third session, Mr. Vladimir Ninković, a project officer with TransConflict Serbia, gave the first of two communication skills-building seminars, exploring the subject of ‘Risk Perception and Assessment’ (to download the presentation, please click here). The aim of this element of the programme is to strengthen the participants’ capacity to communicate more effectively the benefits of collective security by understanding how people perceive and assess risk. 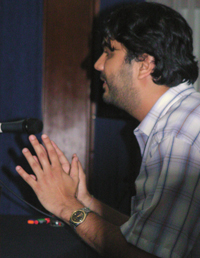 Dr. Darko Trifunović, of the Faculty of Security Studies in Belgrade, then spoke about another new security threat, terrorism. Having re-iterated the need to pursue and prosecute each individual suspected war criminal, regardless of their ethnicity, Dr. Trifunović re-asserted the need to focus greater attention upon the terrorist threat posed by Islamic fundamentalist groups, particularly in Bosnia and Herzegovina. Dr. Trifunović particularly emphasised the importance of viewing terrorism threats in a broader context of collective security, rather than reducing them to a local perspective and ascribing them to an unresolved war-time legacy.

In the final session of the day, Mr. Adel Abusara, a research associate at the Centre for Civil-Military Relations, gave a presentation on ‘The Evolving Relationship Between NATO and the EU’ (to download the presentation, please click here), in which he focused upon the development of the European Security and Defence Policy and the importance of the 2003 Berlin-plus arrangements which provide the EU access to NATO’s operational planning, capability and common assets.

On the morning of the second day, Mr. Zbynek Pavlačík, Chairman of Jagello 2000 – Association for Euro-Atlantic Cooperation from the Czech Republic, spoke about ten years of the Czech Republic’s membership of NATO, elucidating a number of comparative lessons that can benefit Serbia’s own Euro-Atlantic accession, particularly concerning the professionalisation of armed forces and the necessity of public debate on such questions of strategic importance. 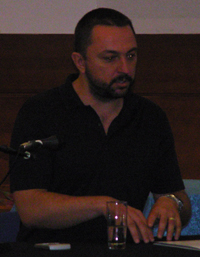 Ms. Katrin Hett, from NATO’s Public Diplomacy Department in Brussels, discussed the role played by civil society and the media in terms of communicating the benefits of NATO membership, and explained how NATO works to support a variety of actors from throughout the region through the co-sponsorship of projects, provision of information services (including visits for journalists to NATO HQ) and growing use of new media.

Ms. Hett pointed out that the challenges of communicating NATO membership do not only exist in Serbia, but even affect member states such as Germany, where a left-wing party is currently running on a platform that seeks the abolition of NATO. With respect to clarifying the benefits of joining NATO, Ms. Hett emphasised factors including the professionalisation of the armed forces in general and reduced armaments stockpiles, combined with the positive impact of membership on both credit ratings and the process of EU accession. Ms. Hett reminded the participants that there was no net cost for joining NATO membership, whilst questions about spending obligations ignore the fact that Iceland has no armed forces yet is still a member of NATO. Indeed, cost savings could be expected thanks to defence reforms, whilst most new members were in fact net beneficiaries due to NATO’s programme to reintegrate ex-army officers back into civilian life. Ms. Hett added that NATO wanted Serbia as a member because of the expertise of its armed forces, including the quality of its soldiers and training of its officers, plus their significant experience. 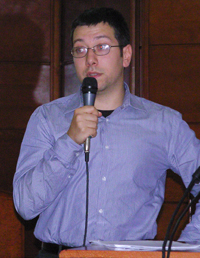 In the final session, Mr. Vladimir Ninković gave a second presentation, entitled ‘Risk Communication’ (to download the presentation, please click here), including a case study on the construction of a power transformer station in Mirijevo, which underscored the importance of getting to know who the key stakeholders are, deciding which forms of consultation to use, and actively engaging and involving the identified stakeholders throughout the process of communicating risk.

In their closing remarks, Ms. Mirjana Kosić and Mr. Srđan Vezmar both thanked the speakers and participants for their excellent contributions, along with Mr. Pavlačík and Jagello 2000 for their kind support. Ms. Kosic reiterated the intention of TransConflict Serbia and the Youth Dialogue Programme to hold a number of complementary workshops throughout the autumn, exploring a variety of themes, such as the Partnership for Peace (PfP) program, regional experiences of NATO accession and operations, security sector reform and NATO’s relations with Russia and the EU.

For a selection of photographs from the workshop, please click here.