Community insecurity, whether real or perceived, is a major source of tension and mistrust between various ethnic groups throughout the Western Balkans. Fears of crime, violence, intimidation, disorder or anti-social behaviour serve to antagonise intra- and inter-ethnic relations by undermining and damaging the very fabric of social life. Police and other security providers are, however, often under-resourced and cannot respond effectively, whilst local citizens feel powerless with respect to their security concerns. Effectively addressing the issue of security, therefore, requires a partnership-driven approach between those local communities afflicted by insecurity and those responsible for providing public security.

By encouraging members of the local community to work together to identify, discuss and develop solutions to their security concerns through a series of practical, affordable and realistic initiatives, TransConflict aims to enhance the capacity of local communities, civil society organizations (CSOs) and municipal governments throughout the Western Balkans to work in partnerships to provide effective security to their constituencies. as well as to help communities better understand their own security problems and to both co-operate and communicate closely with the relevant institutions, including municipal governments and policing structures, in order to address them. 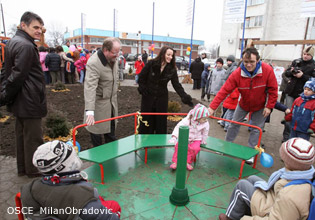 In doing so, TransConflict aims to stimulate civic activism, volunteerism and public communication at the local level by stimulating community-led initiatives. TransConflict also aims to promote the involvement of local businesses in supporting regeneration activities, either through direct financial and/or technical assistance. By improving co-operation and communication between local communities, municipal governments and policing structures, TransConflict’s approach will benefit the overall security situation throughout the Western Balkans. It is also hoped that the community security initiatives stimulated by TransConflict’s assistance will prompt other neighbouring municipalities and communities to undertake similar activities, whilst complementing efforts to promote community-based policing and the notion of municipal safety more broadly.