Despite its undoubted potential, Albania’s fledgling oil industry is being constrained by a lack of domestic capital and political paralysis that is deterring foreign investors and inhibiting growth.

Albania – one of Europe’s poorest economies – has seen an unprecedented rise in its oil sector in recent years. Experts say there might be at least 10b barrels of crude oil, which would make Albania equal to Norway or Sudan in terms of estimated oil reserves. As a result, foreign companies are flooding the market in the hope of being one of the first actors to grab a seat at the oil table. However, the shiny future might be more ambiguous than it first seems. Whilst a lack of domestic capital leads to a reliance on foreign investors, Albania’s persistent political stalemate is eroding the very stability essential to attracting foreign investment.

In 2004, a Canadian company exploited only 600 barrels of crude oil per day from Europe’s largest onshore oil field, the Patos-Marinza in Southern Albania. Seven years later, daily production jumped to more than 13,000; a huge increase in a relatively short period of time. Oil reserve estimates are also increasing according to company data – the shareholders of Bankers could rub their hands, most likely they have found the investment of this decade in Albania. This rise is not without any antecendents.

The petroleum industry is one of the oldest industries in Albania; as early as Roman times, bitumen was mined in these territories. Modern day oil exploration began as early as 1918, with production starting in 1929. Crude oil was actually one of the main reasons why Mussolini decided to invade Albania. After World War II, the Soviet Union established dominant positions in the petroleum industry but following the Albanian regime’s split with the USSR, the People’s Republic of China (PRC) became the main actor in this sector, providing financial and technical assistance to the country. Oil production peaked in 1974, with 2.2m tons that year.

However, after Albania broke off diplomatic relations with the PRC, production started to steadily decline and by 1994 only 1,400 tons of crude oil was exploited per day – a decline which could be attributed to a lack of resources and problems with workforce due to the social and economic hardships in the country. The end of the nineties also brought social, political and economic tensions which led many of the major international investors in the oil and natural gas sector to leave the country.

Compared with these events, the early part of this decade has seen a sharp increase in investments in the oil and gas sector. The social and political situation in the region – after NATO’s campaign against Serbia in 1999 – seemed to be improving, and the economic environment also proved favourable. Several foreign companies – such as the previously mentioned Bankers Petroleum plus MedOil, Stream Oil & Gas, Sky Petroleum, San Leon Energy and Petromanas – have acquired both onshore and offshore exploration licences, and some of them already operate several fields and exploit crude oil in increasing quantities. Bankers occupies the leading position – it is the sole operator of the largest onshore oil field in Europe and is aiming to increase production to 20,000 barrels per day in this area in the following years. 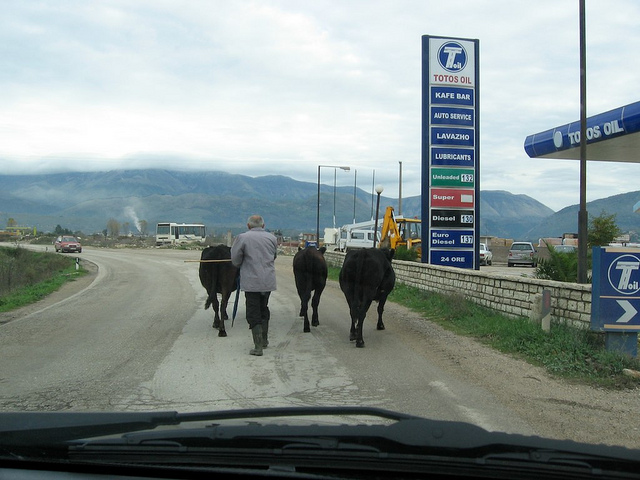 copyright (c) 2011 amhuxham and made available under a Attribution-Noncommercial-Share Alike 2.0 license

There is much to do to increase oil production – the record levels of the seventies have still not been realised, oil production has surpassed 0.5m tons in 2006 and 1m in 2010. This is just a drop in the bucket; Austria or Croatia produce the same amount of crude oil each year and Albania is still reliant on oil imports to suffice its domestic needs. However, estimated oil reserves are the most important factor. As more and more – mainly foreign – investors start explorations throughout the country and reactivation, redevelopment programs are drawn up in order to increase production, the amount of oil exploited could significantly increase in the next couple of years and estimated reserves could also start to grow.

Currently, according to various company data, at least 10b barrels of oil could be lying under Albanian soil. This number puts Albania into an important position on the world’s oil map. Nonetheless, these data should be handled carefully because oil production companies are interested in pumping up these amounts to increase profits and fuel shareholders’ interest.

The export markets could also open up for oil companies operating in Albania. The country currently exports oil only through the new oil and gas terminal in Vlore, and only to Italy. The export of energy products is clearly increasing – according to data provided by the Bank of Albania, there was a sharp 30% increase this year. In the January-September period, €215m worth of energy products were exported, with crude oil accounting for the majority.

The proximity of Italy – the port of Bari lies only 140 kilometres from the Albanian coastline – is obviously an attractive factor for foreign investors. Less money is spent on transportation and at a cheaper price – customers currently pay only 60-65% of the Brent Crude price for Albanian oil. Due to the oil terminal’s recent existence, there is hardly any data to be found on trends of oil shipments but  expectations are high. With the opening up of this route, regular and frequent transport of oil is foreseeable. Another step in this line would be to add several other export destinations, such as Greece. The export terminal is located at the entrance of the Adriatic Sea which is a geographically easily accessible location – both from the Western and Eastern Mediterranean.

The export side is the bottleneck of increasing oil production. Despite the opening of the Vlore terminal, other export infrastructure is needed to transport crude oil to EU member states – which are the primary destination countries of Albanian energy. However, the level of Albanian production is not sufficient enough to provide a financially rewarding pipeline option to transport the oil into EU member states. Natural markets – i.e. close destinations – could be Italy and Greece, however, the construction of completely new pipelines seem unprofitable at present. It is cheaper and easier to wait for sufficient crude oil to fill a tanker for shipment to Italy than to pump oil into a pipeline which would be used only at a low percentage of its capacity. Bankers Petroleum is currently constructing a 40km long pipeline to the Vlore terminal to make oil transport easier and cheaper; a development would also speed up oil exports to Italy, for example. 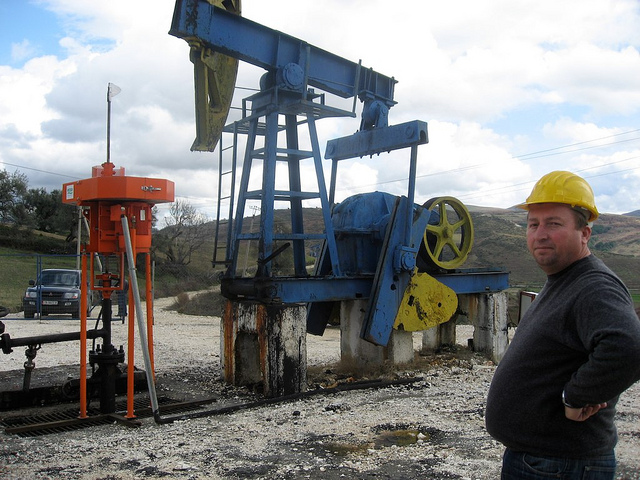 copyright (c) 2011 amhuxham and made available under a Attribution-Noncommercial-Share Alike 2.0 license

Other countries in the region – like Serbia, Bosnia-Herzegovina, the Former Yugoslav Republic of Macedonia (FYROM) or Bulgaria – receive their oil and natural gas from Russia through pipelines running via Ukraine and Hungary. Croatia, meanwhile, is building its own LNG terminal, whilst smaller countries (Montenegro and Kosovo) are tiny markets for such a large pipeline project. Only regional initiatives could provide adequate options for the financially profitable mass-scale export of Albanian oil through pipelines.

At present, only one such plan – the AMBO pipeline – exists. This proposed pipeline would bring Russian and Caspian oil, bypassing the Turkish straits with an entry point in Bulgaria, running through FYROM and ending in Albania, where all the oil would then be shipped to Western Europe. Nevertheless, this pipeline is designed to be a transit pipeline; no intake is planned. Albanian oil could not, therefore, find its way through here.

Cooperation of Western Balkan countries in this field could be another option, however, the different interests and historical energy system inflexibilities – such as the presence of Russian pipelines – make increased cooperation on common grounds almost impossible.

Today, the only profitable option for the export of Albanian oil on a short and medium-term seems to be the transport of this product via tankers through the Adriatic Sea to Italy. Besides this, we can expect that the capacity of the terminal and the destinations where this oil will be shipped would increase as the levels of production rise in the coming years.

The rise of the Albanian oil industry affects the Albanian economy as a whole. As mentioned previously, the export of energy products has risen by 30% in the first three quarters of this year compared to the same period in 2010. Crude oil was the driving element in this regard. Albania still experiences power outages due to its outdated electricity infrastructure and dependence on hydroelectric power. However, in spite of this, economic growth averaged 5% between 2004 and 2009, before slowing slightly to 3.5% in 2010.

Several major international institutions, such as the World Bank and the European Bank for Reconstruction and Development (EBRD), have also invested in the energy and oil sector, with EBRD financing Bankers Petroleum’s Patos-Marinza development projects with €64m. Another big investment was the construction of the Vlore terminal – worth €60m and capable of serving tankers up to 190 metres long – by an Italian company.

The oil sector, including retail and wholesale, is driving FDI – the electricity and gas sectors only received some €6m in 2006-2008 – and has the potential for rapid growth in the coming years. A 2010 United Nations Development Programme (UNDP) report on Albania has highlighted how energy supply infrastructure is an area where rapid developments are taking place. The pro-business government, favourable regulation, low corporate taxes, exemption of most businesses from VAT are all attractive points for foreign investors. Such steps have achieved positive outcomes. Despite the global economic downturn, more than $1b of FDI arrived to Albania in 2010; making it second in the region, just behind Serbia.

The Albanian state also benefits from the rise of the oil industry, receiving 10-12% of oil revenues from production companies. According to an Extractive Industries Transparency Initiative (EITI) report, government revenues from the oil and natural gas sectors – including the national oil company, Albpetrol – amounted to $31m in 2009.

Albanian politicians are keen to highlight these achievements. Albania’s prime minister, Sali Berisha, is the first to promote his government’s business friendly behaviour and frequently participates at inauguration ceremonies, like that at the Vlore terminal in 2009. Whilst foreign companies value government support, the political stalemate which has been engulfing Albania since the 2009 parliamentary elections and the riots in 2011 are a hurdle in establishing a stable political environment. Opposition socialists accuse the governing party of manipulating the results of the last elections and have boycotted parliament since then; further casting shadows over Albania’s EU integration process.

Albania – which currently imports great amounts of its energy needs from abroad – is slowly becoming an energy exporter. Improved utilisation and further development of these elements is key to its future growth. However, with a lack of domestic capital and the Albanian government unable to provide any considerable amount of financial resources, future developments will be driven by foreign companies. The focus on developing oil infrastructure – terminals, storage facilities, pipelines etc. – continues to grow, whilst further explorations, including offshore, could provide hitherto unknown reserves.

The amount of oil exported from Albania is still relatively small compared to that of other countries. However, stable delivery, the proximity of production to major Western European markets, competitive prices, increasing levels of production and the constantly developing infrastructure and production facilities could make Albania an excellent partner; particular when compared with other regions and countries – such as the Arab states, Iran, Nigeria – where sudden and unexpected political changes can considerably affect long-term oil deliveries. Whether Albania can overcoming some of these growth barriers will have a key bearing on the country’s future wealth and prosperity.

Gergely Nagy is a graduate of Charles University in Prague, where he completed the international economic and political studies Master’s program. Gergely has been a research assistant at various Hungarian and Czech think tanks and institutes, and is currently the deputy editor-in-chief of the news desk of Balkan Press Agency and a freelance journalist for Transitions Online.