Given the on-going political crisis over hydro-carbon exploitation rights, plus a pending July 2012 deadline by which Greek Cypriots will assume the rotating EU Presidency, the failure of UN-mandated talks over reunification seems inevitable.

Reunification efforts in Cyprus have been going on ever since the division of the island in 1974, when Turkish troops intervened and gained control of 37% of the territory in the north, in response to a coup attempt organized by the then-ruling colonels’ junta in Greece that supported – ‘Enosis’ – the union with Cyprus. Summits in 1977 and 1979, respectively, between the Turkish and Greek Cypriots focused on the possibility of forming a new partnership based on two separate zones, but with no results.  The Turkish Republic of Northern Cyprus (TRNC) was proclaimed in 1983, yet has so far only been recognized by Turkey, which currently maintains 35,000 troops in the north. Southern Cyprus – using the official name of the Republic of Cyprus (RoC) – has controversially become a full member of the European Union (EU) in 2004, despite its clear refusal of the Annan Plan in the referendum for unification. The Turkish Cypriot community has been disillusioned with the failure of the Annan Plan, and strives to maintain its economic stability through Turkey’s financial and development assistance.

The latest round of the UN-mandated talks was initiated in September 2008 between the former Turkish Cypriot president, Mehmet Ali Talat, and the Greek Cypriot president, Dimitris Christofias. The talks aim to create a federation based on two societies, two regions and political equality. After his election as the TRNC president in April 2010, Dervis Eroglu took over the negotiations. Six outstanding issues dominate the UN-mandated talks – governance and power-sharing, economy, EU matters, property, territorial adjustments, security and guarantees.

The first three issues have already been discussed in depth. The issue of Property lies at the center of the present talks. Territorial adjustments, and security and guarantees, will need to be settled separately through an international conference as it involves the Guarantor States of the 1959-60 London and Zurich Agreements that set up the old Republic of Cyprus – Greece, Turkey and the UK.

The looming deadline for the negotiations is July 2012, when the Greek Cypriot government will take over the rotating EU presidency for six months. If the negotiations do not yield any substantive results by then, the prospects for reunification will be dim. Turkey has already announced that it will freeze its relations with the EU during the Greek Cypriot presidency. 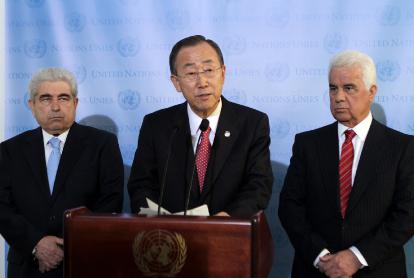 A breakthrough in Cyprus is still important for Turkey, as the divided island has become the main obstacle in its efforts to secure EU membership. Turkey’s EU accession process has been painfully slow. Of the 35 chapters, Turkey has opened only 13 since talks began in the autumn of 2005 due to Greek Cypriot veto. The EU progress report published in October 2011 calls Turkey to meet its customs union obligations with the EU and implement the Additional Protocol by opening its seaports and airports to Greek Cypriot traffic.

Turkey, on the other hand, accuses the EU for not keeping its 2004 promise of allowing direct trade with North Cyprus, after the failure of the Annan Plan. The draft EU regulation that would allow the north to trade directly with the EU was rejected by political groups in the European Parliament in June 2010, due to opposition from the centre-right EPP group.

In late summer of 2011, the Greek Cypriot leadership declared that it will start implementing the “agreement on the delimitations of the exclusive economic zone” it signed with Israel in 2010 on the exploration of hydro-carbon resources in the south of the island (1). The agreement sets the nautical boundaries and the respective rights to search natural resources by a median line. According to the plan, Texas-based Noble Energy and Israel’s Delek Group have joint access to hydro-carbon reserves, along with the Greek Cypriot and Israeli governments (2).

In Mid-September 2011, Noble Energy started exploratory drilling activities. The Turkish government responded by describing the act as an attempt to sabotage the on-going UN talks, and by arguing that any Cypriot natural resource has to be shared by both communities on the island. Turkey further retaliated by signing a continental shelf delimitation agreement with North Cyprus at the end of September. Ankara also declared its intentions to set up its own 200 nautical mile exclusive economic zones that reach far into the waters delimitated by Cyprus and Israel.

After a brief seismic seabed study carried out by the Turkish Petroleum Corporation (TPAO) under a license granted by the Northern Cypriot government, Turkey is set to start its own offshore gas drilling activities around Famagusta by February 2012. The Turkish navy has sent gunboats to assist its gas exploration vessels as a show of force in the Eastern Mediterranean, further escalating the tensions.

Right before New Year’s Eve, the Greek Cypriot government announced that Noble Energy’s exploratory drills 115 miles south of the island discovered an estimated 5-8 trillion cubic feet (tcf) of hydro-carbon resources, worth $60 billion. The Greek Cypriot government optimistically expects to reap the benefits from the sale of licenses from the hydro-carbon field. International energy markets, however, are wary of high political risks, and the extraction and delivery of the natural gas to European markets will not take place very soon. It will not be surprising to see gestures of reconciliation from the Greek Cypriot government toward Ankara. Turkey sits at a critical junction on energy corridors between European markets and the Eastern Mediterranean.

The Future of the UN talks

Although the recent energy crisis between the Greek Cypriots and Turkey has escalated tensions in Eastern Mediterranean, it is highly unlikely that it will have an impact on the UN talks. Turkish and Greek Cypriot negotiators will not quit, since the first quitter will have to pay a very high political price; unless the United Nations calls the talks useless and ends the drama by itself.

In reality, the prospects of successful negotiations are dimmer than ever. The sluggish economic growth of the Greek Cypriot economy (0.2% GDP growth forecast for 2012) and the banking sector’s visible vulnerability to Greek sovereign debt, prompted a chain of credit-rating downgrades by international rating agencies in 2011. The Christofias government is unenthusiastic about refinancing the South’s maturing debt on international markets, as a recent surge of the yields on Greek Cypriot bonds on secondary markets indicates that international investors consider withdrawing from Greek Cypriot capital markets.

In late December 2011, the Greek Cypriots secured a $ 2.5b loan from the Russian government for 4.5 years; a much-needed cash flow injection that will avert the bail-out option in the short term. A possible unification with the North will dramatically burden the faltering Greek Cypriot economy, as a significant portion of the EU funds would have to be relocated to North to strengthen the infrastructure of the Turkish Cypriot economy.

Turkish Cypriots, on the other hand, are not as eager for a settlement as they were in 2004. According to a poll conducted by the Cyprus 2015 initiative in March and April of 2011, 77% of Turkish Cypriots do not trust the Greek Cypriot government’s sincerity in negotiations. If the UN mandated talks fail once again, a growing number of Turkish Cypriots suggest that they would like to see the North go its own way and seek recognition in the international arena.

Similarly, Greek Cypriot public opinion is still strongly in favour of a “no” vote in a possible reunification referendum. Greece is not in a position to put any political pressure on the Greek Cypriots as it goes through the worst economic and political crisis in decades, and will therefore continue to provide unconditional support to the Greek Cypriots.

Given such a bleak political and economic outlook, it is not possible to make a lot of positive predictions for Cyprus in 2012. Unless the Cypriots agree on a workable plan under the UN-mandated talks by mid-2012, relations between the EU and Turkey will be frozen for the following six months. The failure of the UN talks will have a negative impact on further reunification efforts, since the Turkish Cypriots and Turkey are expected to push for international recognition of the TRNC. Frozen relations between EU and Turkey will also derail any diplomatic collaboration between the two in the Western Balkans and the Middle East, Syria and Iraq, in particular. Turkey will continue to veto the use of NATO assets for EU security frameworks, as Turkey’s EU membership perspective will continue to diminish.  2012 will be a tough year. All parties need to think outside their immediate interests; but there is no incentive for innovative thinking at present.

Doga Ulas Eralp is a scholar of international conflict, development and democratization. He is the author of a numerous articles and book chapters on the Western Balkans, Cyprus, the European Union and Turkey. He also works extensively as a practitioner consulting international organizations and think tanks. He lives in Washington, DC.

1) Republic of Cyprus is a signatory to the U.N. Convention on the Law of the Sea and has signed an Exclusive Economic Zone agreement (EEZ). In the past decade Greek Cypriot leadership signed joint oil and natural gas exploratory drill agreements with Egypt in 2003, with Lebanon, Syria and Israel in 2007.

2) Noble Energy which is carrying out the drilling operations for Cyprus has been conducting offshore drills in the eastern Mediterranean for Israel since 1998.