Over a decade on from the Good Friday Agreement, Belfast is yet to tackle the interfaces and contested spaces of the north of the city, or indeed to look to remove the walls that have for so long shaped the daily lives of the people living there; real peace does not need to be sustained or “secured” by walls.

There is an adage that good walls make good neighbours and while in Belfast we have no shortage of walls, the creation of good neighbourliness has not presented itself as a subsequent dividend. It is hard to digest the description of dividing walls as peace-lines; division, segregation and estrangement are surely not conducive to peace. Interface walls, Peacelines, Security Cordons or The Divide – whatever the title used – the image of these walls is synonymous with the world’s vision of Belfast.

There is often reference made to the scars and the legacy of the conflict, and the miles of corrugated steel and concrete are perhaps the most visible residue of the past. The Good Friday Agreement is over a decade old and we have seen a period of relative peace – along with the associated dividend of regeneration and economic development – come to the centre of the city and the suburbs. This new sense of urgency to build, shape and change the image of Belfast, however, is yet to find its way to tackling the interfaces and contested spaces of the north of the city, or indeed to look to remove the walls that so long have shaped the daily lives of the people living there. 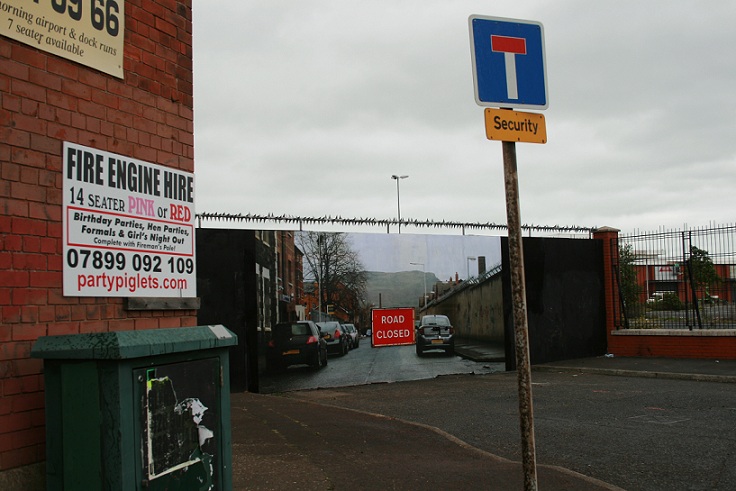 Walls themselves are neutral, inanimate structures; they hold no politics, intent or opinion. The use of a wall to separate, to divide, to partition and to control, however, is laden with the politics of its architect. Through history the role of the wall has changed from that of protection, keeping out the roaming horde, to signifying dominance – the Norman castle declaring military and technological superiority to the landscape – and the present incarnation of the wall as a tool of the state to divide, police and control.

In 1940 the Nazis constructed walls to confine half a million Jews to the Warsaw Ghetto; a clear demonstration of the power of the wall as a tool of terror and control. 1961 saw the beginning of the construction of the Berlin Wall, whose presence loomed across a divided Germany for 28 years until it came down with the fall of communism in 1989. Nicosia, the capital of Cyprus, has been divided by a wall from 1974 along the so called Green Line, negotiated as part of the 1974 truce. Israel has since 2005 imposed a wall along the West Bank – allegedly as a security measure – with three gates open for only twenty minutes each day, but which also annexes much of the Palestinians’ most fertile and irrigated land. Meanwhile, the recommendations of the Independent Commission on the Security Forces of Iraq, appointed by the U.S Congress, stated that the best resolution to the conflict in Baghdad is to construct Belfast style peace-lines. One of the authors of this report to Congress is Duncan McCausland, assistant chief constable to Belfast, who has advocated the use of walls, such as we know from the Beginning of the seventies, as an effective way to police the situation in Baghdad, stating that walls bring “security first, then we can normalise, then we can build.”

In over a decade since the GFA, no plan has been put forward by government to address the interface walls or the associated sectarianism they foster. Instead of peace underpinning the redundancy of the walls, it has simply allowed new ones to appear. New barriers have, for instance, been erected in the Whitewell. While the violence across the interfaces is no longer communal, the sectarianism present in 14 and 15 year old youths engaged in rioting at interfaces belies the fact that they were born after the conflict. The effective solution to the removal of the walls lies within the communities that are still kept apart from each other by their presence. The fact that in North Belfast the walls are not one seamless unbroken line makes ludicrous their reason for existence. If they are there to keep the inevitable from happening – Protestants and Catholics locked in an endless cycle of conflict and killing every time they come in contact – then why are there breaks, gaps, hinterlands and swathes of roads and streets where the communities, while still living apart, are not divided by walls or fences? The North Belfast Interface Network – in its response to The Stormont Assembly consultation document called “Building a Better Future – Draft Budget and Programme for Government 2008-2011 and Draft Investment Strategy 2008-2018” – has stated that, “to underpin the commitment to building good relations and tackling intolerance Government should commit itself to reducing the number of interfaces by 30% by 2012; by 50% by 2015 and to be eradicated by 2020”.

If North Belfast is to share in the concept of the peace dividend then it must begin with a commitment by government to begin to seriously address the eventual eradication of interface walls. It would be naïve to think that this is something we can see beginning tomorrow. For people living on or at interfaces, the walls have assimilated a role and created a need for their presence, but the dialogue and the will to remove them must begin now. Over ten years of peace, and over 15 years from the end of the armed conflict, there must surely be more to offer than existing in a state of benign apartheid. Real peace does not need to be sustained or “secured” by walls.

Breandán Clarke is an interface/community relations worker with the North Belfast Interface Network.