Conflict transformation in Kenya is confronted by a number of challenges – including limited dialogue and communication within and between communities, plus a lack of effective models addressing the underlying drivers of conflict.

Click here to personally endorse the Principles of Conflict Transformation!

There are a number of sources of conflict in Kenya, including, but not limited to: 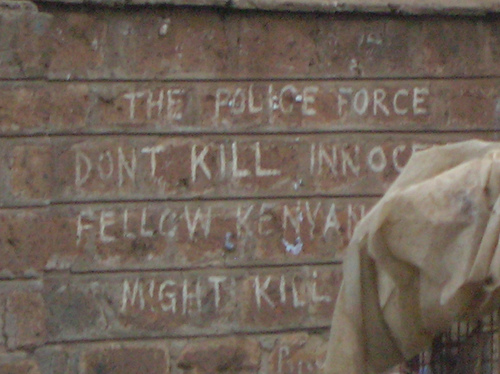 This graffiti, found throughout the slum of Kibera, was put up during the post election violence in 2008. The artist, who calls himself solo7, while others were killing, looting, and rioting, risked his life to write these messages of peace. (Photograph by the Advocacy Project, published under a Creative Commons license).

Conflict transconflict in Kenya is confronted with a number of challenges, including:

Kisuke Ndiku is the executive director of Active Non-Violence Initiatives Kenya, a member of the Global Coalition for Conflict Transformation.