Using the theatre and theatrical techniques as a mean for creating a safe space for young participants from societies involved in the Nagorno-Karabakh conflict helped breakdown existing stereotypical perceptions of history.

Collective memory gives people a sense of belonging. History helps to explain the world. A shared view of history can motivate people to take action that changes the future. These were the main massages that the organizers intended to pass to the participants of the History-Theatre workshop, held in Tbilisi from 17-24 of November, 2013.

The workshop was the last joint activity in the framework of Peace Dialogue’s three-year project, Let’s See… Let’s Choose… Let’s Change. This year the project’s activities were mainly focused at developing a critical historical consciousness and understanding among the youth involved in the project that people themselves are actors in history and play the most active role in constructing collective historical memories. 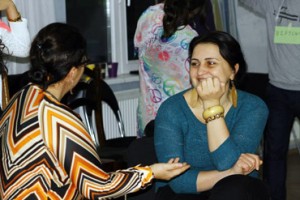 The History-Theatre methodology that was used during the workshop was developed by the implementing team, based upon Augusto Boal’s Theatre of the Oppressed, Paulo Freire’s pedagogical concepts and the team’s experience working with the historical insights of representatives of conflict-affected societies.

Using the theatre and theatrical techniques as a mean for creating a safe space for young participants from societies involved in the Nagorno-Karabakh conflict, the trainer, Harald Hahn, and the project’s German coordinator, Marina Grasse, tried to help the participants to see and recognize their own role in the history creation processes. Indeed addition, the organizers intended to break the existing stereotypical perceptions of history consisting solely of narratives of heroism and stories of a nations’ victimhood. 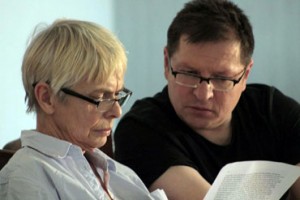 “History is subjective. It’s open to different interpretations. Each country and every generation has to deal with their own past, but this should not be done by promoting myths or by using politically motivated interpretations of history to attack opponents,” stated Marina Grasse during one of the discussions held in framework of the workshop.

“I never thought about the power of the history”, says one of the participants, Kara. “I realized now that having a concrete aim or a political agenda, through the compilation and presenting the same facts in specific order, one can make societies greatest friends or the worst enemies ever.”

Peace Dialogue are a member of the Global Coalition for Conflict Transformation from Armenia. Further information about this project is available by clicking here.