TransConflict is pleased to present an interview by Conciliation Resources with Vitality Plus (Vitalité Plus), a humanitarian and development NGO based in Bangui, Central African Republic (CAR).

Vitality Plus (Vitalité Plus) is a humanitarian and development NGO based in Bangui, Central African Republic (CAR). Conciliation Resources spoke to three members (Florent Sanuni, Protection Programme Manager, Lolita Christiane, Administrative and Financial Coordinator, Irenée Ngugui, Protection Programme Facilitator) about how the NGO is contributing to peace in the region.

The Vitality Plus headquarters is discretely tucked away behind tall rusting sheets of corrugated iron in the 4th arrondissement, or district, of Bangui, the capital of CAR. Its bright blue roof peeping just above the top. The 4th arrondissment is one of the most trouble-prone prefectures in the city (the 4th and 7th arrondissements were the main centres of violence when the Seleka group attacked Bangui) but I feel safe as I’m met by the curious gazes and shy smiles of NGO staff taking a siesta in the front yard, its terracotta orange soil scattered with piles of wood beams. 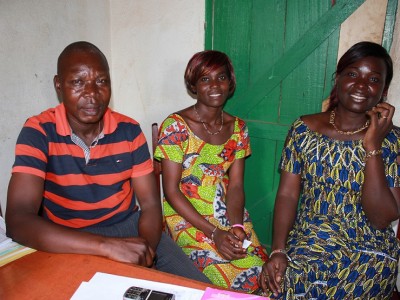 It is a rundown but still pretty looking building with a mottled candy pink exterior and parrot green slat doors. Two workers are busy tinkering away at the front wheel of one of the organisation’s modest field vans with Vitalité Plus logo handpainted across its side. I’m led into the cool airiness of the main administrative office where Lolita Christiane organises the day-to-day running of the NGO. I am almost tempted to ask to re-start the cantankerous old fan as the heat starts to stifle before I even ask my first question.

“Vitalité Plus is a national institution!’ proclaims Florent Sanuni, Protection Programme Manager of Vitality Plus, “It has bases in various CAR préfectures.” Sanuni lives in the 4th arrondissement, he is single and has 9 children. He is in charge of the protection programme and adds proudly that he has a sociology degree. Education in CAR follows the French system, and despite being available to all is handicapped by insufficient funding. 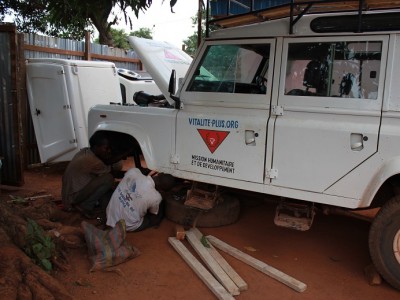 Sanuni goes on to explain how their colleagues at these bases carry out field activities with ‘peer educators’ through the local peace committees, which Vitality Plus set up with the support of Conciliation Resources. Vitality Plus operates at the central level to supervise these activities.

I ask how the local peace committees are helping to reduce intercommunal violence in their community. Sanuni replies, “As their names suggest, their role is to raise awareness amongst people in order to avoid violence, especially violence against women and girls, but also intercommunal violence. So this is the role of these peace and dialogue committees that we have set up. As well as peace and dialogue committees, there are also peer educators who carry out awareness-raising actions in the neighbourhoods where there are vulnerable groups, within the population, so they become aware of violence issues.” 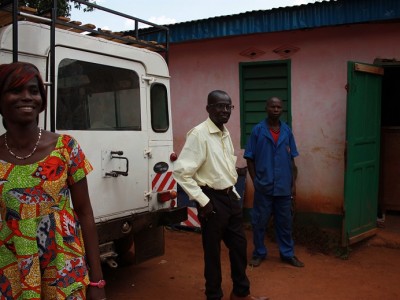 He describes large-scale examples including a one-week training workshop in peace and social cohesion in Kakabando in July earlier this year where they trained the members of the peace and dialogue committee. There was also a one-day social cohesion workshop, which both Muslim and Christian communities attended: “They played football matches, female and male, they took part in races, sketches, dances. The Muslims also came to the sports ground, and even the local authorities were there. We were really pleased about that.” 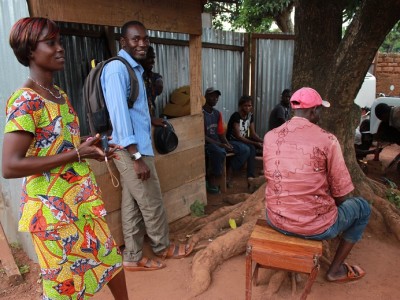 “And the results speak for themselves,” says Sanuni. “If you look at the situation now in neighbourhoods, in the sous-préfectures, in the préfectures, there were renewed tensions but there’s been a drop in violence, which means these committees work effectively. We are happy with the results.”

When asked if they get many women participating in the peace committees, all three answer
unanimously with a resounding yes, claiming mixed groups in attendance. The role of female peacebuilders is taken very seriously in the community. In politics, the civil service, the military, and the police force, women are well represented despite being less educated. However, women are less likely to attend, much less finish, primary school so this is a remarkable achievement in itself. 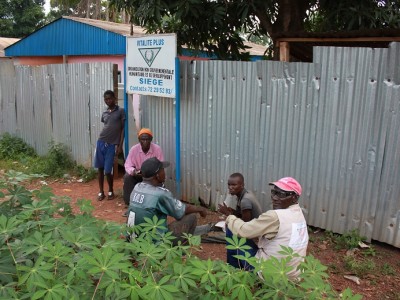 Irenée Ngugui, protection facilitator at the NGO, resides in Benzi neighbourhood. She is single and holds a sociology diploma. Ngugui is no longer afraid of engaging with Muslims and going to certain neighbourhoods where Muslims live, “Thanks to these activities we’ve been carrying out around dialogue and peace, I’ve been able to understand that we are all humans. There is no point in killing each other and in being scared. Now I feel confident to go for walks in areas where Muslims live, to talk and chat with them. This has been the change in my personal life.”

Lolita Christiane says how in the past, as a woman she felt helpless. She hesitates on how to refer to the conflict and settles on the word crisis. “In the past I felt frustrated by the crisis. But now, after working in the field, talking to people, I feel that things are a little better.”

On the issue of women’s roles in peacebuilding, Sanuni adds, “When we work in the field, when we meet other women, we can talk to them about peace. And then they bring peace to the country, starting with their own families.”

Heartening words from locals who were at the epicentre of the 2013 crisis but whose postponed lives are slowly but surely reverting to the everyday ordinary that we take for granted.

Before, it was not easy to go and have a conversation with a collaborator,” concludes Sanuni. “Now you can even leave Bangui to go to the provinces and talk with somebody, it’s not a problem … There’s been an improvement, thanks to the various activities on social cohesion. I can now freely go and talk to people anywhere and I am pleased about that.”

Tamanna Kalhar is media and communications officer at Conciliation Resources