On the eve of the eighth anniversary of war’s end in Sri Lanka, we publish below a letter from mothers of the disappeared of Kilinochchi who continue to seek answers as to the whereabouts of their loved ones. Full versions of the respective letters to Secretary-General António Guterres and Prime Minister Theresa May, can be found here and here. 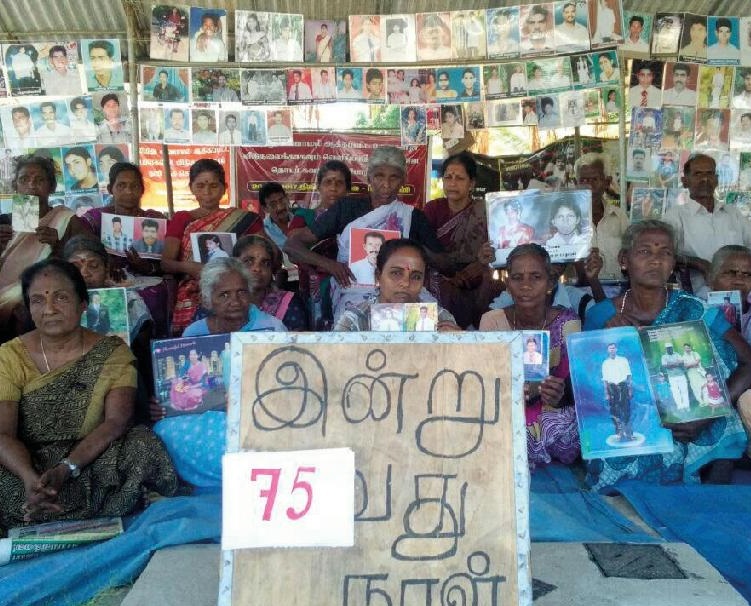 Your Excellency António Guterres, The Rt Hon Theresa May,

We mothers belong to the Association for the Relatives of the Enforced Disappeared in the District of Kilinochchi in northern Sri Lanka. For three long months we have been continuously staging protests by the roadside to draw the world’s attention to our agonizing plight. We just want to know what happened to our beloved sons and daughters, our husbands and wives and our grandchildren who have disappeared. After eight years we need the truth but the Government of Sri Lanka, which claims to believe in transitional justice, has ignored us, trampled on our feelings and shown us nothing but disrespect. Basic human dignity means we should be heard.

In our small district alone there are at least 1,200 people who disappeared at the end of the civil war in 2009. This figure includes those who surrendered to the army and those who were identified as suspects while in custody and taken away. Some were abducted before and after the end of the war; others surrendered in an orderly fashion under the protection of a Catholic priest on the last day of the war, but the priest, Father Francis Joseph, and the people with him have all disappeared without trace, including several young children from our families.

We started this protest to hold the Sri Lankan Government accountable for its actions in the final phase of the civil war in 2008-9.

Also we wanted to know the names of all those held in secret torture camps. Some of us have compelling evidence to prove  that our children have been kept in secret camps by the Sri Lankan armed forces.

Specifically we ask your help in securing from the Sri Lankan Government the release of the names of:

(a) all those who are still in their custody today and

(b) all those who were in their custody.

Although more than 80 days have already passed since we began our protest, no one from the Government has visited us or shown any interest in knowing our demands.

Our members are already badly affected physically and psychologically by the disappearance of their loved ones, and are becoming weaker and weaker. No one from the iNGOs, or the Government or the International Community has responded to our plea.

We would like to spend at least a few days with our children before we die.

The Mothers of the Disappeared, Kilinochchi, Sri Lanka.