Sri Lanka’s last review in 2012 under the leadership of Mahinda Rajapaksa was nothing short of a disaster. The government’s rejection of 100 out of 210 recommendations, as we wrote at the time, made it one of the most hostile UPR performances on record. 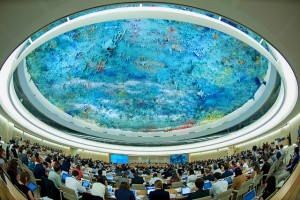 The UPR is a four-yearly process which provides the opportunity for the HRC to regularly scrutinize the human rights records of all member states. It is separate to role that the HRC plays monitoring the government of Sri Lanka’s commitments to justice and reconciliation under Resolutions 30/1 and 34/1 – commitments that we have been monitoring here – but in practice, many of the issues raised will overlap.

Human rights organisations do not have the opportunity to speak. However, 49 written submissions from hundreds of different groups have already been made that will shape and inform the interventions by member states. You can find and dip into those at this link. The Sri Lanka Campaign contributed to this process by last summer publishing a practical guide for grassroots organisations on engaging with the UPR, followed by an interactive planning workshop in Colombo.

After tomorrow’s review, the recommendations by member states will be compiled into a draft report, which was presented and adopted during a further session on Friday 17th November at 17.00pm (local time). At this point, the government of Sri Lanka will provide its initial responses, stating whether it accepts or rejects the various recommendations made. It will then have several months until the formal adoption of the report at the HRC to make its positions final.

What should I be watching for?

Sri Lanka’s last review in 2012 under the leadership of Mahinda Rajapaksa was nothing short of a disaster. The government’s rejection of 100 out of 210 recommendations, as we wrote at the time, made it one of the most hostile UPR performances on record.

This year’s review – which follows a change in government in Sri Lanka and pledges to address human rights issues (including war-time atrocities) – promises a significantly more cooperative and encouraging atmosphere. Yet it remains unclear exactly how the government will balance its recent international charm offensive with the need to respond to tightly worded questions about the lack of concrete progress at home in many areas.

In particular, we’ll be watching to see how the government of Sri Lanka deals with questions concerning allegations, recently made as part of an investigation by the Associated Press, about the ongoing extensive use of torture and sexual violence against Tamils in Sri Lanka – allegations which prompted a number of organisations, including the Sri Lanka Campaign, to last week write to the UN High Commissioner for Human Rights urging his office to launch an investigation. As the International Truth and Justice Project yesterday highlighted, the government of Sri Lanka’s response on this matter thus far has been deeply unsatisfactory.

NORWAY: Norway is concerned about the use of torture by security and law enforcement agencies, as well as by impunity and the lack of an appropriate legal framework to address this.

ESTONIA: What is being done and what progress has been achieved with regard to investigations of alleged war crimes? Have any international organisations or experts been included in these investigations?

Finally, we’ll be looking to see how the Sri Lankan delegation responds to questions about the ongoing plight of relatives of the disappeared, thousands of whom, from all communities, remain hardly any closer to the truth about the fate of their loved ones despite repeated pledges and promises by the government. We will be hoping, in particular, for some meaningful responses to demands recently made by Tamil relatives of the disappeared who have been protesting continuously at various sites across the North of Sri Lanka for over 250 days.

BELGIUM: Belgium wishes to know which concrete measures have been taken by the Government of Sri Lanka to guarantee that victims, including relatives of the enforced disappeared, are provided with full and effective reparation and that those responsible for enforced disappearances are brought to justice?

For further background on the UPR process as relevant to Sri Lanka, we also recommend checking out these handy resources from UPR Info and Sri Lanka Brief.

BRAZIL: What measures has the country undertaken to protect and promote the rights of the LGBTI community and decriminalize consensual same sex relations between adults?