Developments last fall created serious threats for the main sources of livelihood of Tsitelubani residents – livestock and agriculture. The Russian occupation line placed the so called ‘border’ marking banners on agriculture lands and pastures owned by the villagers. As result, a major part of agricultural lands appeared on the other side of the banners. Russian ‘border guards’ strictly warned the locals that trespassers would be detained. Unfortunately, it was not just a warning.

Life is hard, especially when you live in a conflict region and when there is the so called ‘border’ several meters away from your home; ‘the border’ marked with barbed wire. The harsh reality created after the August 2008 war has left the population of certain villages of Shida Kartli region with a legacy of serious problems. One such village, Tsitelubani, used to boast 350 households. Nowadays, the population has decreased. The complicated political and grave social situation has caused high migration, especially of youth, part of which goes in search of jobs to Tbilisi or to Turkey. Some serve in the Georgian army on contracts; the main motivator being the high salary.

Developments last fall created serious threats for the main sources of livelihood of Tsitelubani residents – livestock and agriculture. The Russian occupation line placed the so called ‘border’ marking banners on agriculture lands and pastures owned by the villagers. As result, a major part of agricultural lands appeared on the other side of the banners. Russian ‘border guards’ strictly warned the locals that trespassers would be detained. Unfortunately, it was not just a warning and Russian soldiers often arrest residents of the villages bordering the conflict region. For a first detainment, a person pays a 2,000 ruble fine; going up to 5,000 rubles for a second. If it appens the third time, a person can be sentenced to imprisonment for 2 months to 6 years. Locals say that the detained are not being physically abused. It is noteworthy that Russian soldiers often detain people on territory controlled by Georgian side. They do this because they get bonuses for the detainment of each “trespasser.” One of the last cases like this took place in the beginning of May, when Russians detained Lasha Tvauri, 17, when he was herding his cattle.

“Detainment facts are so frequent because the borderline is very obscure; it’s hard to understand whose land is where. Lasha was herding cattle when herd went to their territory; Lasha tried to follow and they came immediately, captured him and took him to Tskhinvali. Russians herded the cattle back themselves. Two days later, our relative who lives in Tskhinvali paid the fine and they let him go. As he told us they were treating him well there,” Lasha Tvauri’s mother, Ketevan, told the Forum. Right now, Lasha and several of his friends have left to work in Turkey. 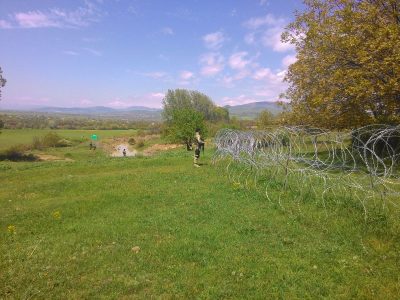 Tsitelubani villagers face the problem of irrigation water too. A lack of water damages the agricultural lands and destroys their harvest.

“We pray for rain to come. Rain irrigates our orchards, but sometimes it is such droughts that everything withers and we stay without harvest. The only help from government was that they installed natural gas pipeline and gave us 200 GEL vouchers. We have also been included in the State project of the Ministry of Agriculture; they cultivated our lands, but what is the point in cultivating if the lands are not irrigated?! We don’t even have an adequate road; we have problem with getting to our lands after it rains… We need more attention as we live in such a place and in such conditions,” Tsitelubani resident, Darejan Gvtisiashvili, told the Forum.

It is noteworthy that Tsitelubani used to be a mixed village. Georgians, Ossetians and people of other nationalities still live here side-by-side. But political events of the nineties forced part of the Ossetian population to leave the village, although, according to Tsitelubani residents, before the August 2008 war they used to have intensive contacts with surrounding Ossetian villages, in which many of them have relatives. Unfortunately, due to the so called “demarcation lines” organized by the occupation forces, those contacts have been suspended. Families, victims of the natural disaster of 1980 in Adjara region, have also been resettled to Tsitelubani at that time.

Six families of Meskhetian Turks repressed in 1944 were resettled from Azerbaijan to Tsitelubani by the initiative of the then government of Georgia in 2007. The State purchased houses for them and gave them one-time financial welfare of 3,000 GEL. According to one of them, Heidar Latipov (Pipinadze), that was the only governmental assistance those families received. The repatriated families did not receive agricultural lands, so necessary for people living in a village and most importantly, they are still waiting to receive the passports of Georgian citizens.

“We have been living here for almost ten years; we have very good relations with the locals. There has never been any opposition on religious or ethnic grounds. Our main problem is that we still have not received citizenship. Due to that we are unable to purchase agricultural lands and children cannot receive education; because of that, many of them do not speak Georgian. We do not benefit from the state programs intended for Georgian citizens either… I was arguing on this very actively when there was the previous government here and I was imprisoned with fabricated charges in 2010. In 2012 I was amnestied and I addressed the new government with the same claims. They are arguing that we are violating the passport regime, but of course we do. Until lately, citizen of Azerbaijan had the right to stay in Georgia during 30 days and after they had to cross the border. The given period has been prolonged to one year now, but how can such a big family keep going back and forth all the time?! We do not have neither financial nor physical possibility of that,” Pipinadze said. According to him, their main source of income is the cultivation of rented lands, which is also very problematic due to the aforementioned lack of irrigation problem.

Tsitelubani resident, Heidar Pipinadze, sees only one solution to the problem of granting of citizenship to repatriated Meskhetians. It is the Georgian President’s Decree on granting them the citizenship.

“I am a lawyer and know that such decrees are issued only on special occasions and citizenship is granted only to those who have been distinguished by their activity in favor of the country. I don’t want to praise myself, but we live in such a complicated region, such grave conditions, but we stand to the hardships and do not ask for anything but citizenship; I am ready to refuse Azerbaijan passport in exchange for the Georgian one,” Pipinadze says.

It is noteworthy that journalists have to work in Tsitelubani escorted by armed Georgian law enforcers. In addition, the law enforcers are also registering names of all strangers entering the village. They explain this is for security reasons. They are dislocated at the block-post at the entrance to the village. The policemen and locals have good relations.

Despitemany difficulties, life continues in Tsitelubani and other villages bordering the conflict region. Meanwhile, the August 2008 war with its grave consequences will unfortunately keep reminding us of itself.

Giorgi Stepnazde is Executive Director at Civil Forum and currently PhD candidate on Conflict Management and Analysis at Tbilisi State University. He is participant of the peace and dialogue process among Georgian, Abkhazian, and Ossetian. His specialization focuses on the historical roots of the conflict between Georgia and Tskhinvali Region/South Ossetia.