Ergneti is one of the numerous villages located next to the administrative boundary line (ABL), the demarcation between Georgia and Tskhinvali region or South Ossetia. Following the Georgia-Russia War in August 2008, barbed wire fences wereinstalled on the ABL hindering the freedom of movement of people and goods. As with many other villages along the ABL, Ergneti is largely affected by socio-economic problems and resulting depopulation.

Under a cloudy sky on a chilly February day, I suddenly glimpsed from the marshrutka departed from Gori that beyond the trees down from the hill Tskhinvali stood out. The marshrutka seemed to be going straight for the checkpoint decked with flaunting Georgian flags, but stopped 200 metres short. After getting off, the marshrutka immediately turned around on the road towards the checkpoint and set-off back towards Gori without people.

Ergneti is one of the numerous villages located next to the administrative boundary line (ABL), the demarcation between Georgia and Tskhinvali region or South Ossetia. Following the Georgia-Russia War in August 2008, barbed wire fences were installed on the ABL hindering the freedom of movement of people and goods. Ergneti was heavily destroyed during the conflict, with around 160 homes burned down (around 80%). Many houses were re-built with the support of the international donor community, but one can still see several shelled and abandoned buildings. 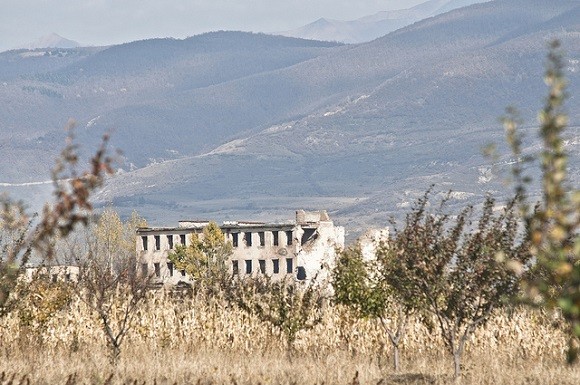 Ergneti is also known for being the location where the Incident Prevention and Response Mechanism (IPRM) – a platform aimed at strengthening security and stability, and addressing needs of conflict-affected people from a humanitarian perspective – takes place once a month between representatives of the Georgian and de facto Ossetian authorities, with the facilitation of the European Union Monitoring Mission in Georgia (EUMM) and the Organization for Security and Co-operation in Europe (OSCE).

As with many other villages along the ABL, Ergneti is largely affected by socio-economic problems and resulting depopulation. According to Amnesty International’s 2017/2018 Report on Georgia, the fencing along the ABL continues to affect “the rights of local residents, including the rights to work, food and an adequate standard of living, owing to the loss of access to their orchards, pasture and farm land”. However, one out of two people think that the borderization is not the only and main reason affecting the socio-economic situation in Ergneti, but they also consider the government responsible for not taking steps to solve this precarious situation.

The presence of youth is almost non-existent and the inner migration of those few who remained is massive. “This village is dead”, a farmer said, “If I find a good job elsewhere, I will leave the village”. The unemployment rate is high and many residents rely on their own agricultural land, cultivating vegetables and growing fruit trees for ensuring not only an income, but also basic supplies for themselves. “There are not shops and people have to go to the nearby village for buying basic items”, a local resident said. “When there was the market before the war, the economic situation was better. I want to live and work here. Government should prevent inner migration by providing new jobs”.

However, the possession of agricultural land is not the solution to all problems. Indeed, the village is facing water shortages also due to the fact that before the war water used to come from the other side of the ABL – “I do not have a job but I only have my agricultural land as a source of livelihood. However, water is less and rationed. This is not enough to grow my vegetable plants”. Another challenge is due to the economic situation which prevents farmers from developing their fields; “We do not have enough money for buying seeds and pesticides. Without income and social helping you cannot invest on your own land”. Another local resident stated: “I used most of my savings for health issues. Now, I do not have money to cure my land. The government should support us with subsidies to develop our farms”. 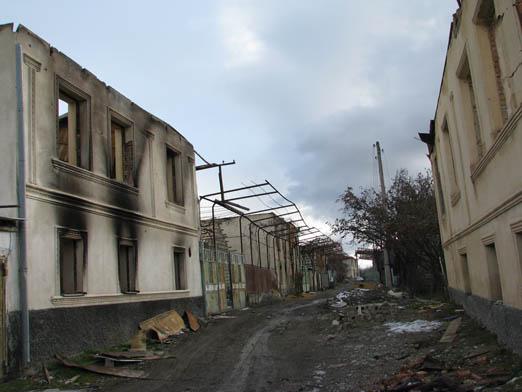 Before the war, many persons in Ergneti used to trade their agricultural products with the nearby territory now under occupation. Moreover, the market in Ergneti represented a crucial socio-economic meeting point where both Georgians and Ossetians used to meet each other to do business. The market was closed in 2005 by the Georgian government, officially because goods and products entered the Georgian market from Russia without paying tax, and to tackle bribery and corruption between Ossetian authorities and Georgian criminals. The closure of the market has dramatically contributed to heightening mistrust between Georgians and Ossetians. Since then, many local residents from the Georgian side have been forced to go selling their agricultural products to the market in the city of Gori (around 30 km away) or even in Tbilisi (110 km). Nevertheless, transportation challenges are also faced. In fact, although local residents welcomed the new marshrutka route Tbilisi-Ergneti, transports start at 9am and finish at around 4-5pm. Many people claim that this time-frame is too narrow for going to work to other cities and coming back.

It is interesting to see how people in Ergneti make relations between actions to promote reconciliations with Ossetian people and the socio-economic situation in the village: “By opening the border and the market, we could start to communicate with each other again. People knew each other before the war. People-to people contact would support the reconciliation process”. Nevertheless, a large part of the residents are pessimistic towards reconciliation with Ossetians – “Russia has the power. I know Ossetian people that are willing to come here but the situation will not change unless Russia leaves the occupied territories”. “Time should pass. We know each other and we know how to communicate in order to re-gain mutual trust. The main problem is that youth generation have never met each other and they have different interests. Language is also an issue. Georgian youth prefer English language whereas Ossetian youth prefer Russian language”.

A little further on, a few steps away from the checkpoint, there is the recently established War Museum, dedicated to the 2008 war. It is established in the basement of a newly-restored home burned down in August 2008 and includes the collection of splinters bombs and fire-damaged items such as children’s toys, half-melted glass bottles, books, cutlery, burned cloths, etc. Pictures and posters documenting the dramatic days of August 2008 proliferate on the walls of the small basement. One can still see the burned beams under the ceiling. Outside of the museum, an old car stands in the middle of the garden riddled with bullets, as one of the most reminding images of the war.

In the late afternoon, some rumblings similar to bad weather could be heard. However, the sky was clear and there were not visible signs of a thunderstorm heading this way. “They are military trainings carried out on the other side of the ABL. We are used to that but we do not know what will happen in the future”, a local resident said. And life goes on in a village full of uncertainties.

Dario Intini graduated with a Master in Human Rights and Democratization and is currently an EVS Volunteer at Civil Forum for Peace in Georgia. His main interest focuses on human rights concerns in conflict-affected areas including economic, social, and cultural rights.