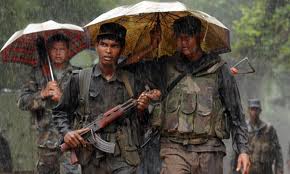 Three years on from the bloody end to its civil war, Sri Lanka remains beset by the challenges of reconciliation, reintegration and rehabilitation, and faces intense scrutiny over allegations of war crimes and widespread human rights violations.

Three years on from the end of the civil war, Sri Lanka continues to face a number of multifaceted challenges concerning reconciliation, reintegration and rehabilitation. The country faces intense scrutiny over war crimes allegedly committed by its military in the bloody finale of the war; whilst allegations of widespread human rights violations – such as executions, the shelling of civilians and other atrocities – have echoed to the international arena.

Human rights defenders assert that up to 40,000 civilians died in the final offensive, yet Sri Lanka maintains that its troops did not kill a single civilian. The UN estimates that some 100,000 people were killed in the fighting in Sri Lanka between 1972 and 2009, with more than a million people displaced, many of whom sought refuge abroad.

The Sri Lankan government refuses to allow a UN-led investigation into alleged war crimes, and has instead launched its own

According to critics, the government is becoming ever more autocratic. It has amended press laws to give more powers to the government to inhibit the free flow of information, whilst the country’s media regulator already has the authority to fine and jail journalists who defy its orders. Excessive government measures indicate that Sri Lanka is descending towards dictatorship, which could severely jeopardize rehabilitation and and reconciliation.

In the concluding months of the war, over 11,000 LTTE (Liberation Tigers of Tamil Eelam) fighters – many of whom were forcibly conscripted by the rebels – surrendered to the army. These former LTTE recruits are at the heart of post-war rehabilitation plans, which aim to reintegrate them into civilian life. These former combatants are required to complete a six-stage rehabilitation program – which could last up to two years – if they wish to receive a general amnesty, otherwise they will face terrorism charges.

On the political side, the opposition Tamil National Alliance (TNA) party continues to refuses to join the Parliament Select Committee (PSC) proceedings. Amidst pressure from its allies, the government has refused to have talks only with the TNA on the basis that they are not the sole representatives of the Tamils.

With respect to rehabilitation processes, the major area where the Sri Lankan government’s has a comparatively positive record is that of de-mining. The de-mining process in the North is nearing successful completion, with over 90 percent of the area where land mines are believed to have been laid during the 30-year civil war having been cleared. With the assistance of the international community, 92 percent of the danger area in the north and east of the country has been cleared.

Statistics show that there were about 280,000 internally displaced persons and 11,700 LTTE combatants who surrendered to, or were arrested by, the security forces. In order to resettle these IDPs, the government has secured assistance to renovate over 24,500 houses and to construct 73,044 new ones.

The resettlement of IDPs is not a trouble-free job because during the war years a large amount of property was occupied by squatters or other illegal owners. In this scenario, Sri Lanka has to bring in special property laws to protect the rights of hundreds of thousands of people displaced by the island’s civil war. Existing Sri Lankan laws give squatters rights to claim ownership of a property after occupying it for ten years without legal challenge, but the government has revoked such powers by introducing legal reforms.

A post-war reconstruction boom and the restoration of fractured infrastructure has been a blessing for the country’s economy. The IMF and Chinese loans for rehabilitation of the northern railway, roads, housing and small enterprise sector has boosted the economy. As a result, the Sri Lankan stock market has been recognized as one of the best performing markets in the world and the country’s growth rate has crossed eight per cent at a time when the global financial market dwindles. Furthermore, in GDP per capita terms, Sri Lanka is ahead of other countries in the South Asian region.

Although the chances of any early resurgence of a violent movement in the country are very blurred, concerns about integration of the Tamils remain, particularly as the Tamil Diaspora, scattered across the world, continue to raise the separate of their own homeland. During the recent Commonwealth Economic Forum and the Queen’s Golden Jubilee celebrations, over 3000 Tamil protesters compelled the Sri Lankan president to cancel his speech because of alleged human rights abuses. The seeds of alienation among the minority Tamils remain pertinent, particularly the sense of estrangement felt by victims of violence and civil war. It is therefore the responsibility of the Sri Lankan government and international community to ensure the processes of reconciliation, reintegration and rehabilitation are based upon principals of justice and humanity. This is the only way forward to heal the scars of war.

Zafar Iqbal is the founder of Press For Peace (PFP), a Kashmir-based organisation working to promote peace and sustainable development. PFP is also a member of the Global Coalition for Conflict Transformation.

To contribute to the debate about conflict in Sri Lanka, please write to TransConflict by clicking here!