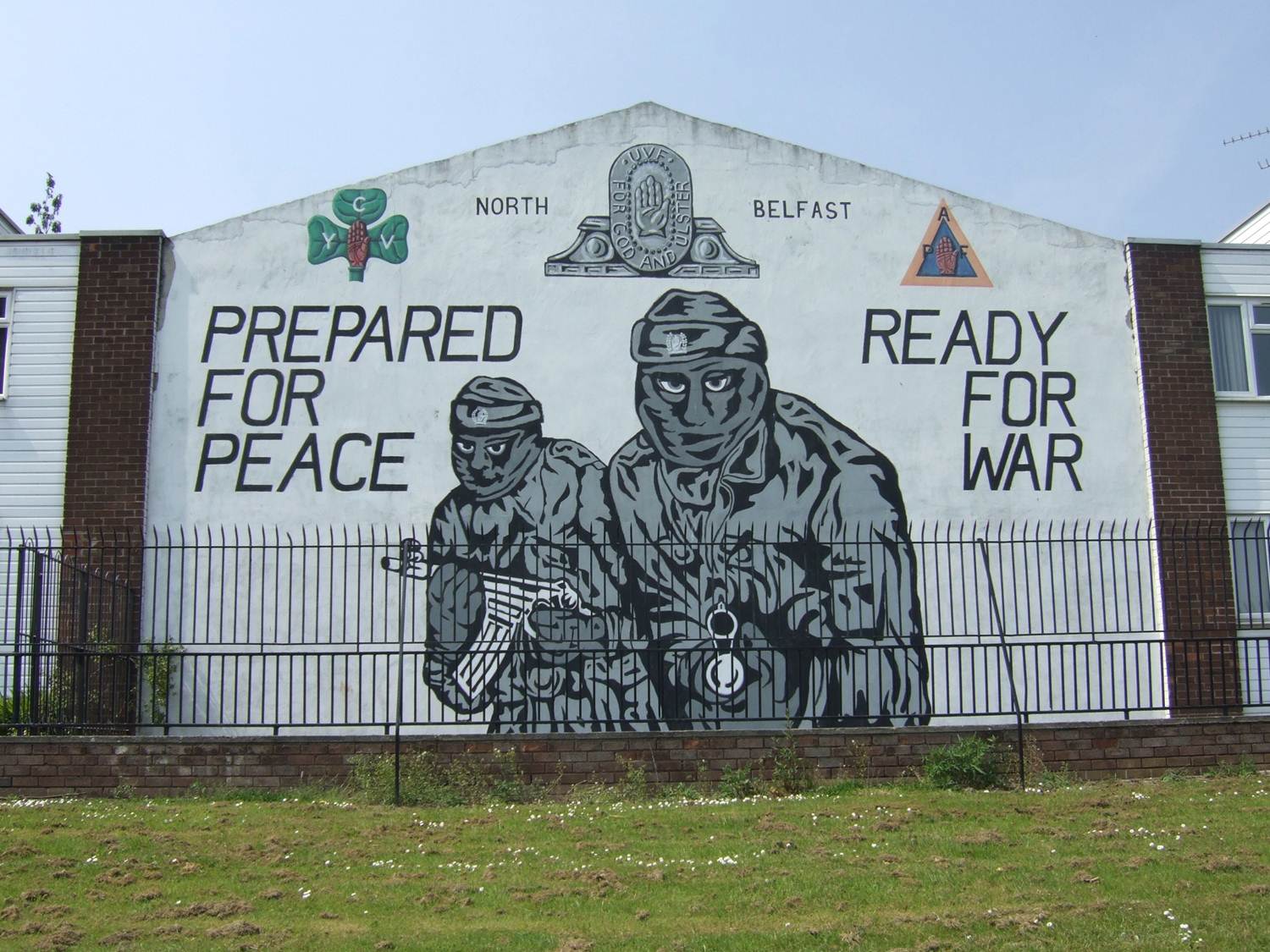 The changing dynamics of ‘post conflict’ political discourse, coupled with the emergence of a new generation who did not necessarily live through the thirty year conflict, requires a re-imagining of conflict transformation by former prisoners. They need to move beyond discourses which informed their journey to the prisons and re-evaluate their roles in the current socio-political context.

Recent events in Belfast have placed focus on Northern Ireland and inter-communal relations in the post conflict’ context. The protests and violence in areas such as East Belfast, in the wake of the decision by Belfast City Council to alter the protocol on the number of days the Union Flag flies at Belfast City Hall, exemplify the transient nature of interactions between communities in relatively small areas of Belfast, and Northern Ireland more generally. This is of particular interest in terms of the work conducted by former prisoners in relation to conflict transformation in Northern Ireland, as it reveals the consequences of decisions by the top level’ for those living at the coal face of inter-communal relations; the interfaces. The interfaces of Belfast remain the most prolific exemplar of the communal divide in Northern Ireland. These areas are marred by physical barriers (referred to as peace’ walls) which separate both communities and effectively annex each community from the other. They also provide a focal point for inter-communal violence and hostility.

The period in the wake of Belfast City Council’s decision has witnessed some of the most overt sectarian violence in a decade in a large number of these urban working class communities in interface areas of East Belfast; with over a hundred Police Service of Northern Ireland (PSNI) officers injured; and an estimated £15 million loss by businesses in the wider area of Belfast. However, the immeasurable damage to existing and future relationships between the dominant Loyalist and Republican communities at this interface and beyond remains to be seen, and is a story which is sure to play itself out long after the headlines have faded. Former prisoners have been central in their representation of communities in the debate surrounding the issue of the Union Flag at Belfast City. They have also been often been a visible presence on the interfaces during these periods; and as such will continue to inform the nature of conflict transformation initiatives in its wake.

The basis for the centrality of former prisoners in the Northern Ireland peacebuilding story long precedes the Belfast/Good Friday Agreement. Many were involved in this process from the outset of the conflict, inside and outside of the prisons In the wake of the referendum on the Agreement in May 1998, the Northern Ireland Sentences Act’ was utilised to aid the early release of prisoners incarcerated as a result of involvement in the conflict, colloquially referred to as the Troubles’, in the United Kingdom and the Republic of Ireland. This period was essential in moulding the nature of peacebuilding approaches in Northern Ireland as it effectively sought to transform how individuals imprisoned during the conflict were conceived of in both legal and political terms. The evolution of prisoners associated with the conflict as being criminalised to an approach where they were deemed to be participants in a broader violent conflict provided the basis for their formal involvement in conflict transformation at a grassroots level. In effect, their involvement in a violent conflict was seen to give them a sense of legitimacy’ in peacebuilding efforts.

Currently, former Loyalist and Republican prisoners continue to be involved in a broad range of work which includes community representation; capacity building; addressing issues relating to the impact of socio-economic deprivation in areas; responding to contested cultural practices; and engaging with initiatives which seek to deal with the past’. Many of these initiatives are ‘cross community’ in their orientation.

The variety of this work illustrates the multi-levelled functions these actors perform in accordance with conflict transformation approaches. However, recent events surrounding the Union Flag at Belfast City Hall demonstrate, there is a tension for former prisoners between their continuing involvement in work identified as being community relations orientated and their role as community representatives. This was particularly evident for Loyalist former prisoners in recent weeks. While their work is often orientated around building relations between communities, many articulated their support for the protesters and their campaign to reverse Belfast City Council’s decision.

This brings into question how former prisoners may move beyond the essentialised identities and/or territories to transform the basis of their own involvement in the conflict. It must be recognised that former prisoners centrality in the minimisation of violence and in attempts to normalise’ relations in the areas are effectively evidence of conflict management’ in particular areas rather than any sense of what may be termed transformation’.

This was certainly the case in East Belfast in recent weeks, where former prisoners were keen to emphasise their role in containing inter-communal violence. Considering the scale of the violence, there has been been questions on the ability of former prisoners to exert influence on younger members of paramilitary organisations, and indeed young people more generally, in these areas. However, the idea that former prisoners are in a sense detached from a new generation of those agitating for a particular community is not exclusive to the Loyalist community. Republicanism is in a sense suffering the same identity crisis as Loyalism in this light. Republican former prisoners have witnessed the emergence of a disengaged generation of Republicans; some of whom reject the political path mainstream Republicanism has chosen and instead seek a return to political agitation through violent means.

Therefore, a question arises on the role of former prisoners in the coming years. It also brings into focus the issue of how long these actors can continue to utilise their experiences to inform present day relationships. Many former prisoners have articulated their criticism for the conflict transformation or peacebuilding industry’ to date, and criticise it as they do not view the peace dividend’ as being experienced in specific areas such as the interfaces. This reflects a sense that much of the political progress experienced at the top level’ has somehow not been translated in areas which continue to be flash points for inter-communal hostilities such as interfaces.

The changing dynamics of post conflict’ political discourse, coupled with the emergence of a new generation who did not necessarily live through the thirty year conflict, requires a re-imagining of conflict transformation by former prisoners. Their role as effective community representatives affords an opportunity to move beyond established narratives of inter-communal violence to one which genuinely engages with and indeed challenges the political sphere. Former prisoners in a sense need to move beyond discourses which informed their journey to the prisons and instead re-evaluate their roles in the current socio-political context.

This ’bottom up’ approach also requires a reciprocal shift at the top level’. The growing schism in political discourse in Northern Ireland has resulted in the delay in a strategy (originally the Cohesion, Sharing and Integration strategy which has been on the table since 2010) to deal with the hard’ issues all relating to issues of identity; commemorations; education; parading and interfaces. It may be viewed that the political sphere have shirked their responsibility on these matters and as a result grassroots based actors (such as former prisoners) have been expected to manage the resulting fall out of fractured relations; a lack of mutual understanding; and a continuation of the legacy of sectarianism. Indeed, it is this lack of political unity and engagement on these issues makes it increasingly difficult for those on the ground to assert any positive influence on these emotive matters. This is not to suggest that a strategy such as CSI could act as a panacea for community relations in Northern Ireland. Rather, such a strategy could and should provide much needed political leadership on the issues that require top level’ engagement if they are to be addressed in a meaningful manner.

The evolving nature of the involvement of former prisoners in conflict transformation in Northern Ireland is therefore evidence of conflict transformation as a non-linear process, rooted in the communities the conflict most adversely affected and necessitates constant re-evaluation in response to the changing dynamics of the post conflict’ environment.

Dr. Orna Young is a researcher working with the Institute for Conflict Research, Belfast. In her role she specialises on issues related to conflict, peacebuilding, human rights and social transformation. Orna holds a PhD in Politics from Queen’s University Belfast, where she researched the nature of conflict transformation and peacebuilding in interface areas of North Belfast. Her wider research interests focus on alternative applications and considerations of conflict transformation and social capital, as well as urban conflict and group identities.