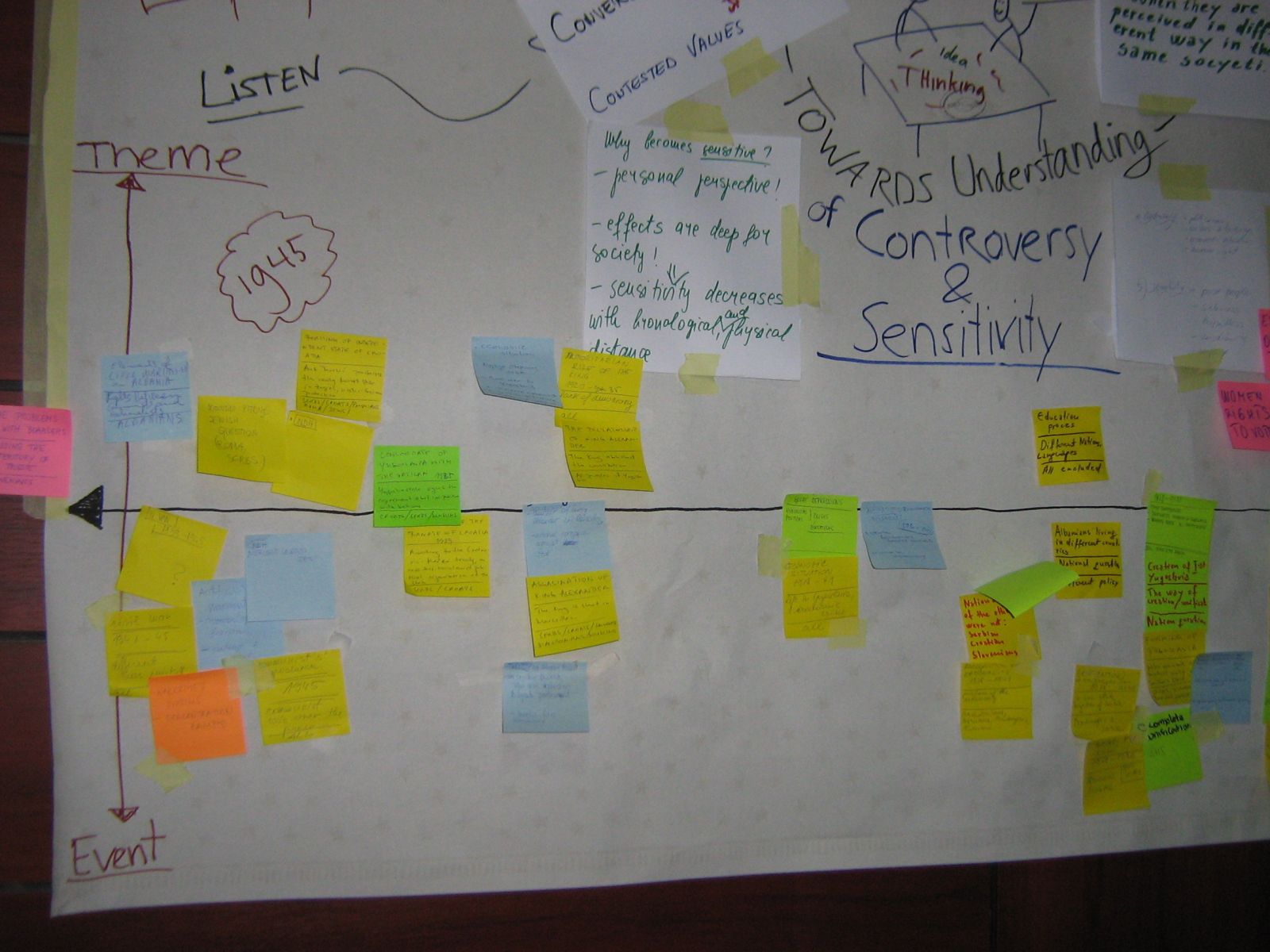 EUROCLIO offers a successful model for many history educators in Europe to address innovative, and often controversial, content as well as collaborative, active, meaningful and effective ways of learning and teaching.

Is EUROCLIO’s approach enough to also qualify as example for reconciliation through teaching history? Several scholars have recently individually developed benchmarks which they consider valuable for a reconciliation process. I would like to follow Elizabeth Cole in her introduction to ‘Teaching the Violent Past’. She quotes Hein and Selden when she argues that content and methodology can promote long-term reconciliation by enhancing critical thinking, the willingness to question simplistic models, empathy skills and the ability to disagree about interpretations of the past and their implications for present social issues without resort to violence (1). She promotes with several others a history education, which develops students’ ability to approach the past with scholarly detachment, as a tool to reconcile conflicting pasts (2).

David MacDonald writes in his chapter of ‘Confronting the Yugoslav Controversies’ under the title ‘Living Together or Hating Each Other’ about the role of history education (3). He argues that there is a need to challenge the dominant negative national narratives and to also stress the more positive experiences of living together. In all our work we indeed try to widen the traditional story. In the book on the Yugoslav history the group therefore also presented topics such as sports, the film culture and tourism.

David MacDonald continues to look for further elements which should support the reconciliation opportunities and stresses, quoting Biro and Milin, the importance of friendly relations between the members of the different ethnic groups. Again, in the various mentioned projects, this is what certainly is happening. On one trip we crossed the border between Bosnia and Serbia in a bus with the Croatian team members. The border police ask them what they had been doing, and they told him that we had been working on a common history textbook with colleagues from Bosnia and Serbia. He asked if it was possible even to talk to each other. The answer was, while all were laughing, of course, we are not only colleagues, we are friends!

The Peace Building Initiative writes, often quoting Elisabeth Cole, that ‘the transmission of memory and history in a post-conflict period can play a significant role in evolving new identities of citizenship’ and ‘having a sense of a shared history is a central component in the formation of identities and what is generally referred to as the reconciliation process. National and international researchers generally agree that a fundamental goal of history education is to “transmit ideas of citizenship and both the idealized past and the promised future of the community.” It is not surprising then that reforms to history education are nearly always specifically about changing the representations of the political community’s past “to promote tolerance, inclusiveness, an ability to deal with conflict non-violently, and the capacity to think critically and question assumptions that could again be manipulated to instigate conflict. It is often complemented by the concept of ‘peace [or peacebuilding] education’ which seeks to support “an educational process that allows students to articulate, accommodate and accept differences between and within groups […]. This entails a distinct two-fold process that nurtures and constructs positive inter-group relations while marginalizing and deconstructing negative inter-group relations.” History education occupies a specific place in the reconciliation process in that it reaches beyond the elite level and becomes “part of people’s lives, and also part of the mid-level and grass-roots institutions, such as schools, whose workings relate more closely to the lives of average citizens.

Mirroring these ideas to EUROCLIO’s work, when working in areas with political, ethnic and religious tensions and conflicts, it seems that we abide many of the requirements laid out by academic experts. However even a five year project with Bosnia, Croatia and Serbia was only able to start addressing the minor controversies in the region. The big ones related to the Second World War and the Wars of the Nineteen Nineties remained untouched. And although a new project has been set up to teach about the history of the former Yugoslavia from 1900-1945 by developing new educational material, the participants are still hesitant directly to tackle the wars of the nineties (4). They are aware that, as Elisabeth Cole put it during her lecture in Utrecht in May 2010, it will be a big challenge to fulfil the legitimate request of victims, that their suffering should be acknowledged in textbooks and at the same time not to burden a new generation with fuel to prolong hatred and willingness to fight (5). We are only at the beginning of finding a workable approach for classroom use.

However many warn with the Peace Building Initiative that “history education potentially can promote reconciliation, a certain stage of reconciliation needs to be reached before textbooks can be revised, the public can accept these revisions, which challenge narratives held dear by certain sectors of the population, and teachers can challenge discredited narratives and stereotypes and risk controversy in the classroom.” (6). Unfortunately this grass root work is recurrently unpopular as it is generally not reflecting fashionable, and often populist, political stances. In Russia the liberal attitude of the nineties has disappeared, and a new battle between government and historians and history educators is fought to interpret the recent past more positively (7). In Georgia the government promotes the writing of a new textbook to inform the students about Russia’s negative influence over the last 200 year on the developments in the country (8). And also in the former Yugoslavia, certainly the present governments of Macedonia, Serbia and Bosnia are not eager to introduce textbooks with a more balanced approach. And the decision of the Israeli Ministry of Education to exclude events such as the first Lebanon war and the Oslo Accords from the textbooks shows that there is still much work to do, and I fear also it will never be finished.

After more than twenty years of projects implementation, EUROCLIO has been able to establish sustainable relations with other organisations active in the field of reconciliation and peacebuilding, such as the OSCE, the Council of Europe, UNESCO, the European Union, etc. These major players regularly request EUROCLIO expertise and involve the Association and its members in their wide-scale initiatives. However international and local politicians, media and donors are often interested in instant results and spectacular projects, which immediately have to tackle the most sensitive and controversial topics. They are using concepts such as quick start projects, which last for a maximum of three years, and are envisioned as quick solutions for the existing problems, also for history teaching. It is unfortunately not easy to convince these politicians, media and donors that a more step-by-step approach has far more sustainable results. It is an important task for those professionals within EUROCLIO and beyond, who want to continue the present pathway, to continue to find successful ways to convince international and local politicians, media and donors that the new way to address school history really can contribute to sustainable peace, stability and democracy.

Hasty instant solutions are not possible in education. Changing habits and beliefs are delicate, sensitive and time consuming assignments for those involved. However, I do believe that EUROCLIO has offered a successful model for many history educators in Europe to address innovative, and often controversial, content as well as innovative, collaborative, active, meaningful and effective ways of learning and teaching. If history education professionals recognize that their work matters, they are more than willing to develop a history teaching that supports a sustainable world.

Joke van der Leeuw-Roord is the executive director of EUROCLIO, a member of the Global Coalition for Conflict Transformation.

4) Project proposals to address these very sensitive topics are submitted by EUROCLIO to the EU, the OSCE, the UN Alliance of Civilisations, and Belgian Ministry of Foreign Affairs. Unfortunately it takes most donors very long to decide if they would like to fund these projects. The danger is that the momentum gets lost.

6) See articles about the creation of a Commission to ‘counter attempts to harm Russian interests by falsifying history’ by president Medvedev in May 2009 in History in the News on the EUROCLIO Website.

7) See the announcement of such initiative on the website of the Georgian Ministry of Education in March 2010,