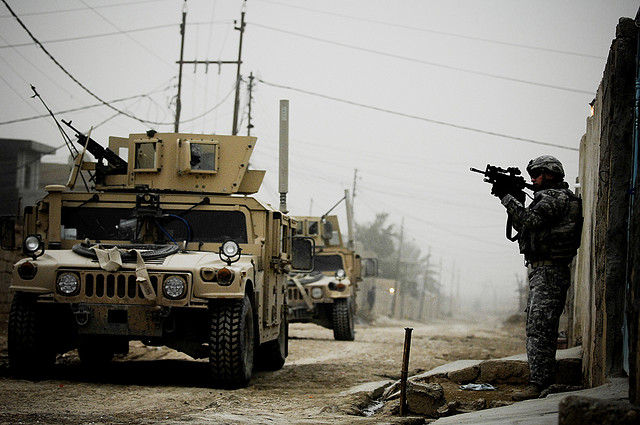 As NATO prepares to withdraw from Afghanistan, and the engagement in Iraq passes 10 years, government leaders must take on board the lessons learned from the past decade.

As NATO prepares to exit Afghanistan, and the 10-year anniversary of the Iraq invasion is discussed, military and civilian leadership (and war-weary populations) will be tempted to turn their backs on two highly frustrating and costly experiences that failed to deliver immediately tangible results. This is ill-advised – the need to stabilize post-disaster societies is a core capability that nations will need in the future, and have rarely possessed when needed.

This blog entry cautions government leaders (specifically military and diplomatic) to not only devote resources to internalizing lessons from the past eleven and a half years, but to ensure sufficient resources are committed to training, equipping, and educating organisations for eventual employment in the fiscal-constrained future.

While the looming departure from Afghanistan, and the West’s reticence with deeply involving itself in long-term, resource-intensive actions in Libya, Mali, and Syria, the temptation exists to turn-away from the expensive and seemingly inconclusive experiences gained during the endeavours in Iraq and Afghanistan. This is a mistake.

In the wake of Vietnam, the US made a conscious decision to turn-away from the lessons and skills built during the long involvement in Vietnam, in favour of repositioning for a conventional land-battle against the Soviet Union, or a proxy country. This shift resulted in the core element of a coalition that decimated the Iraqi Army in mere hours in 1990, and also was bloodied in the streets of Mogadishu a few years later. These two experiences sent a clear signal: do not attempt to match the US and her allies in force-on-force warfare that enables the use of their vast technological superiority. Instead, choose to draw them into urban settings where insurgency can take root and thrive.

So what? And, what does this have to do with post-2014? While there’s a current aversion to conducting large-scale interventions, and the long-term commitment that comes along with them, at some point in the future, world events, domestic and international pressure, and political climate will compel governments to act in just such a way.

When that happens, the displacement of nefarious groups (and even regimes) that cause such dire situations will transition to an insurgency – for a group seeking to compete for power against a resource-superior foe, it’s a viable option. While counter-insurgency, or “COIN”, is somewhat of a dirty word in many circles, especially after most recent frustrations in Iraq and Afghanistan, the fact remains that the West must prepare itself for future endeavours’ where they will surely face insurgents. But, in an age of austerity, how do countries prepare for the eventuality of employing force to achieve the goals they seek? There are three “musts” for the near-term.

1. Current doctrine is a good start, but wrong

The 2005-2006 effort that led to the US Army and US Marine Corps’ current doctrine for COIN and Stabilization is rooted in historical experience, which works well until you encounter situations that do not resemble those experiences.

Instead, doctrine should be founded in social science (from the likes of Bronislaw Malinowski, Ted Gurr, and Peter Corning), in order to inform practitioners on why instability occurs in the first place and what societal essentials are required for stability.

Once practitioners understand the science, they can then apply the art of context to define goals specific to each situation. A scientific grounding is essential for developing sound plans that account for human actions, while also taking local contexts into account (something that was largely missing in Afghanistan and Iraq). Failure to apply context to the science will again result in costly and time-intensive endeavours that the public lacks patience for.

2. Rebuilding is a must for any hope of sustainable peace

There is no such thing as an absence of governance. In areas where the situation is so dire that the West will be compelled to react, governance will likely be weak, corrupt, illegitimate, maniacal, or some combination thereof. An intervention’s end-state must include turning-over to a capable government that provides basic services (security included) to the population.

Yes, this is resource intensive – there is simply no other way to grow “good governance”. The “Light Footprint” option is more politically palatable, but is not viable for achieving long-lasting change. At best, nations may achieve short term results in containing threats, but areas that foster large-scale radicalization all have common issue: lack of strong and effective governance that deters such behaviour.

Counter-terrorism (drone strikes and other “surgical” actions) only temporarily affect organizations that seek to do us harm. Like shark’s teeth, new leaders will emerge with similar (or worse) ideological beliefs and behaviours. Sustainable peace is only achievable through a commitment by combatants to stay through the intervention and expend the time and capital necessary to establish contextually-appropriate governance, basic services, and civil society. Failure to do so leaves areas vulnerable to the return of the status quo or worse. Rebuild must be contextually appropriate.

The military must prepare for the conflict they will face, not the conflict they’d rather face. Military and civilian leaders cannot be too quick to reset their formations for large-scale “force-on-force” fighting at the expense of the lessons from the past ten years. Lethal core competencies are essential for winning conventional stages, and any fighting encountered after, but even if we enjoy initial victories, insurgency will always be the branch plan for our enemies.

Softer, “unconventional” skills are a must when we attempt to secure tactical victories. These skills will be available when needed only if military leaders (at all levels) stress the development and retention of stabilization knowledge through continuous training and education. Likewise, civilian agencies must value deployed diplomatic and technical skills in career progression paths, or such expertise will not be available when called-upon.

Even if such skills are preserved, civilian agencies and experts, in sufficient quantity, will be slow to arrive on site during contingencies. Once on the ground, force protection requirements will inhibit their ability to fully circulate and conduct their duties – especially at the tactical-level. Possessing uniformed and trained stabilization practitioners, who train, travel, and work with the commander they support, and also have the ability to circulate wherever and whenever they see fit, is in the best interest of the military, and of the overall stabilization goals.

Even non-uniformed practitioners can benefit; by forming close working relationships, agency experts (who may be under more stringent travel and security requirements) can gain greater understanding of the situation at hand through a uniformed colleague serving as their “eyes and ears”.

Retaining the lessons-learned from the past ten years, and ensuring readiness in future endeavours, will not be easy. Fiscal austerity will impact readiness, regardless of what direction military and political leadership point the uniformed services towards. However, making difficult decisions to allocate resources to this readiness is exactly what military and political leaders must do now, to ensure readiness appropriate to realistic future threats.

Ethan Harding is a major in the US Marine Corps. He has deployed numerous times in stability operations roles in both Iraq and Afghanistan, most recently serving as Nimroz Provincial Director in Afghanistan.