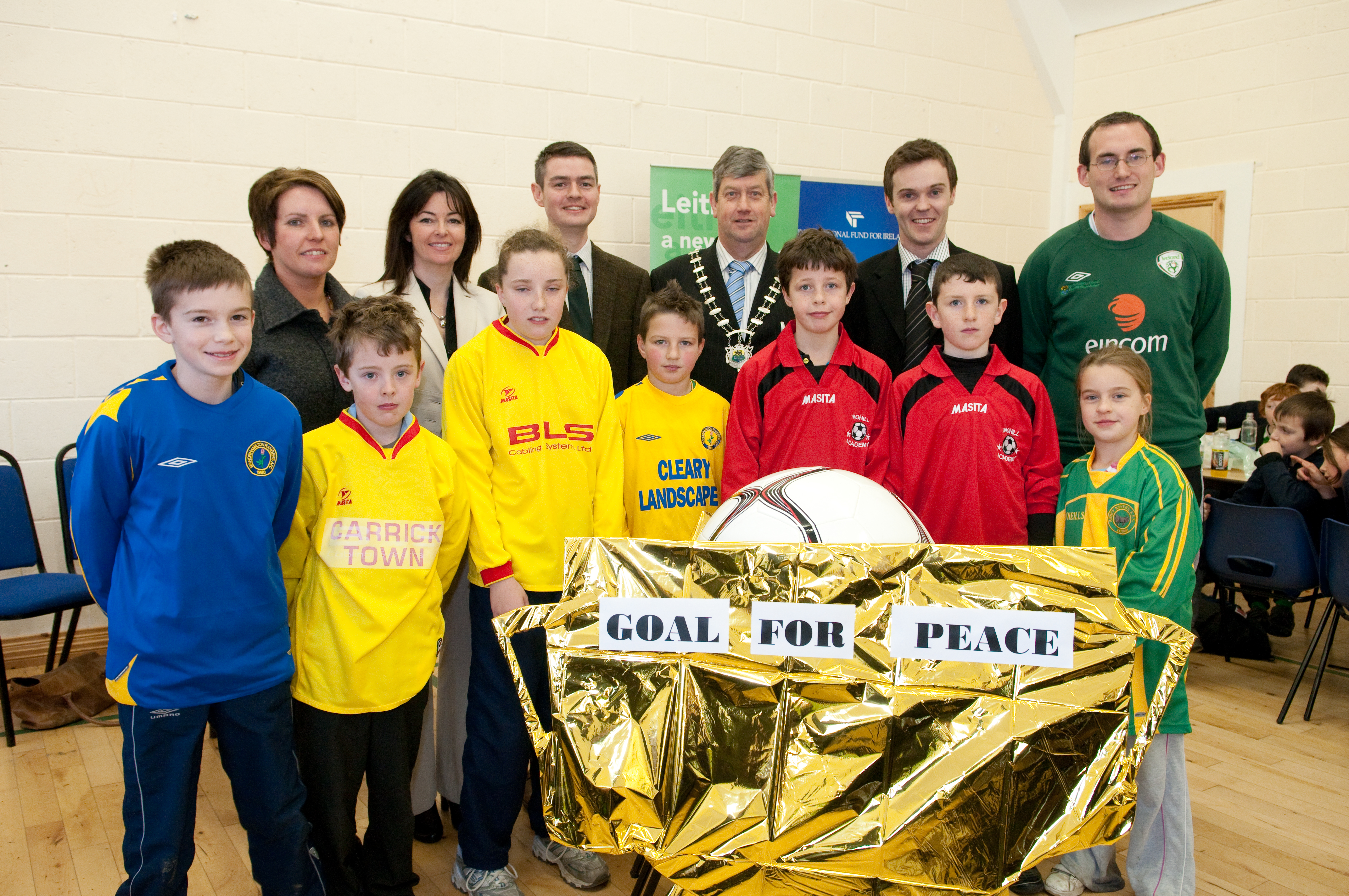 Sport is an incredible approach to helping youth in areas of conflict resolve prejudice; helping them to rethink the way they treat others, whilst assisting in the overall development of youth and society.

On a wall in Northern Ireland, there is a letter posted from a young girl that reads, “I have learned that people from different communities can get along, and I will never forget this experience.” Belfast, Northern Ireland is well known for the “peace walls” and murals that illustrate events and feelings connected with the protracted conflict in the region, but this girl’s letter hangs on a different kind of wall. It is one of many notes from youth displayed in the small office building of Peace Players International – an organization that helps transform conflict by teaching sports to youth.

PeacePlayers has worked in schools and community centers in Northern Ireland for a decade to dissolve some of the division that still remains between Catholics and Protestants. They also have branches in Cyprus, South Africa, and Israel and Palestine. PeacePlayers is not the only organization to integrate sports and peacebuilding. There are countless charities and initiatives involved in similar work. Football Beyond Borders is another emerging group that has traveled to the Middle East and West Africa, using sports to “tackle political, social, and cultural issues.”

The practice of using sport in peace and development is rapidly expanding as the numerous ways it positively impacts communities is being recognized. Even the United Nations has an Office on Sport for Development and Peace – UNOSDP. The UN has used sports as a way to help former child soldiers reintegrate with society, and to “promote reconciliation” in various countries in Africa, the Middle East, Central America, and other regions. (1)

It is evident that sports can teach numerous desired attributes to participants, such as confidence, achievement, goal setting, and sportsmanship. Sport offers a productive, healthy hobby for young people that shapes them in a progressive way. But how exactly can sport aid in transforming conflict? While sports can promote teamwork and cooperation, there is still concern that sport could potentially perpetuate disputes because of its competitiveness.

According to Megan Lynch of PeacePlayers International, sport is one of the best platforms for teaching youth how to deal with conflict. PeacePlayers has developed a unique, effective curriculum aimed at confronting the challenges youth face when getting frustrated or angry with their team members. If negative emotions erupt during practice or competition, PeacePlayers explores the reasons why, then thoroughly trains on ways to change perspectives and empathize to help team members rather than cling to grudges. They show how empathy and compassion lead to greater effectiveness for teams in achieving goals and winning games. (2)

PeacePlayers also teaches how these problems and solutions are analogous to larger societal issues. Sport then becomes a perfect stage to rehearse the emotions, actions, and scenarios associated with conflict. Rather than just learning about football, basketball, or rugby, participants are practicing skills they can use in their own lives, and in their communities.

Another added benefit is “Sports gets kids’ attention,” explains Megan Lynch. Youth might not be so eager to sign up for a workshop aimed at teaching community development, but if you advertise a program involving football, they will be excited to participate and learn. This is partly why PeacePlayers has established itself as a respected institution in Northern Ireland – where many children attend either Catholic or Protestant schools with limited integration, making it difficult for them to dismantle biased viewpoints to which they are often exposed. Playing sports allows them to intimately interact with one another. “When they’re cheering for each other, they start to forget who is what religion,” Lynch says. (2)

Through researching diplomacy and sport, Omar Salha believes that sport can “bring various people together,” and “expand their worldview.” His research demonstrates how sport has the ability to break down misconceptions by promoting communication, dialogue, and greater understanding of other cultures and religions. (3) This seems to be true for the youth in Northern Ireland who, after participating in sports and community development workshops reported to have gained a belief that Catholic and Protestant communities could integrate, and that “different religions are ok,” as one child wrote.

Recent research from the Center for Human Movement Sciences has explored how communication in sports practice, and on the playing field, in addition to teams having a common goal, causes an increase of the chemical oxytocin in the brain. Oxytocin plays a role in the brain’s ability to feel empathy. It makes us feel bonded to others with feelings of trust and generosity. (4) If playing sports can create these emotions, then what better way to bring enemies together to begin reconciliation than by having them play in integrated teams?

Oxytocin can create powerful feelings that leave a lasting impact. This is one reason using sports to teach peacebuilding is so effective. It could be attributed to why youth who participate in sports and peacebuilding programs often feel changed, enlightened, and strongly influenced – just as the young girl whose note to PeacePlayers said, “I will never forget this experience.” When observing youth participate in sports and community relations workshops in Northern Ireland, their observable behavior demonstrated increased feelings of unity and empathy.

Sport is an incredible approach to helping youth in areas of conflict resolve prejudice. It can help them rethink the way they treat others. Along with conflict resolution, sport also assists in the development of youth and society. In today’s world, we now have the largest number of youth in history, at nearly 1.8 billion. Millions of these young people face unemployment, and lack access to education. (5) This puts them at risk for developing addictions, or seeking out inclusion in radicalized, extremist, or terrorist groups that perpetuate conflict. Through his research on sports and culture, Kaleem Hussain has discovered that sports programs can be a way to prevent youth from falling into radicalized extremism, as it allows them to divert their time, energy, and abilities in a constructive way. (6)

Tom Perez of Football Beyond Borders (FBB) has personally seen the way sports positively impacts youth and their communities, especially in London where FBB is based. Many youth he has worked with have experienced a “tough upbringing, tend not to have role-models, and often they get into gangs or drugs.” FBB uses sports to facilitate teaching work and entrepreneurial skills to youth. This builds their confidence in their abilities to find and create opportunities to advance their life circumstances. It has also helped some youth move away from involvement in gangs and focus on working or engaging in more productive hobbies. (7)

Clearly, sports programs that incorporate peacebuilding into their curriculum are a necessity – especially in areas affected by prolonged conflict. Sports should play an essential role in helping youth think objectively and dissolve discrimination as they mature and become leaders in society. It would be ideal if every school had their own local sports program that incorporated teaching peace, diplomacy, community development, and conflict resolution into its curriculum. In order for us to move toward that goal, it is important that we support organizations such as PeacePlayers International, Football Beyond Borders, the United Nations Office on Sport for Development and Peace, or any of the other pioneering initiatives that are assisting in bringing such creative and positive change to our communities, because as Nelson Mandela said, “Sport has the power to change the world.” (8)

Heidi Green teaches Global Studies, Conflict Resolution, and seminars for youth. She will soon begin an MA at the Centre for International Studies and Diplomacy at SOAS, University of London. She recently presented a TED talk on teaching Empathy and Conflict Resolution at TEDxHonoluluED.

6) Hussain, Kaleem. “How Has Islamophobia And/or Multiculturalism Affected the Role of Sport for Muslims and Muslim Societies and Cultures – Both Locally and/or Internationally?” Muslims and Sports. SOAS University, London. 6 June 2013. Lecture.