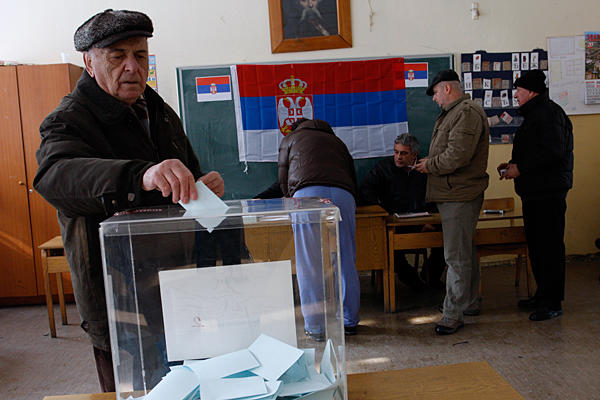 Detaching membership – for both Serbia and Kosovo – from finding an immediate solution to the Kosovo issue might help everyone move forward with a greater sense of security and an openness to cooperation.

It is beginning to look more and more that the November 3 election may fail to resolve the issue of Kosovo.  Radical nationalists on both sides want it to fail and have been doing what they can to keep turnout low.  The Kosovo Albanian majority government in Pristina has been throwing up whatever obstacles the EU and US allow.  “Kosova” symbols on ballots, efforts to keep Serbian officials from visiting Kosovo to encourage voting (including threat of arrest), political detentions of Kosovo Serb candidates and rejecting Serb IDPs on voting lists.  In the north, those opposing participation in the election are holding rallies, tearing down election posters and delivering messages in the traditional manner by throwing grenades.  Meanwhile, some in the EU seem still intent on demanding Belgrade’s complete surrender now before allowing Serbia to move forward to membership.  Belgrade seems the only player seriously working to make the elections a success.  Serbian officials have repeatedly called on Kosovo Serbs to vote and warned of the consequences of a boycott, especially in the north where it could lead to local governments in the hands of supporters of the Pristina regime.

Everyone seems to agree that the likely voter turnout in the north may not exceed 15-20%.  Anything approaching 30% would be considered a victory.  Actually, any turnout sufficient to elect northern Kosovo Serbs at least minimally acceptable to their community would be a success.  This would at least allow room for further evolution along the lines of a status-neutral approach to decentralization of local government with continued links between Kosovo Serbs and Serbia.  In North Mitrovica that could mean the election, for example, of Oliver Ivanovic as mayor.  Oliver started out as a “bridge-watcher” but lost support from hardliners in his community when he accepted compromise with – and participation in – the administrations in Pristina and Belgrade.  But perhaps it would not be held against him in all quarters of the Serb community that he learned English and is an astute politician ready to play the game, in the interests of that community, within the existing rules.  Perhaps because his winning office would disappoint nationalists on both sides, he and his family have been the target of physical attack.

The northern Kosovo Serbs could use the November 3 opportunity to elect leaders recognized by the internationals, Pristina and Belgrade.  This would be a good way to exit the “parallel” universe they have been trapped in since 1999.  The Serb communities in the north could continue as before with their own local institutions and their own local leaders but now with a “legal” – and neutral – status usefully nestled in both Serbia and Kosovo.  Makes sense to me.  But the decision is for the northerners themselves.

So what if the vote is too low to be considered legitimate or ends up electing those not representative of the Serb majority in the northern four municipalities?  Pristina would demand imposition of those “elected” nevertheless.  Belgrade would face the choice of either accepting that outcome or breaking the deal brokered by Brussels.  That means choosing between being perceived as handing over the northern Kosovo Serbs to the Albanians or losing the opportunity to advance into the EU any time soon.  Either outcome could lead to hardening of lines and increased chances of conflict.  Belgrade breaking its deal with Pristina would please the nationalists on both sides as it would lead to further resistance by the Serbs and demands by Pristina to settle the matter through use of force.  Belgrade acceptance of an election outcome seen as illegitimate by a majority in the north would do the same but raise tensions even more by leading the northerners to consider extreme measures (fight or flight?).  The UN, NATO and EU would be put back into the hot seat in either case.

The northern Kosovo Serbs may see failure of the election as a final way to make it clear they want no part in an “independent” Kosovo.  Faced by the choice between violence and/or possible ethnic flight, would it then be time for the international community to reconsider the idea of partition?  Perhaps the Germans would loosen their death-grip on Serbian EU membership?  Detaching membership – for both Serbia and Kosovo – from finding an immediate solution to the Kosovo issue might help everyone move forward with a greater sense of security and an openness to cooperation.