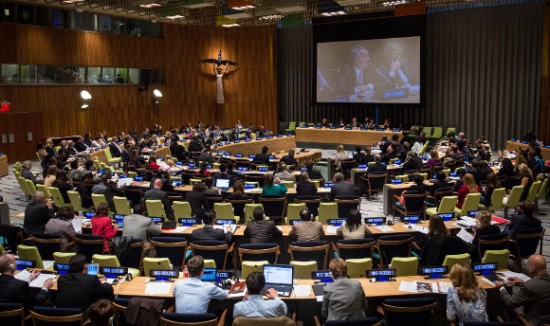 Can local peacebuilders become a crucial link between the international development industry and some of the most at-risk communities?

As the 2015 deadline approaches, the UN is working to draw up a new set of development goals. At first glance, there’s not a lot this elaborate process has to offer local peacebuilding organisations. International targets require a level of universality and concrete measurability, while community-led initiatives and social-political cohesion don’t get much of a look in. Peacebuilding and security certainly didn’t when the first Millennium Development Goals (MDGs) were decided upon relatively quickly and quietly in 1999.

However, for their renewal through the Post-2015 Agenda and Sustainable Development Goals processes, the expansive consultation has allowed a much broader range of perspectives and experiences of how international development can be coordinated and prioritized. Crucially it is also looking to actors beyond member states and UN agencies to lead on their implementation. Given the breadth of the consultation, the resulting mandate will be a formidable influence on the whole international development framework over the next 15 to 20 years, from village councils to the World Bank.

Local peacebuilding organisations have two opportunities here. The first, involving some risk and so is perhaps less promising, is to try to directly shape this process. The other, which perhaps holds more opportunities, is to focus on positioning for the impacts of the new framework.

There have been two key developments in the consultation process for post 2015. The first, and most visible, is that it has led to a fairly wild scramble among the larger NGOs to influence targets in line with their priorities and expertise. Those organisations, which have the capacities, relevant specializations and international advocacy budgets, are lobbying for goals and principles within the framework which align to their own. The competitive tone is palpable in New York; it is openly acknowledged that alongside the greater international investment in real development challenges, some organisations will win out through these advocacy efforts to ensure future funding, and others will lose.

The second key development in this broad consultancy process has been the opening of a door into the murky, under-regulated world of ‘dynamic’ public-private partnerships. For better or worse, 2015 will most likely be remembered as the year international development formally transition from a community into an industry.

The scale, scope and stakes of the consultations mean small organisations cannot significantly influence them. Opportunities for local-level organisations to ‘engage’ with NGOs and UN agencies are certainly there; through an array of thematic working groups, public campaigns, major groups, panel events and civil society consultations. Yet more often than not these can be fraught with the danger of being manipulated into useful props within a multi-billion dollar game of positioning and leverage.

Staying as far away as possible from the whole thing may appear the best option for local peacebuilders. However, beneath the jostling and politicking in New York over the next year, there may be some quietly seismic shifts unfolding that hold opportunities for local-level organisations working in conflict affected areas. Here is where it may pay off to pay close attention.

Conflict resolution – a key word in the post-2015 talks

It’s no secret that the terms ‘civil society’ (28 million Google results) and ‘conflict resolution’ (10.9 million) have been steadily dominating the international development lexicon in recent years, and they have not been absent from the Post 2015 consultations. With conflict now carrying a more significant gravitas in development policy circles, development NGOs that have expertise in human security are lobbying for a peacebuilding and violence prevention goal within the new agenda.

This is essentially a progressive wish list of principles for all development projects to emphasise human security and equality of outcomes across communities, and to explicitly identify and address drivers of conflict. They have called for a consultation process that “actively includes people and civil society from conflict-affected states”.

There is another, broader aspect of the consultation process that may offer a different sort of opportunity to local peacebuilders. There have been pretty serious challenges to the MDG approach to development targets as ‘improving averages’ of mortality rates, education and so forth. The challenge has been to instead focus on ‘closing the gap’ between the top and bottom of societies. If fully implemented this would mean many more development projects would be funded and evaluated to specifically target the most marginalized, vulnerable and remote.

If more than just the rhetoric of this equality driven success criteria end up in the final agreement next year then local peacebuilding organisations could turn themselves into key players within the new international development framework. Rather than being left to pick up the pieces from disruptive development projects born out of reductive econometric models, á la Paul Collier and Jeffrey Sachs, local peacebuilders may have opportunities to advise on and oversee the delivery of services, goods and security in their own communities.

Local peacebuilders are often the best placed community organisations to identify the needs and long term interests of the most marginalised and vulnerable during complex political emergencies and within conflict affected areas. There will be times when taking on a direct role in resource allocation will not be in a peacebuilding organisation’s interest, especially if it is trying to maintain a neutral space for fractured communities.

Yet even in these situations being able to set criteria for agencies on the risks and impacts that international aid will have on their communities may make major differences to the success of both development projects and peace processes.  If these locally led organisations can get the right help from those who know how this game works, these peacebuilders may provide a crucial link between the international development industry and some of the most at-risk communities it ought to be serving.

Jaimie Grant is a staff writer at ThinkAfricaPress.com and Research Analyst for UN Disarmament African office. Based in Lomé, Togo. All opinions are his own.