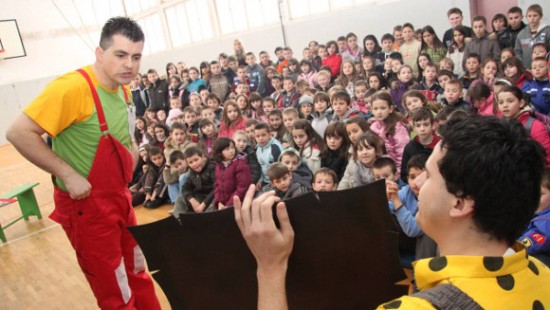 Ethnic divisions in Bosnia and Herzegovina are possibly greater than ever before. The Genesis Project, though, shows that reconciliation is not an impossible dream.

There was no yellow, no green, no red in their dreams. Children were only dreaming in black and white, as all the other colours had faded away during the war.

It was to help them and their families that in 1998 the Bosnia and Herzegovina (BiH) organisation Genesis Project launched the initiative “Obojimo snove” (“Let’s colour the dreams”). Through a psycho-social approach, the centre helped children deal with trauma and loss and it created a safe place where they could draw, paint and create artworks.

“Psychological research shows that deeply traumatised people dream black and white dreams. For this reason we decided to imbue their lives with at least some colour,” says Dijana Pejić, the Genesis Project’s director.

Most of the children at that time were living in refugee camps. They had lost their fathers or other members of their family, as well as their homes. Pejić says that the project had a therapeutic effect for all of them, but “recovery was very gradual”.

Colours have slowly come back in the dreams of the war-affected generations, but the scars of war are still deep. Eighteen years on from the signing of the Dayton Peace Agreement, that put an end to the three and half-year long conflict, BiH’s society remains extremely fragmented. Ethnicity is still a primary mode of identification and the education system is deepening the divisions rather than bridging them. Poverty and unemployment, especially among young people, are rife. And according to some estimates, in BiH there will be unexploded landmines for another 72 years.

The war may be over, but the Genesis Project has still much to work on.

The Genesis Project was established in 1996 in Banja Luka, the capital of Republika Srpska, one of the two entities the country was divided into at the end of the war.  Its initial aims were to educate children and adults about peaceful conflict prevention and resolution, whilst reducing the negative impact of mines, unexploded ordnance, small arms and light weapons on local communities.Their strong belief in the transformative power of education, combined with the potential for people to grow and heal, has been a prime motivation throughout all these years.

Establishing an organisation in such a context of massive post-war destruction – with thousands of internally-displaced persons living in temporary accommodation – required not only remarkable courage and determination but, even more importantly, also a vision of what the future could be. That vision was manifested through the organisation’s very name, derived from the Star Trek episode “Genesis Project”, which was a codename for a scientific research to turn uninhabitable planets into places favourable for human living. 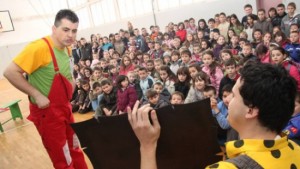 In spite of all the challenges faced, this vision of a peaceful and prosperous society – though initially a distant goal – has remained the Genesis Project’s driving force, helping it became one of the country’s leading peacebuilding organisations.

In 1996, the Genesis Project launched the “Mobile Video Bus”, an initiative to help refugees scattered throughout the country. To alleviate their grim day-to-day reality and to restore some sense of normalcy, the Genesis Project organised theatre performances and improvised cinemas. Through their “mobile libraries” – vans equipped with books, magazines and daily local papers from the areas people had been expelled from – they provided refugees with a vital connection with their communities.

In 1998, at the “Let’s colour the dreams” centre, the organisation also worked with groups of mothers from different ethnic groups, who were as frightened and paralysed by the horrors of war as their children. Within the same project, they organised live puppet shows about the UN Convention on Children’s Rights. At first, the shows were performed solely in the Republika Srpska, BiH’s predominantly Serb entity. Quite soon, however, they became the first organisation working also in the Federation of Bosnia and Herzegovina, the country’s other entity, where they established successful cooperation with the Tuzla-based organisation BOSPO.

As Pejić underlines, “It was rather courageous to implement projects in the other entity so soon after the war, as most people in these areas suffered greatly”.

Since then, the Genesis Project has developed a comprehensive network of partners throughout the entire country, implementing projects that benefit all ethnic communities and demonstrate the potential for cross-entity cooperation.The success of their projects shows that reconciliation amongst ethnic groups is not an impossible dream.

From 1999 until 2005, the Genesis Project worked on mine-risk education, an issue which even today remains one of the most pressing – if somewhat neglected – in BiH. According to estimates of the Mine Action Centre of BiH, over 3 million mines were laid during the war, with some 30,000 scattered minefields covering roughly 2.5 per cent of BiH’s territory.

The locations of many of these minefields remain unknown, directly affecting the safety of around 900,000 people. The most vulnerable are school-children and people living in rural areas. Since the end of war, more than 1,500 civilians have been killed or injured by landmines. Mine clearance activities are still ongoing and it will take long time before the country is entirely decontaminated. 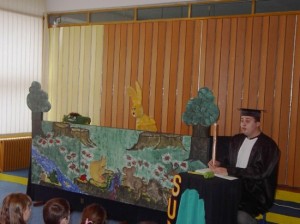 Children were less intimidated by disturbing and serious messages when they were delivered by puppets rather than directly by a grown-up person, and they were more likely to retain the important messages. To achieve lasting results, the Genesis Project trained over 1,200 teachers to contibue running mine-risk education seminars throughout the school year.

According to Ljubiša Vasić, a Genesis Project staff member, the mine clearance activities have slowed down because of lack of financial support, so much so that it may take more than 72 years to clear the whole country.

“The new generations, who were born after the war, are completely unaware of potential mine threats,” adds  Vasić. “Mine warning should be a permanent activity. In some developed European countries, such as Austria and Germany, even now dedicate one school class per year to educating school children on threats posed by landmines and unexploded ordinance still remaining after World War II.“

Two schools under one roof

In 2003, in parts of BiH with mixed Bosniak and Croat populations, the government established the so-called “two schools under one roof”: children from the two different ethnic groups were going to school in the same building, but they were physically separated and they were thought different curricula.

Though initially envisaged as a temporary model, these schools quickly became a permanent feature of education in these areas. Despite the expectations of the international community that such a solution would contribute to the gradual merging of schools and their respective curricula, this model has been strongly defended by political and education authorities, as well as by parents, who perceive segregated education as a protection of their national identities. Today, some 54 such schools are understood to remain in BiH.

Instead of harnessing the potential of education to contribute to reconciliation in post-war BiH, its education system is separating children along ethnic lines from the earliest phase of their socialisation.

Since 2009, the Genesis Project has therefore dedicated its energy and expertise to a project entitled “Safe environments for children in divided and segregated schools in Central Bosnia”.

“These schools are a mere consequence of multiple other problems of a country,”  says Azra Talić, Genesis Project’s programme officer. “There is no agreement about future common goals, nor willingness to allow the ‘others’ the right to express their religious, cultural or other belonging.”

Despite many efforts to find a mutually-acceptable solution, the subjects classified as ‘national’ (i.e. language and literature, history, religious education and even geography) remain contentious. Talić argues that an “insistence on language difference has reduced all attempts at relaxing relations to the level of absurdity, with teachers insisting on the religious/ethnic identification of children”.

The “other” is often portrayed as an “enemy” or at least irreconcilably different.Ethnic distance in BiH is today perhaps greater than ever before. According to Talić “the biggest problems are segregation and isolation, as well as general absence of tolerance, acceptance and understanding”.

The Genesis Project is now implementing its project in 16 segregated schools in central Bosnia – or “8 roofs”, as they say jokingly. The project aims at creating a safe school environment, through the implementation of a social inclusion model. They educate participants on peaceful conflict resolution skills, improving communication and cooperation between different ethnic groups.

For instance, they organised a session with a Catholic nun who talked about tolerance and mutual respect, virtues which are the core of all religions. The Genesis Project also took a mixed group of children to the town of Fojnica, home of one of the oldest Catholic convents, where they learned about the centuries old cooperation between Islam and Catholicism in that area. Despite some apprehension, these discussions were extremely well-received.

“In communities so deeply divided, to have a chance to gather together Bosniak and Croat children is a huge achievement”, underlines Talić.

The project requires the authorisation of the competent ministries for every single activity, an often demanding and time-consuming task. Sometimes this is simply due to complicated administrative procedures. More often than not, however, it is due to the uncooperative attitude of the authorities.

For example, the education minister of the Central Bosnia canton, Greta Kuna, stated that “two schools under one roof” will not be suspended because “one can’t mix apples and pears. Apples go with apples and pears with pears.”

Education continues to be a highly-politicised issue because of the perceived fear of ‘being minoritised’ by a dominant group. Cohabitation does exist in many places, but it is mostly accompanied by a simultaneous ignoring of the other.

“This is our biggest problem,” stresses Talić. “Children are taught to ignore the other and not to learn anything about them. This is pedagogy of fear and hatred, based on a deeply entrenched division between us and them”.

Overcoming these divisions through local peacebuilding activities such as those of the Genesis Project is a long and gradual process, but it is key to ensuring that BiH does not witnesses a return to the war and atrocities of the nineties. The scars of war are still there, but now it is time to heal them.