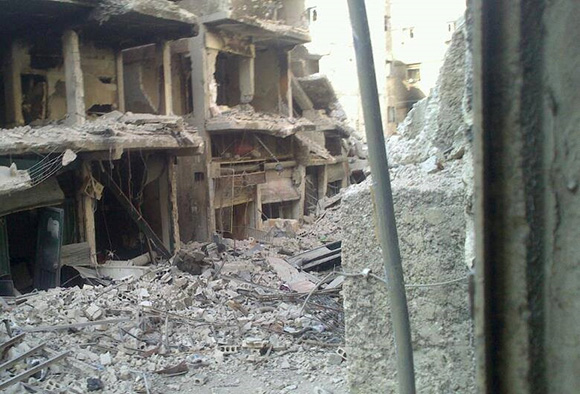 In the chaos of Syria’s civil war local peacebuilders are finding ways to bring respite for tired civilians from suffering and danger.

For over two years Syria’s war has wreaked a devastating course through the lives of millions of civilians. In its latest analysis, the UN has estimated that over half of Syria’s pre-war population have been directly affected by the ongoing conflict, some 10 million people; 6 million have been displaced from their homes, 2.2 million of which have been forced to flee for the succour of neighbouring countries. Syria’s war shows no signs of abatement and daily the immensity of human tragedy grows.

Syria’s society is becoming more polarised too. Irreparable crimes are being committed by both sides, the opposition and the regime headed by President Bashar Assad whom the opposition wants to oust. In this climate it seems nigh impossible that any side will push for peace soon: the external political opposition remains intransigent, the Syrian government is defiant and the veritable motley of armed opposition militias on the ground discordant.

But in unexpected places we can find local initiatives that, at least for the time being, present the best opportunity to bring respite for tired civilians from suffering and danger.

Abdullah Khatib is a young man, he is also a Palestinian Syrian and a resident of Yarmouk, a Palestinian refugee camp set up in southern Damascus following the Arab-Israel war of 1948. I talked to him on Skype recently about a peace initiative he, in coordination with several local NGOs, is trying to broker with the government.

Under siege by government forces Yarmouk camp has been all but deserted, of its 150,000 original residents fewer than 22,000 remain today. In November last year with armed opposition groups encroaching on the camp the government began firing artillery shells and making aerial attacks on Yarmouk. Thousands of Yarmouk’s residents fled, mostly to neighbouring Lebanon.  After the opposition won control of the camp the government tightened the siege and continued the bombardments. Yarmouk’s remaining residents have been starved and cowed into submission. The situation today is perilous.

Abdullah tells me that since 4 months residents have been unable to bring food, fuel for generators or medicines into the camp and there is an acute water shortage. He works for a local humanitarian NGO called Basma which has been unable to secure emergency food supplies since 2 months. Worst of all Abdullah says is the effect on children who have no special foodstuffs or medicines. Another activist tells me signs of malnutrition and disease, dry skin and red lines on children’s stomachs, have become commonplace. In August two children died of marasmus, a severe form of malnutrition.

The list of tragic conditions goes on. Electricity supply to the camp was cut 7 months ago and fuel for the few generators operated by camp residents is prohibitively expensive because it must be smuggled into the besieged area. There is no gas for cooking or heating and with the winter months fast approaching this will add to the suffering.

In recognition of the parlous circumstances and the acute suffering of the camps remaining residents a coalition of local NGOs have begun negotiating a ceasefire with the government. Abdullah has played an important role in those negotiations, acting as an intermediary and mediator.

Abdullah tells me that the government has demanded opposition forces leave the camp, that control returns to it and that any weapons be handed-over.

“What do the civilians of Yarmouk want?” I ask. Abdullah’s answer is unembellished, people want to be able to leave their homes and they want their human rights to be respected. This would mean the government stopping indiscriminate bombardment of Yarmouk and lifting the siege allowing food and medicines to enter the camp and civilians safe-passage out.

Negotiations are ongoing but Abdullah tells me the problem is there are factions that do not wish negotiations to succeed. For one thing the opposition groups currently in control of the camp are not participating in the negotiations. Another compounding issue has been that the government delegation is represented by the erstwhile Palestinian political leaders of Yarmouk. Having absconded to regime-controlled Damascus, Abdullah blames these former political leaders for embroiling Yarmouk in the war. He charges that they brought weapons into the camp in the first place and openly sided with Assad, politicising Yarmouk and eliciting reaction from the opposition.

Do camp residents trust the government to keep its word if a deal is struck by such discredited representatives? People would be relieved to accept any offer presented by the government, Abdullah tells me, they are exhausted and even if the government’s motives were dubious Yarmouk’s residents have no other choice.

What does Abdullah himself think about the prospect for a ceasefire, is he optimistic? He is slightly dismissive; it is obvious there is little to be optimistic about these days. “The military situation will determine the outcome”, he says.

When fighting broke out Abdullah was in his 4th year of university studying sociology. He had been volunteering for some time with UNWRA and helping a children’s corral group. When the NGO Basma was launched in 2009 he began work with it.

Convinced of his role here and now, Abdullah unassumingly states that he intends to stay-on in Yarmouk aiding his community through its darkest days. He like many of the other activists I have spoken to hopes for a free Syria that upholds human rights, for a civilian state that can be shared by all Syrians. At the same time he admits that the volume of destruction is huge, the sectarian wounds difficult to heal, the obstacles to rebuilding Syria inordinate.

Abdullah, as so many of his generation whose hopes and former lives have been robbed by violence, feels his post-war future not in Syria but abroad, perhaps in Europe where he can finish his education. Yet today he is a remarkable example of a local peacebuilder and surely worthy of our support.

Euan Brown is an Australian aid worker working with an international aid organisation in Jordan responding to the Syria Refugee Crisis.