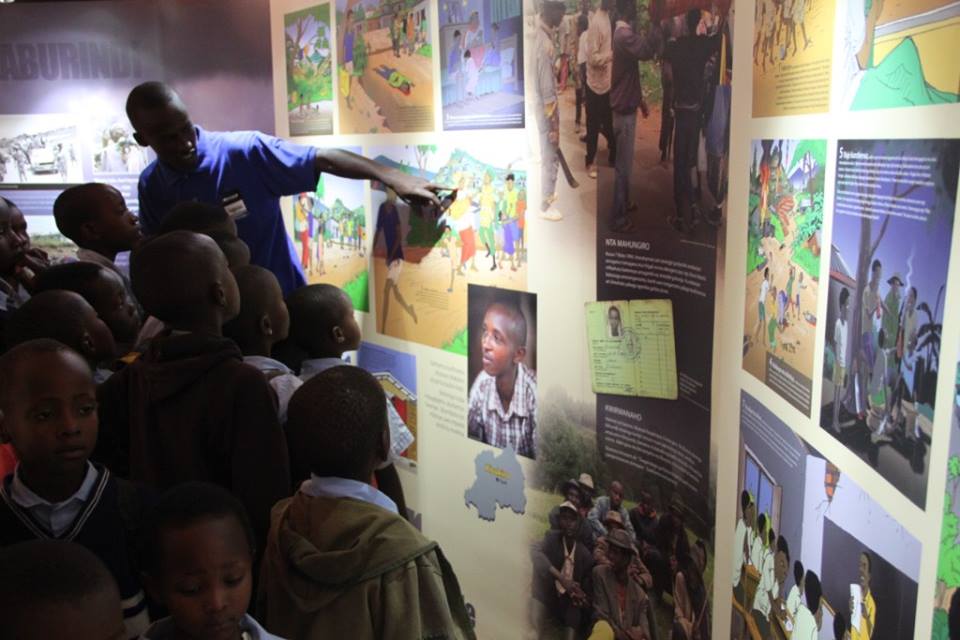 The ‘Peacebuilding after Genocide’ mobile exhibition used story telling and dialogue methodologies to educate people about the 1994 genocide, to examine what causes violence and to send messages of peace and social cohesion.

“After this exhibition I feel I am responsible for peace within my neighborhood, my family, my school and my friends. I have a feeling that I am planting a tree of peace in me, in Rwandans and I hope that my children will live in peace.”

– A secondary school student who attended the mobile exhibition.

The mobile exhibition was organized by the Aegis Trust Rwanda, in collaboration with Never Again Rwanda, Ibuka, Heza and Vision Jeunesse Nouvelle. It took place in Huye from August 19th to September 8th 2013. The main beneficiaries of the project were primarily secondary schools and the wider community, with around 4873 people attending the exhibition over a three week period.

The exhibition used story telling and dialogue methodologies to communicate to thousand of participants who joined to learn from the past. In the stories, messages that contribute to social cohesion and peacemaking were told, along with those that explored the causes of genocide and mass violence. 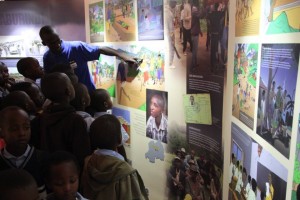 A good example is the story of Grace who, aged ten, when fleeing with her family to the Democratic Republic of Congo (DRC), saw a crying baby clinging to her fatally-injured mother by the roadside. The mother implored her to save the baby, but her grandmother ordered her to leave it.

Grace took the baby in her arms and said, “If I have to die for this baby, I will”. Naming the baby Vanessa, she carried her to Goma and protected her despite threats from genocidaires. Today, Grace is still a mother to Vanessa, now 19.

“Grace’s actions demonstrate to pupils on the peacebuilding education program that she had the ability to think for herself and see beyond the language of dehumanization and hatred,” remarked one participant. 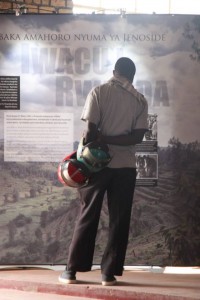 The “Peacebuilding after Genocide” exhibition was based on the question whether peace is possible in Rwanda after what happened in 1994? The exhibition is the anchor for all outreach programs. It has been designed to educate people about the 1994 genocide against the Tutsi, and to examine what leads to violence and what leads to peace. According to its organizers, it is a tool for the promotion of social cohesion amongst students, teachers and the general population.

A moment for story telling

From the very first words, the exhibition emphasizes that every Rwandan has a story – stories of the past, present and the yet to be told stories of the future. The difficult, traumatic and sad story of genocide was told largely through the eyes of three children, whilst the second part of the exhibition tells nine stories of peacebuilding and reconciliation. 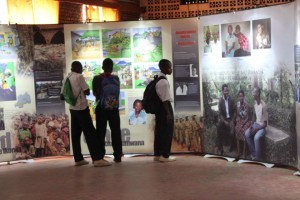 These stories have been chosen to be as inclusive as possible in terms of region, gender and generation, featuring people with diverse experiences of – and relationships to – the genocide. For example, the stories of the genocide are told through the eyes of three people who were ten years old in 1994 – a Tutsi survivor, a Hutu witness and a Hutu girl who rescued a baby.

The peacemaking stories included various experiences from local communities, students and women who came together to support each other and enable reconciliation. 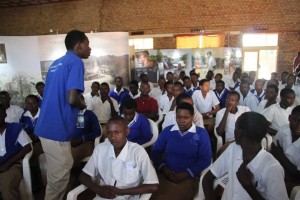 From the very beginning, the facilitators stressed that this exhibition was not about telling people what to think, nor to enforce reconciliation or a particular notion of what peacebuilding is.

Instead, their roles were mostly focused on encouraging participants to consider what they think about peace in Rwanda, and about the future. During their testimonies, those who attended the exhibition affirmed that this has been a good space for them to share their past.

Never Again Rwanda will continue to provide all means to enhance young people’s capacity to analyze the root causes of conflict, and facilitate dialogue among peers in order to generate ideas and activities that work towards sustainable peace and socio-economic development.

Never Again Rwanda (NAR) is a human rights and peace-building organization that was established in response to the 1994 Tutsi Genocide. NAR is a member of the Global Coalition for Conflict Transformation.