Although the wars have passed, the need for peace education in the former Yugoslavia remains more pertinent than ever. The First Children’s Embassy in the World Megjashi is a local organisation tirelessly promoting peace and advocating for the rights of children in Macedonia.

Whilst the wars of the nineties ravaged most of the former Yugoslavia, Macedonia remained almost unscathed; a single safe haven amidst a sea of violence and destruction. At the very onset of the war in Bosnia and Herzegovina (hereinafter, BiH), hundreds of Macedonian families selflessly hosted children – regardless of their ethnicity or religious background – fleeing the country, providing the very homes and security which they lost during those turbulent times.

The Yugoslav tragedy, however, did not end with the termination of war in BiH, but was perpetuated by the escalation of armed conflict in Kosovo and NATO’s aggressive military intervention against Serbia. All the while, Macedonia kept its borders open and provided shelter for around 300,000 Albanian refugees from Kosovo. And just when it seemed that all the wars were finally over, in 2001 Macedonia itself was caught-up in armed insurgency, with its Albanian minority demanding greater autonomy and rights.

Throughout all these years, one organisation – the First Children’s Embassy in the World Megjashi – worked tirelessly to alleviate the suffering of refugee children from war-torn areas; all the while promoting peace and advocating for the rights of children. The wars have now passed and the countries of the region are gradually, if somewhat unwillingly, grappling with their roles and responsibilities during those years, yet the need for peace education remains more pertinent than ever.

The need for peace education

Though the first educational programmes were provided for refugee children from BiH and Kosovo, the perceived need to systematically deal with growing intolerance and ethnically-motivated violence in Macedonia – primarily amongst young Macedonians and Albanians – prompted Megjashi to focus on peace education.

In April 2011, Megjashi started implementing its peace education programme, in partnership with the German NGO, Kurve Wustrow – Centre for Training and Networking in Nonviolent Action, and with the support of the German Federal Ministry for Economic Cooperation and Development (BMZ), within the frame of the Civil Peace Service Programme. 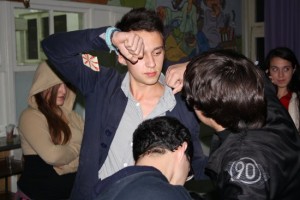 The programme aimed “to promote non-violence and peace culture as the core values of Macedonian society and to effect the adoption of peace education into the formal educational system.” The peace education project evolved from Megjashi’s earliest and most highly acclaimed multi-cultural clubs in high-schools around Macedonia in 2003-2004, with the aim of fostering communication between different ethnic groups.

Kurve Wustrow’s role throughout the peace education programme – which will run until 2015 – is to provide guidance and develop Megjashi’s capacity; whilst Megjashi’s experience and understanding of the particular traits of inter-ethnic conflicts in Macedonia has been an invaluable asset in determining and planning project activities. According to Sebastian Schweitzer, a German civil peace worker engaged on the project:

“This form of cooperation is very important, as we wanted to avoid externally-imposed, ready-made solutions. Instead, the project is envisaged as locally/nationally-owned and one of its key benefits is that it is a learning process for both Megjashi and the German partner. Our key objective is to use synergy drawn  from professional backgrounds and experience of both organisations, respectively, which should enable us all to realise sustainable peacebuilding programmes with lasting change in those societies afflicted by conflicts. Another important element is capacity development of Megjashi which should enable them to continue their peace education programme beyond given time-frame of our cooperation.”

The idea behind the project was to create a model for peacebuilding education which would be applicable in any school setting in Macedonia, since current trends demonstrate that latent conflict – based upon prejudice, stereotypes and ignorance – can be even more pernicious than the overt conflict that is present in multi-ethnic areas.

Therefore, in the first phase of project’s implementation, a group of 12 teachers and 6 junior peace educators from three schools in Skopje were selected to participate. The schools selected represent three different types of schools:

The teachers and young peace educators are jointly participating in five training courses on peace education, focusing on several aspects – such as non-violent communication, peace activism, dealing with the past from a personal perspective – as well as on practical skills which will enable them to organise and conduct workshops or trainings on their own. Equipped with these skills and knowledge, the group of 18 has already established youth clubs in each of the three schools offering educational programmes on the aforementioned topics.

The advantage of this approach is that it is school-tailored, specifically adjusted to suit every individual school. The greatest challenge is that no structure is strictly defined; instead, it is the responsibility of the teachers and educators.  In order to alleviate such a daunting undertaking, a team of external trainers have been tasked to mentor school clubs, and to help teachers and peace educators improve the quality of the training methodology and education. 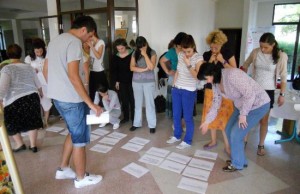 The next stage will be the development of a model of peace education, which would be implemented in three schools outside Skopje, followed by evaluation of its overall impact. Subsequently, a proposal will be presented to the Macedonian Ministry of Education for the curriculum to be incorporated into mainstream education.

“The ultimate objective is to instil and develop a culture of peace, since violence is increasingly more manifest in schools in Macedonia. I believe that by introducing peace education into the official curriculum, a significant step would be made in preventing youth violence. Hardly a day passes without violence in schools; our children are not safe. Whilst the state is indeed endeavouring to provide basic security – i.e. securing a policeman per school – that in itself is not a promotion of peace, non-violence and peaceful conflict resolution, which in fact is crucially important for multi-ethnic schools. Therefore, peace education would guarantee early prevention and a decrease of violence through a gradual change of prevalent attitudes and behaviours, as well as through requisite skills for conflict transformation and positive social interaction.”

“Whilst we do have civic education, with certain elements of peace education integrated therein, I still find that insufficient. Peace education must not be equated with human rights or political education, because it is based on the prevention of violence and of potential conflicts. It is the fact that exactly there, i.e. in the realm of prevention, schools lack adequate activities for conflict prevention, which often results in the breakdown of communication between young people of different ethnic backgrounds burdened by prejudices and stereotypes, and often resorting to verbal and physical violence, frequently with grave consequences.”

“For me personally, this is a unique opportunity to be directly involved in a peacebuilding project aimed at fostering structural change in Macedonian educational system, which will replace existing – often violent – patterns of conflict resolution with an approach based on a culture of peace. Working with my Macedonian colleagues is a continuous learning process about Macedonia, the Western Balkans and peacebuilding in general. Through planning process, we started  a common path of mutual learning which helped us to understand what peace-building and international cooperation is really about.”

Integrated effort, expertise and experience will hopefully bear fruit, with the incorporation of peace education in Macedonia ultimately serving as a positive example for the entire region.