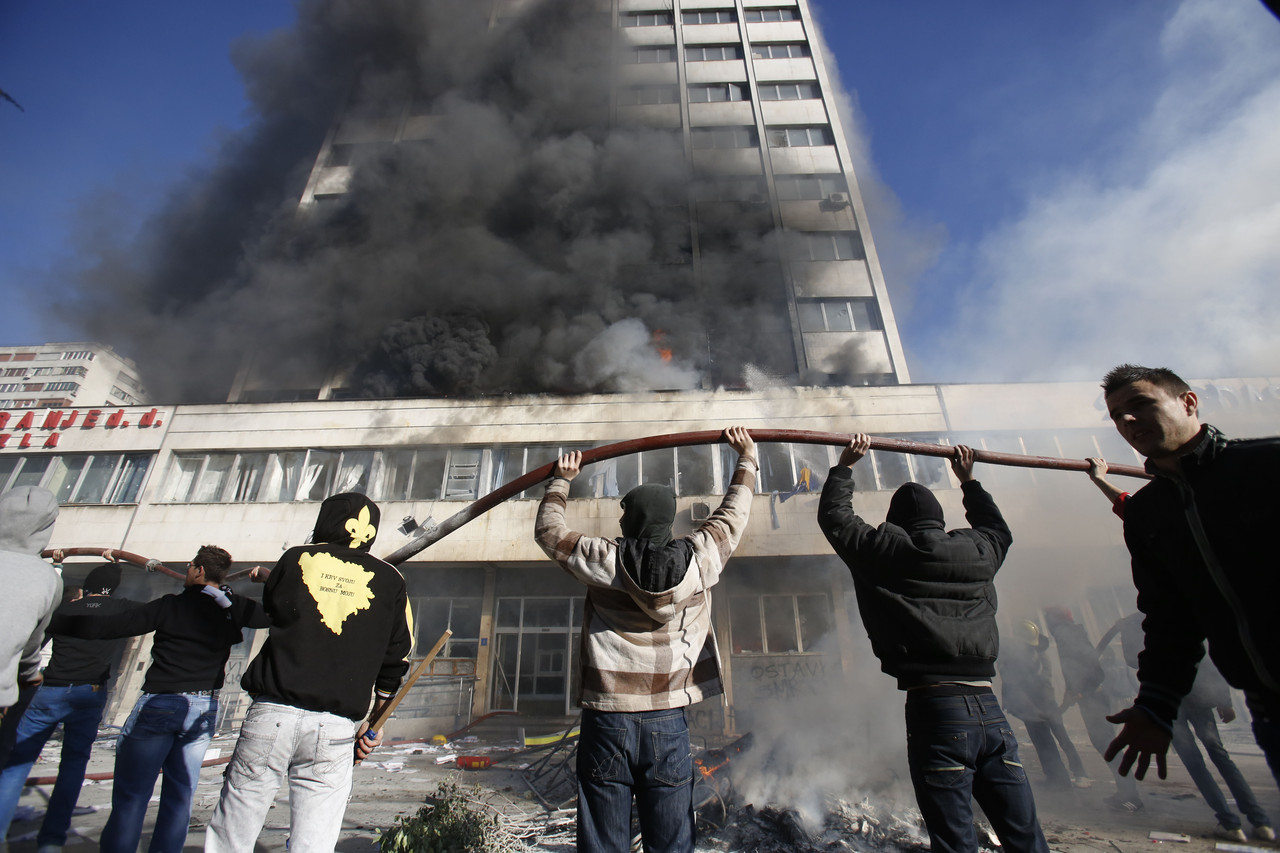 The current protests in Bosnia and Herzegovina will bring few results, especially not positive ones, and – as has already been seen – will be interpreted by various sides to suit their own needs and interests, whatever the final outcome.

George Orwell once wondered if a political joke serves the purpose of a tiny revolution or a safety valve for undemocratic and totalitarian regimes. In other words, is a political joke a truly revolutionary act that may inspire citizens and prompt them to attempt to remove an oppressive or unjust regime? Or, is it simply a safety valve that provides temporary, but illusionary, satisfaction to an oppressed citizen, and thus helps an oppressive regime survive longer than expected or desired? The same question can be pertinently raised about the current civilian unrest, with a far from moderate degree of mob violence, and protests in Bosnia-Herzegovina. Of course, expectations are high; especially among those who have decided, or were persuaded by some bounty, to take their social or political dissatisfaction to the streets. The current protests, however, will bring few results, especially not positive ones, and – as has already been seen – will be interpreted by various sides to suit their own needs and interests, whatever the final outcome.

Margaret Atwood, a famous Canadian fiction writer, stated once through one of her characters that war is what happens when language fails. The same can be said about the protests currently taking place in Bosnia. Those protests simply indicate that the major problems of today’s Bosnia-Herzegovina have for too long been suppressed. Such problems have also never been sufficiently or satisfactorily tackled through the medium of reasoned discourse including legal and judicial venues as a key to democratic polity. The cluster of Bosnia-Herzegovina’s problems is, of course, enormous, and often it is hardly possible to distinguish between social, political, legal, or constitutional ones. As a result, the goals of current protests in Bosnia-Herzegovina are couched in all kinds of vocabulary: some refer to the unity of Bosnia-Herzegovina, some to corruption, and some even to ‘the economic model that empowers the rich at the expense of the poor.’ Furthermore, despite the fact that many have tried to present the demonstrations as purely socio-economic in nature, the truth is that they are very much ethnically marked, and many have rightly pointed to both the political and ethnic aspects of the demonstrators’ agenda.

It is an undeniable fact, for instance, that demonstrations are taking place in predominantly Bosniak-Muslim parts of the state, more specifically in the parts of the Federation with a Bosniak-Muslim majority. Both Bosnian Croats and Bosnian Serbs tend to view the protests as a marker of ethnic identification, as a merely Bosniak-Muslim problem, and choose to stay away or distance themselves from them. The city of Mostar is a clear case in point – as soon as the demonstrations have threatened to cause a higher level of inter-ethnic animosity, local police was ordered to apply more radical measures against more violent of demonstrators. On the Serb side, the president of Republika Srpska, Milorad Dodik, has already used the demonstrations as proof that, if something is rotten in Bosnia-Herzegovina, it is within the Federation, a Bosniak-Croat entity, where obviously a large amount of frustration has built-up.

In terms of its policy-guidelines or agenda, the demonstrations are poorly-planned and amateurishly executed. Apart from asking for the dismissal or resignation of elected cantonal government’s officials, and for renewed ‘efforts’ at investigating privatization cases, the demonstrators obviously have no clear or universally valid political points to make, and more importantly, have no means at present to change anything. For instance, the demonstrators in some cases put up banners like ‘This is Bosnia’, or ‘For a functional and unified Bosnia’, which cannot carry substantive political weight. Such banners are not welcome among Croats and Serbs, and, having in mind the Dayton constitutional structure of the state, the banners carry no tangible political meaning. Also, it is clear that those protesters who applied more violent means (and in the process set several buildings alight, including the Bosnia-Herzegovina Presidency building and the recently refurbished city-council building in Mostar, and expectedly clashed with the police) actually had no political message or declared goals. They simply aimed at both real and symbolic destruction of property under their own interpretation of the political significance of the property. Perhaps they oppose the parties in power, and perhaps they oppose the current constitutional structure of the Federation? Nobody really knows the answer to such questions, and nobody can expect an answer from those involved in these violent and obviously criminal attacks.

Everyone who cared to follow recent developments in Bosnia-Herzegovina – starting at least with the 2011 anti-constitutional formation of the Federation government, under the so-called ‘Platform’ policy by a number of parties, which the High Representative, Valentin Inzko, supported and even brought to power – knows that Bosnia-Herzegovina is in a deep crisis. Everyone also knows that this crisis is not only a crisis of the state structures or institutions, but also one of morality, legality, education, public media efficiency, and a sign of both economic malaise and social alienation and atomization in general. It is impossible to start untying the main knots of the crisis without getting answers to some perplexing issues.

Since the international community in Bosnia-Herzegovina plays a highly important role, perhaps some of the questions should be addressed to them. For instance, why was the six-month provision of the Dayton peace agreement concerning the deal on the precise division of powers between the entity and the state-levels never agreed, let alone implemented? Why did the international community, at least at the European level, take so long to identify the dangers of centralizing, or anti-Dayton, ‘forces’ for which the Bosniak-Muslim political elite is primarily to blame? Or, more specifically, what has the anti-fraud unit of the Office of the High Representative achieved over the last fifteen years? Or, what role has the international ‘element’ (for instance, through unethical banking practices) played in enormous gathering of financial wealth by some political leaders and representatives? Or, is ‘Sejdic-Finci’ problem soluble at all under the existing constitutional arrangement?

Such questions cannot be answered by protests, or mob violence. And, more importantly, no public demonstration or protest can raise such questions effectively. At their best, the current developments in Bosnia, of which protests and mob-violence are just a part (because, there may be some developments also behind the screen of public visibility), can lead to the resignation of a number of MPs or governments. At their worst, they may contribute to the country’s further financial and economic demise, and to the spread of fear and insecurity amongst ordinary citizens. Perhaps they could motivate some of the politicians in power to start getting more serious about their own political responsibilities, and more moderate and prudent in their political rhetoric and agenda. However, if Bosnian politicians need such lessons or promptings, then this speaks unfavourably of both the politicians and the electorate who voted them to the power positions constitutionally-engineered, and often supervised, by international protectors.

Dražen Pehar has a PhD in politics and international relations from Keele University (SPIRE 2006), holds an assistant professorship (BiH) in the philosophy of law and in politics with sociology. Dražen is a DiploFoundation Associate, and previously served as Chief of Staff to the BiH Federation President (1996) and as a media analyst to the OHR (1999/2000). Dražen is currently teaching at the Faculty of International Relations and Diplomacy in Mostar.