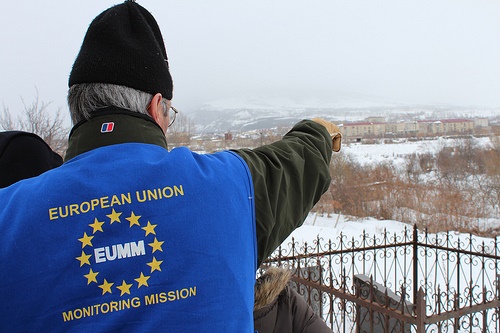 The installation of a 400-kilometre security fence along the Georgian-South Ossetian border has had a huge impact on the lives of local people.

After the South Ossetia war of 2008, a process started at the administrative borderline between Georgia and South Ossetia which, while being relatively simple, has had an immense impact on the population living in the border region. Russian and South Ossetian border guard troops started installing fences along the 400 kilometre administrative border line (ABL) between Georgia and South Ossetia. The borderization process involves the installation of fence and barbed wire along the ABL, frequently cutting across communities. While the borderization processes between Israel and the Palestine territories have gained widespread attention in both the journalistic and academic world, the process going on in the South Caucasus has gone relatively unnoticed.

After the South Ossetia war of 2008, the small de facto state of South Ossetia was recognised by its Northern neighbour Russia, as well as Nicaragua, Venezuela and a couple of Pacific island states. Since then, the Russian Federation has significantly intensified its support on a diplomatic and practical level. The International Crisis Group (ICG) stated in its 2010 report on South Ossetia that the Russian Federation is responsible for staffing “over half the government, donates 99 per cent of its budget and provides security”. While these aspects are maybe not visible for the local population, other forms of influence are significantly more visible on the ground such as the borderization process at the ABL.

Borders and boundaries are of significant importance as the border landscapes of states are the areas in which political processes receive their most concrete territorial and/or geographical expression. This is because borderlands are the geographical areas where political entities come into direct contact with each other. By enforcing divisions and borders, physical facts are created as ‘facts on the ground’. Therefore, the installation of fences is also a form of ordering, as it is a distinct indicator of where ‘something’ begins and where ‘something else’ ends. This bordering process therefore attempts to define the organisation and limits of a place, as well as the group who claim it. Put simply, by bordering a certain area, authorities are able to establish control over who belongs where and who does not.

Borderization is therefore an obvious step in the nation building process, and causes significantly more problems in cases with disputed or unrecognised entities. This is clearly the case in South Ossetia, where the South Ossetian government does not have the manpower and logistics to conduct such an operation – hence the involvement of Russian military personnel. This of course raises questions concerning the sovereignty and independence of South Ossetia and the question of whether the de facto state is actually able to survive on its own.

But instead of focussing on the geo-political triangle between Tshkinvali, Moscow and Tbilisi, let us have a closer look at the local implications of the borderization. The ICG has highlighted many of the difficulties and frustrations of the local population. People were detained for unknowingly crossing the ABL while attending their farmlands, gardens or visiting neighbours in the same villages in which they lived. A farmer bitterly complained: “If my cow runs across the boundary, I have to show my international passport to get it back” Another example ICG gives are Georgian woodcutters who crossed the ABL unintentionally while working in the woods. Actions that were legal before, and had been for decades, have suddenly become illegal, and punishable by imprisonment or fines.

The installation of fences also has an immense impact on the people living in the border region. The borderization process significantly affects the livelihood of the population living near the border, as it disrupts the everyday life of the local population and restricts their freedom of movement, with fences “cutting off local communities from their farm land, keeping children from attending school and blocking access to cemeteries.” The Georgian elderly also receive their pension in Georgian Lari, which they have to collect on the Georgian side of the ABL. Once they have collected their pension, they are confronted with the problem that Georgian Lari is not an accepted currency on the South Ossetian side of the ABL, as the Russian Ruble is the used currency in South Ossetia.

The European Union Monitoring Mission (EUMM) is the international organisation that is currently responsible for checking up on the situation in the borderlands on the Georgian side of the administrative border line. Since 1 October 2008, the EUMM has been “been patrolling day and night, particularly in the areas adjacent to the South Ossetian and Abkhazian Administrative Boundary Lines.” Examples of activities conducted by the EUMM, besides patrolling of the ABL, are the installation of an emergency hotline and organising meetings in order to address and update people on the local situation.

While the EUMM has acted as a facilitator in preventing violence and grievances by organising meetings and patrolling the Georgian side of the administrative border line, the question of whether the mission has significant influence needs to be asked. The EUMM still has not received any access into Abkhazia and South Ossetia which significantly undermines its efforts and efficiency. The Russian Federation has been very consistent regarding its policies towards the two regions of South Ossetia and Abkhazia. Since 2008, the international involvement in these two regions has diminished with the withdrawal of the UN observer mission (UNOMIG) in Abkhazia in 2008 after a Russian veto concerning the extension of the mission and therefore ending the presence of the United Nations in the region.

The installations of fences are therefore not only physical facts that are being installed, but also present us with a symbolic notion of the current situation. The bordering up of South Ossetia is also an effort to break with the assumption that South Ossetia might be brought back under the wings of Tbilisi. It has been no secret that, in contrast to Abkhazia where Abkhazian independence is the foremost driving force, South Ossetia wants to be “‘re-united’ with its northern counterpart of North Ossetia which is situated in the Russian Federation. The fact that most South Ossetians also hold Russian passports is not encouraging for Georgia.

The above problems are only a fraction of the dilemmas and disputes that are taking place in the borderlands between Georgia and South Ossetia. The borderization process, a striking example of the impact of geopolitics on a local situation, is not helping the reconciliation process after the short but far reaching conflict of August 2008.

Mikel Venhovens has a Master’s degree in Conflict Studies & Human Rights from Utrecht University. He is a specialist in conflict in Eastern Europe and the former Soviet union, and has conducted research in Latvia, Georgia and Abkhazia.