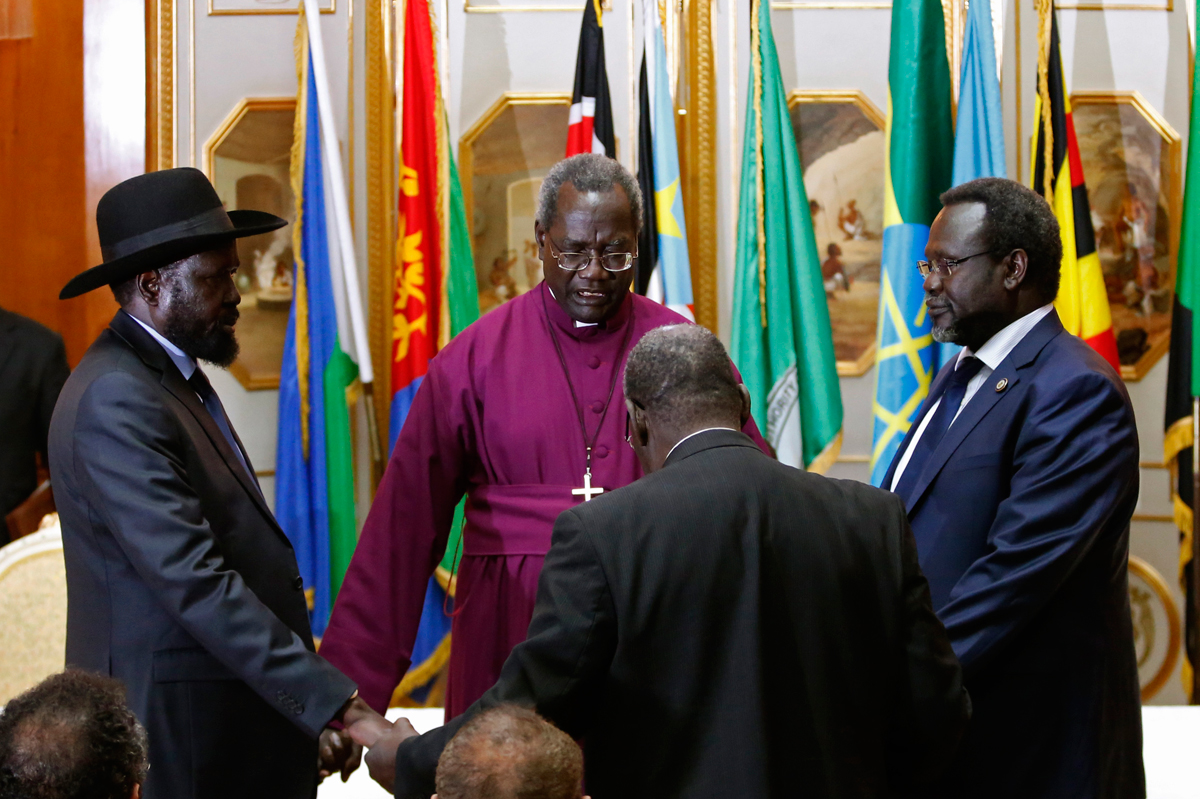 Addressing the legitimate needs of the people – focusing on bottom-up state building and reconstruction processes – will be key for building sustainable peace in South Sudan.

As expected, South Sudan’s rival factions – represented by President Salva Kiir and Dr. Riek Machar – have signed yet another ceasefire agreement under the tutelage of the Intergovernmental Authority on Development (IGAD) and the international community [1]. The ceasefire, officiated in Addis Ababa, aims at enhancing political stability. There has been a proliferation of narratives that attempt to account for conflict in South Sudan. The rational, however, depends on which side one is allied to. The intractable conflict resonates from political disagreement that escalated to ethnic confrontation focusing on the Nuer and Dinka communities [2]. The IGAD responded promptly through the diplomatic track in Addis Ababa, leading to teh signing of a first ceasefire agreement that was notoriously ignored. This paved the way for excessive aggression, with over 10,000 people killed, 1.2m displaced and more than 300,000 fleeing to the neighboring Sudan, Kenya, Uganda and Ethiopia. Most recently, comparative reports released by OCHA and FEWSNET [3] have confirmed that over 6.7m people are in need of humanitarian aid, with Jonglei, Unity and Upper Nile States most affected.

Peace pacts and cease-fire agreements have halted major conflicts in the past. However, a lack of commitment to agreements by conflicting actors has rendered this approach largely redundant. Despite IGAD’s efforts to halt violence through a peace agreement, the signatures on the mediated documents may not lead to sustainable peace in South Sudan. Whilst they may moderate the rivalry for power and political legitimacy between the Kiir and Machar, addressing the legitimate needs of the people – focused on bottom-up state building and reconstruction processes – will be key for sustainable peace in South Sudan.

Conflict in South Sudan was a means to exercise power, leading those at the grassroots as collateral damage. There are various possible scenarios and asymmetrical outcomes that must be considered for peace. First, if Machar took the presidency? Second, if Kiir retained the presidency with a power sharing deal with Machar? Third, if Kiir retained the leadership exclusive of Machar? Fourth, the operationalization of a transitional government ? If Kiir and Machar took early retirement and another group of leaders prevailed, then there would be sustainable peace; but this would only be a negative peace, one that serves the interest of the state.

The international community, practitioners and scholars should evaluate the short- and long-term impact of “the 3 year proposed government of national unity action plan”. Kenya is a classic example.  In the broader picture, South Sudan needs to concentrate on all-inclusive nation and state building. The state of South Sudan will outlive President Salva Kiir and Dr. Riek Machar, hence the country needs to invest in conflict transformation. Reframing what is normal for the future generation – from violence and subjugation to equality and nationhood – will plant the seeds of peace. As Jok Madut Jok put it more acquiescently, you cannot separate the nation from the state vis-a-vis.

It is imperative to understand the correlative discourse of rebel movements and politics in Africa. More often, the philosophy of a rebellion movement is based on liberation and redemption; however, the outcome does not necessarily reflect the means. Lessons learnt in the aftermath of conflicts from the Great Lakes regions – such as Uganda and Kenya – suggest that peace agreements serves the needs (political and economic) of the protagonist and ignore the intractable causes easily provoked for negative communal mobilization. Such agreements are often based on the premise that the political opinion of leaders are a reflection of actual community needs. However, when political scores are settled, the actual and legitimate needs of the community remain unresolved and postponed for a campaign agenda during electoral periods; namely a social capital for future political needs.

To realize sustainable peace, South Sudan need to focus on two major tracks for change. First, we need to move beyond a focus on Kirr and Machar to pursue bottom-up conflict transformation approaches, with the goal of restoring a tattered social fabric. Transformed people-to-people relationship leads to cooperation that fosters state stability, thereby sustaining and reforming perceptions and attitudes. The main goal is to reconcile human relationships and transcend militaristic affiliations. This is not a onetime outcome achievable through a mere handshake and a signature.  What has presently been achieved only serves the political cleavages, but does not reflect upon the question, “why do people join rebel factions?”[4].

Second, there is need for the state to establish equitable economic growth. Among the major causes of the current conflict is skewed development and representation, further exacerbated by political influence. In this case, equality can be achieved through a national development plan. More generally, African countries need to transcend the “liberators syndrome” that has strangled the democratic space necessary for inclusive development. The syndrome has relied on the proposition that the liberator is the legitimate vision carrier that would liberate the country, while others with different opinions and perspectives that do not necessarily match with the mainstream ideology are labelled “enemies of the state.” The paradox is that many African countries still term themselves as “republic, sovereign and democratic states,” but this is nothing less than imagery.

Equality should also account for the minority communities other than the majority Nuer and Dinka. South Sudan is home to over 8.3m people, with over 60 ethnic groups, according to World Bank. More often, while the political agenda of the Nuer and Dinka are resolved, the other minority groups will most likely rebel, leading to a vicious cycle of conflict. On the other hand, South Sudan needs a sustainable economic system. The government needs to think of alternative livelihoods, synchronized with the context, with strategic support to help youth achieve sustainable economic engagement. Disregarding this fundamental pillar of society will lead to a neo-colonialism of the youth towards global opportunities.

While the popularized term “rebel” is a creation of language and politics, after the conflict the so-called “rebel” retraces their normal life as a member of the community. In the broader picture, this means that the victims and the perpetrators alike will share the communal space. For sustainable peace at the national-political level, therefore, attention and energy needs to be focused on bottom-up peace building processes, focusing on the issues – the extensive past, turbulent present and murky future – that drive conflict dynamics [5]; going beyond the signatures and fancy negotiations that only clean and dress the wound, but do barely anything to heal it.

Michael Ndegwa is a researcher, analyst, and reader in Politics, Peace, and Security in Africa. Currently he has just completed his internship with Life & Peace Institute Nairobi where he has been focusing on conflict transformation projects in Kenya and Somalia. He is currently finalizing his M.A in Peace and Conflict Studies of Egerton University. His thesis focuses on Women and Peace Building in Kenya”.

2) Other have attributed the genesis of the conflict to suppressed leadership wrangles in within SPLM that was provoked and exacerbated when Kiir sacked Dr. Machar his vice president among other top officials in July 2013. The move transcended to ethnic cocoons thus leading to protest and liberate. With increase grouping and regrouping, the governments was snappy to attribute this to an attempted coup.

4) According to John Burton, people will always contest for the most basic but fundamental needs and central to them include Security, Identity, control, and respect. While these needs are deprived, the affected will with outmost certainty will always mobilize in defence. Primarily, majority of rebel movement tend to subscribe to this school of thought.  http://books.google.com/books?id=cryZPwAACAAJ

5) Guy, M Burgess & Heidi, Burgess, (2003), what are intractable conflicts? http://www.beyondintractability.org/essay/meaning-intractability  accessed on 28 May 2014.