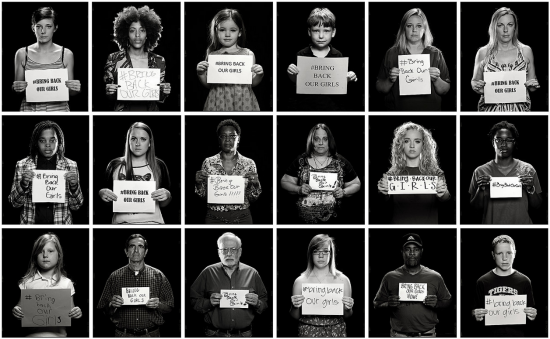 What war journalism does is create a hype that gets everyone to say “Never Again” and employ powerful sounding hashtags – but it stops with that. Once the conflict is resolved or becomes old news, there is a massive decline regarding concern over the issue, yet nothing was done to understand the root of the problem in the first place.

When beginning writing this article, I ran a simple search on Google’s news panel with the words “Boko Haram.” In all the results that ensued, I found three common elements: propaganda, us-versus-them, and a conspicuous absence of peace efforts – three factors that feed into the very quintessence of war journalism.

War journalism is exactly what keeps war alive. It is the frontrunner element that campaigns for the prolonged business of war. For the uninitiated, as the name suggests, War Journalism refers to journalism that is focused on war, and encourages a presentation that [1]:

In sum, what war journalism does is create a hype that gets everyone to say “Never Again” and employ powerful sounding hashtags – but it stops with that. Once the conflict is resolved or becomes old news, there is a massive decline regarding concern over the issue, yet nothing was done to understand the root of the problem in the first place. This leaves a sort of Band-Aid on the sore, without any concern for preventing the conflict from happening again.

On the contrary, Peace Journalism doesn’t concern itself with the winner-versus-loser rhetoric, but rather zooms right into the root of the issue. It portrays conflicts in realistic terms and encourages the exploration of backgrounds and contexts of conflict formation. It presents the causes and options of every side involved, without introducing the ‘us’ versus ‘them’ perspective. It effectively serves the purpose by [2]:

Peace Journalism is about transparent journalism that relies on facts and explores the reality of the situation. In any of the reports I’ve read so far, I haven’t found a background on the Boko Haram or any description of its activities, its rationale or its motivations. In the process, I am – and I am joined by a majority of the world’s laypeople in this – only a jingoistic crusader, happily brandishing the #BringBackOurGirls tag without understanding the simmering elements to the conflict. I want a solution, but I have no idea what the solution can be. I don’t know anything beyond the fact that these girls were kidnapped from a school and that the Boko Haram is a group of terrorists that are pivoted against Western Education. There are undoubtedly scores of efforts being made globally to tackle the issue – but the mainstream media doesn’t tell me about any.

Had the narrative advanced itself from a Peace Journalism perspective, we would have been able to divert our attention to realistic and valuable solutions. We would be able to work strategies that are capable of addressing the undercurrents that motivate the Boko Haram in their activities.  Proving my point is this article from The Guardian, which focuses on the coming together of Nigeria’s two main religious groups in an attempt to respond to militancy and terror. It is immaterial what their religious faiths are, as it appears, for they seem to recognise that it is the people that suffered – irrespective of their faith.

This is precisely the problem with the way the world tackles conflict. Peacebuilding is a process that starts from knowledge. First and foremost, we need an understanding of what has happened and why. Next, we need to identify the kinds of solutions that are practicable given a particular framework concerning the groups involved. The third rung in the ladder is to understand the social ethos in which the actors are operating so that the best suited solution can be identified. An external solution often times remains a mere imposition that doesn’t succeed simply because the local community neither owns it, nor identifies with it. There is no use for Band-Aids as in War Journalism – what is necessary, is a look at the very root of the conflict in order to address it comprehensively.