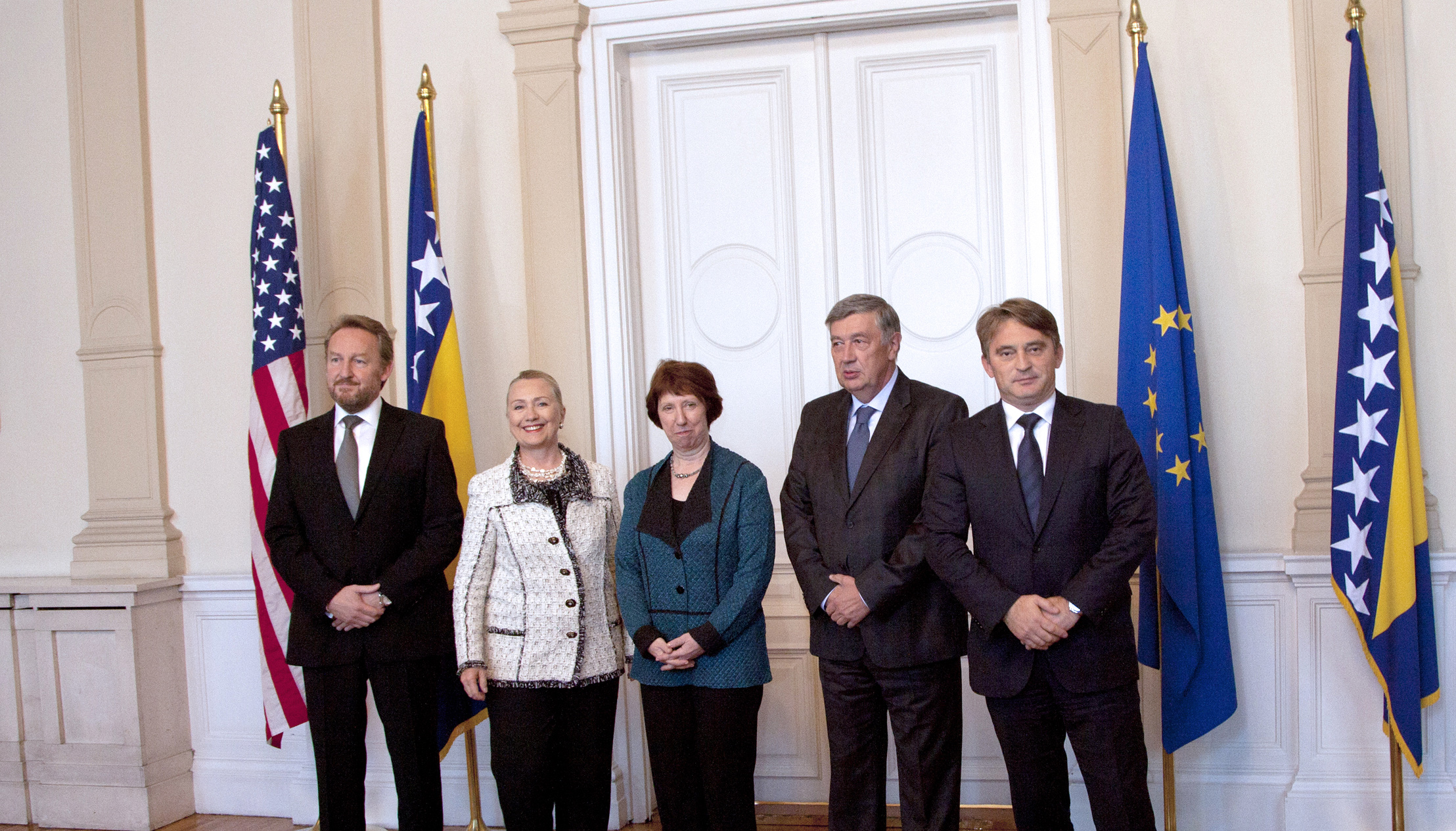 Whilst the strong link between ethnicity, territory and governance has caused problems that contribute to the Bosnian crisis, the constitutional reform cannot hope to overcome this, but can only reduce its impact at best. Constitutional reform entails a trade-off between seeking to achieve modest improvements of the institutional structure, whilst sustaining public debate on topics that sideline the issues of main concern for Bosnia and Herzegovina’s citizens, such as poverty, corruption and the economy.

At a meeting at the German Foreign Ministry in Berlin on the future of Bosnia with senior international officials and experts, I have had a chance to discuss the benefits and disadvantages of constitutional reform, a perennial topic for Bosnia. Here are some of the considerations I had the chance to present and discuss as to why I remain skeptical of the need to prioritize constitutional reform.

The constitutional structure is often identified as the main problem of Bosnia and Herzegovina, including two recent proposals by a coalition of Bosnian NGOs K143 (drafted by the Democratization Policy Council) and the International Crisis Group. The Dayton constitution is indeed not much loved and would find few supporters in its entirety. Over the past 15 years or so, countless drafts and ideas have been floated and no self-respecting international think-tank, political party and other observer would not have launched their own ideas. From abolishing the Federation (ESI), to abolishing the entities and replacing them with new multinational regions (SDP and SBiH), to creating a Croat entity (ICG) or just having strong municipalities (K143), there is hardly an option that has not been proposed. Indeed, considering the flaws of the constitution, it is easy to come up with better options. However, most proposals are unclear on one crucial question, how can such a change be brought about? A second question most proposals assume or leave unconsidered is whether such changes would unlock the country and bring about fundamental change.

Another form of the comprehensive approach would be to expand the matters to include issues that were not part of Dayton, but are rather related to current needs of Bosnia, such as EU integration or reducing patronage and corruption in the Bosnian system. Thus, the package would be more transformative than constitutional reforms can be.

Taking a step back from these options, we need to consider the reasons for opting for a comprehensive approach. The first motivation is to unlock a number of blockages in Bosnian system and thus transform the political dynamic in Bosnia beyond the constitution. The second approach would be to increase the pie to facilitate settlement. Here, the comprehensive approach provides for additional incentives for parties to accept constitutional reform that otherwise might not be palatable for them. Here, the relevant comparison is the April Agreement between Kosovo and Serbia that provided external incentives in the form of EU accession to both parties. The two motivations for a comprehensive approach are not easily compatible as the former seeks to address the problems of Bosnia comprehensively which inherently would include clipping the power of ethnonationalist political parties and their patronage networks, while the latter approach would be about securing a buy-in from all parties.

The format of such a comprehensive approach would require extensive international mediation, probably over several rounds of negotiations, even if short-term negotiated settlements might be more appealing, they risk failure considering the complexity of the subject matters and the varying incentives of political actors involved. Such comprehensive approach has not yet been tried in Bosnia and would require consensus among key international actors (in particular EU member states, the USA and preferably the two signatories of Dayton, Serbia and Croatia). A package solution also runs the risk of holding up reforms as they are all folded into the comprehensive package. Furthermore, external incentives for political actors are hard to come by, since currently rewards in terms of faster progress towards the EU appear to have little appeal.

If a comprehensive approach, or rather either of the two presented variants, appear unlikely, the option remains whether or not a constitutional reform by itself should be pursued and if so, whether through a gradual process or a “big bang” approach. The gradual process would see passing of several constitutional reforms over time, either negotiated by party leaders (with all normative problems this entails) or in parliament (with all practical problems) and build on each other. The big bang approach would seek a larger reform package to be passed in one go. The former has the advantage of building a gradual momentum, as well as normalizing the idea of constitutional change rather than reducing it to a one-off event. However, such process might take very long and failure at each step can derail the entire process. The big bang has the advantage of settling the most pressing issue at once and also allowing for some degree of horse trading that would provide different parties with incentives to compromise. The main problem is that both approaches have been failing for ten years. Gradual change has not happened and the constitution has only been changed once since Dayton to include the reference to the district of Brčko. The big bang approach also failed in April Package in 2006 and the Butmir Process in 2009 and also the Prud Agreement 2008 never reached fruition. Of course, the April package of constitutional reforms failed narrowly and was a near success. However, since Bosnian politics has become more intractable, the likelihood of a repetition of the constitutional reforms negotiated in 2006 appears slim.

The challenge arising from this observation is the tension between ambitions of those who have made plans for constitutional changes in Bosnia and the ability to translate them into reality. Any realistic process of constitutional reform will have to take place through the existing Bosnian institutions. Even an international conference on Bosnia will not have the legitimacy or the ability to enforce a large-scale institutional change without consent of Bosnia’s elected officials. There is no other realistic scenario of institutional change in Bosnia—even mass protests would at best create pressure on the institutions to act rather than overthrow them altogether, especially not country-wide. Thus, it is imperative to reckon with the political interest of the office holders in the country. In addition, despite evidence of significant disillusionment with the dominant political parties and the system, there is little to show that Bosnian citizens have a shared political project and consider themselves to be part of one community. Of course, if voters would bring into power parties with radically different politics, this would change, but so far there is little evidence for that.

Keeping these constraints in mind, there is no reason to believe that a comprehensive and far-reaching reform of the Bosnian constitution that would abolish the entities would be possible, as a recent proposal by K143 a coalition of Bosnian NGOs proposed, or otherwise transform the governing structure. Why would any political party from the RS agree to give up the entity veto when it provides it with an easy mechanism to block any decision at the state level? Similar questions can be raised about all major stumbling blocks of constitutional change. The only manner in which some elements of corporatist ethno-territorial control could be loosened would be through deals that offer other incentives or safeguards. Thus, increasing the number of members of the House of People would, for example, increase the number of MPs needed to evoke an entity veto, creating potentially higher hurdles. At best, such changes will undo some of the most egregious examples of ethnonationalist blockages or quotes, but not fundamentally transform Bosnia into a different political system. Thus, the link between territory and group identity is likely to remain strong, veto rights will exist, as will quotas. Removing open discrimination and somewhat streamlining decision-making could be achieved. This, however, neglects one key factor: is the main problem of Bosnia’s current crisis institutional or constitutional and can re-negotiated institutions alleviate these? The answer to the first part of the question is a partial yes, to the latter a no. Institutions are overly complex and blocked. However, it is telling that the protests in February focused on the local and cantonal level. In particular in Tuzla, neither does power-sharing matter nor is it one of the more dysfunctional cantons. Thus, grievances with political elites cannot be obviously fixed through constitutional amendments.

In effect the discussion about Sejdić-Finci in the aftermath of the protests in February seemed like the discussion among medieval angelology about how many angels can dance on the pin of a needle, esoteric and mostly irrelevant. Of course, discrimination is not desirable and deserves to be removed, yet the position of Roma is not going to change if one of them would have a theoretical chance of joining the state presidency as a Rom, since Roma can be elected as presidents in all neighboring countries without this having any practical effect.

Surely, the strong link between ethnicity, territory and governance has caused problems that contribute to the Bosnian crisis, but constitutional reform cannot hope to overcome this. It can at best only reduce its impact. At the same time, constitutional reform discussion have been reinforcing the power of established elites, as discussions on such reforms focus on protecting national interests, entity rights, threats to identity and other topics that are the life-blood of ethnonationalist rhetoric. Constitutional reform thus entails a trade-off between seeking to achieve modest improvements to the institutional structure while at the same time sustaining public debate on topics that sideline the main issues of concern for BiH citizens, such as poverty, corruption and the economy.

A procedural approach to constitutional reform would shift the focus on benefits of a having a process that seeks to build consensus and thus re-establishes Bosnia as a consensus-based polity, no matter the substance of the reforms themselves. Of course, taking a too liberal view of such a procedure of substance approach would accept even problematic „deals“, such as the „reforms“ agreed between Milorad Dodik and Zlatko Lagumdžija in 2012.

What constitutional reform (at the state and entity level) in the short and medium term at best can deliver is technical fixes to some matters that blocked decision making in Bosnia (i.e. by increasing the number of MPs in both chapters in order to increase the number of MPs needed to block laws through the entity clause or the formation of the House of Peoples in the Federation). This can alleviate some of the blockages that Bosnia encounters, but is more likely a recipe for further procrastination than a panacea.

Florian Bieber is a political scientist working on inter-ethnic relations, ethnic conflict and nationalism, focusing on Southeastern Europe. He is a Professor in South East European Studies and director of the Center for South East European Studies at the University of Graz. Florian is also a Visiting Professor at the Nationalism Studies Program at Central European University. He is the editor-in-chief of Nationalities Papers and the associate editor of Southeastern Europe , and is on the editorial board of Global Society, Ethnopolitics, Südosteuropa.