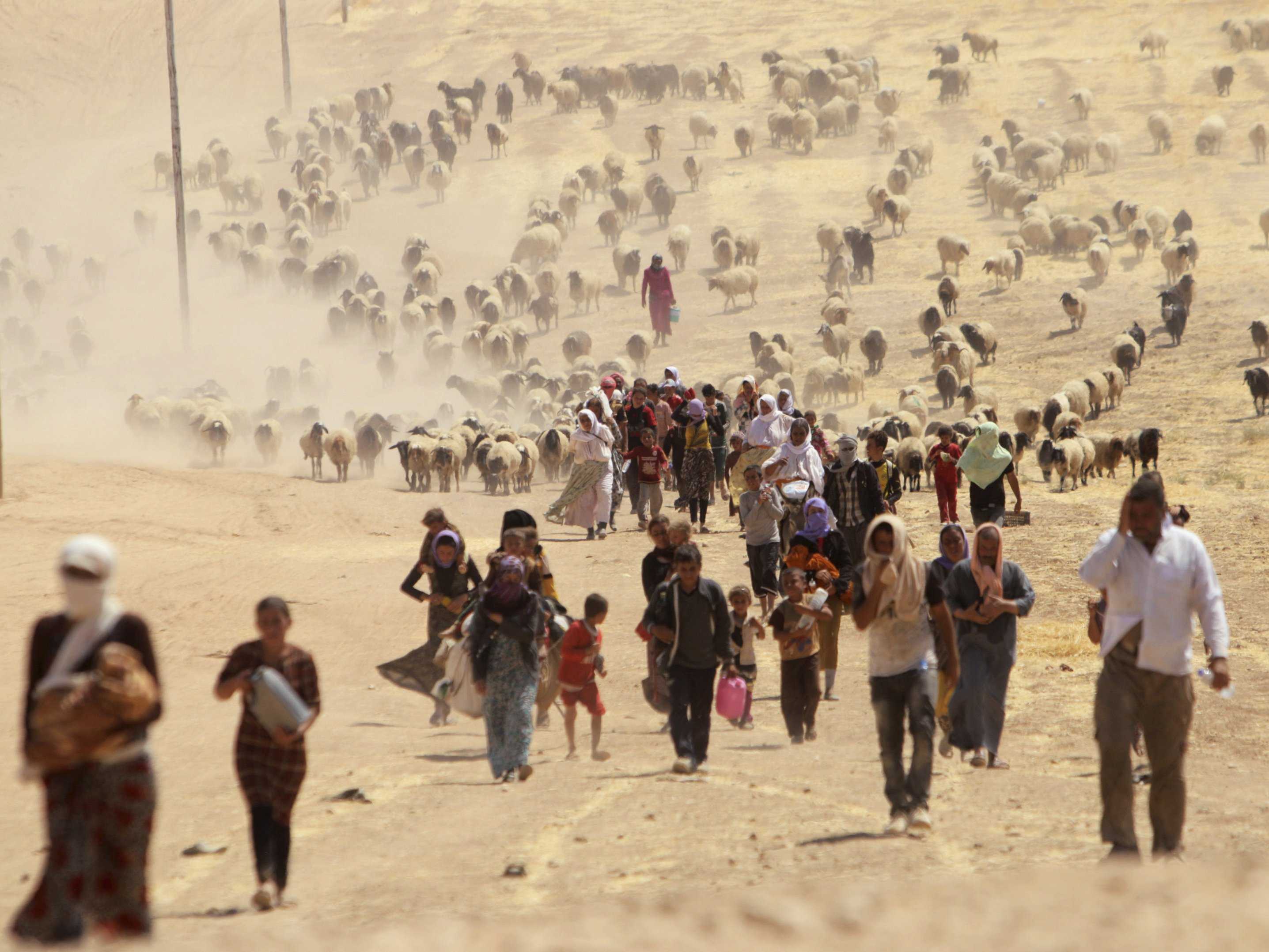 While approaches to “genocide” differ and the claimants voices are many, the historic legacy of genocide must be a starting point. One could conclude that both Palestinians and Yazidis are experiencing such a destructive process, albeit over different time scales and receiving opposing ideas of “support” and condemnation from Western powers. It must be clear, however, that any condemnation of genocide against one party must acknowledge the destruction of the other (in these cases).

How this word is used is no doubt a controversial matter, but it is important that discussion and debate around this term embraces Raphael Lemkin’s intellectual legacy and reflects the myriad of ways that such a classification and process of social group destruction reflect history and the present. At any point since the rise of international human rights regimes there have been multiple atrocities demanding the attention of the UN and the rest of us. At this moment many groups are under the threat of destructive processes: Rohingya in Burma, Christians and Muslims in CAR, Sunni in Syria, Palestinians in Palestine, various groups in the Sudan (Darfur, Nuba, South Sudan) and Kenya, Uzbeks in Kyrgyzstan, and various groups in Iraq, including Yazidis.[1] Then, add to this brief summary the many yet-to-be-transformed conflicts resulting from past genocides, colonial or not, throughout the globe (think indigenous rights and reconciliation in Australia, Canada, and the US, Latin America and various parts of the African Great Lakes region). Genocide, past and present, is a complex and contentious phenomenon requiring an equally robust and evolving framework of analysis.

These numerous and massive human crises notwithstanding, politically divided calls for action on genocide have most recently being aimed at Yazidis in Iraq and Palestinians in Gaza. Both cases represent some divergences in diagnosis/identification, destructive processes and international action (which may also mean intervention). These elements of this phenomenon will serve as a guide for a brief comparison.

The claim of genocide in the Middle East has been made by both Israelis and Palestinians in the past. Everyone ranging from Holocaust survivors, western audiences, and political actors on the ground have joined in the chorus on either side. However, neither claim has yielded little international recognition or support. The identification of genocide in the case of the Yazidis has followed a similar track as it did in Kosovo: a publicly broadcasted massacre aftermath and low-scale atrocities prompting Western elite diagnoses of genocide. Further a recent history of continued attacks and forced removal of Christians in Iraq and Syria offers a backdrop of escalating destruction. The identification of genocide seems constantly overwhelmed by political ideologies and pornographically numbing CNN-effect reporting, rendering the deployment of UN members obligations to prevent and punish increasingly less-effective.

This is probably the richer area of comparison and analysis, highlighting the experiential dynamics of “genocide”. In Iraq, an area of great instability and past dictatorship, minorities have been constantly at risk, with many Christians having already fled in the course of the US invasion period of the war. The Yazidis have now come under more serious threat being forcibly removed from their homes and clearly being placed under threat of loss of life and even perhaps social group destruction. Compare this somewhat simmering affair with the higher magnitude attacks against Palestinians: a consistent program of forced removal, concentration and destruction of social cohesion, occasional, but short bursts of physical destruction under the auspices of anti-terror and counter-insurgency operations. The economic and structural level of Palestinian destruction is possibly most damaging to group integrity: from the recent prolonged blockade to historic bulldozing of settlements and seizure of land, and continued destruction of infrastructure in Gaza that is getting increasingly hard to recover from (not to mention the social and economic impact of the “wall”). The political and material ability of Israel to continue such violence remains in far less doubt than the fledgling Islamic State (IS). Both cases do vindicate Adam Jones’ thesis of “gendercide”: men of battle age are more often than not subject to the first and most demographically damaging killings.[2] However, the fact still stands that despite how long a group can withstand consistent and overwhelming force (think North American plains Indians) the destruction suffered over an increasing number years/decades is certain to do more lasting damage to the group. Size could also factor into this comparison: while Yazidis, in the region, number in the hundreds of thousands with a few thousand isolated in the Mount Sinjar area,[3] with 80 reported to have been massacred near the Mosul dam;[4] 4 million Palestinians live in the occupied territories, and less than half of this figure in the Gaza Strip. Of this, nearly 2,000 Palestinians have died in Israeli air strikes and violence in the recent fighting.[5] Hundreds of thousands of Palestinians remain internally displaced and as refugees, not just from this summer’s fighting but from successive and prior attacks.

Despite the calls for genocide and crimes against humanity to be recognised in both cases, it seems that the Western led doctrine of humanitarian intervention, and the often violence-justifying notion of Responsibility to Protect have only led to the continued practise of risk-transference security through bombing.[6] The US’ drone network in the region only helps to cement this practice, as seen in the case of bombing IS targets from the sky to protect civilians on the ground. Very few actors with political power have acknowledged the historic trend of foreign/Western complicity in supplying arms and therefore sponsoring state or quasi-state terrorism is also apparent in both cases. This adds a layer of moral complexity, responsibility and messiness, which often leads to an invoking of ownership of past “mess” which often only compounds regional conflict (Western funding and supplying arms to Syrian rebels that are now in use by IS). Currently, it is the response of the US to support Israeli bombing of Palestine by tacit consent and not calling for an arms embargo, and to directly bomb the IS to defend Yazidis. This bizarrely inconsistent approach only highlights the problematic nature of basing humanitarian foreign policy on national security interests.

Finally, one should not totally disregard intent, even though this highly legalistic and hard-to-prove aspect of genocide it is not entirely necessary when genocide is conceived of as an ideal type and aimed a social group destruction.[7] However, intent on the part of the Israeli government and other groups to destroy the Palestinians has been served with some prize anecdotal evidence over the years (consider the recent euphemistic and more direct language from leading Israeli politicians, and the use of social media by IDF troops betraying clear resentment and racism toward Palestinians).[8] Intent on the part of the IS is likewise apparent in seeking to establish a Sunni-only caliphate, only offering protection/rights to “people of the book”, of whom the Yazidis are not. Generally speaking, such “others” either convert or are responded to with extreme violence.

While approaches to “genocide” differ and the claimants voices are many, I will reiterate my first point: the historic legacy of genocide, viewed from Lemkins primary analysis of social group destruction, must be a starting point. One could conclude that both Palestinians and Yazidis are experiencing such a destructive process, albeit over different time scales and receiving opposing ideas of “support” and condemnation from Western powers. It must be clear that any condemnation of genocide against one party must acknowledge the destruction of the other (in these cases). Conversely, the question then begs to be asked: should Israel’s right to defend itself equate with IS’ right to establish its own state under it own terms?

Chris Davey will be a PhD candidate in Peace Studies at the University of Bradford this September. He previously received a Masters at Kingston University in Human Rights and Genocide Studies, and has taught in the Peace and Justice Studies Program at Utah Valley University. He currently researches mass violence and identity in the Great Lakes region.

1) More information about the these situations and others can be found at The Sentinel Project, and International Crisis Group.

3) This number has decreased since US air-raids and meagre supply drops to 4-5,000.

6) See another recent TransConflict article on this problem.

7) Martin Shaw, What is Genocide? (Polity Press, 2005), 13. Chapter 6 also deals with the limits of intentionality and the conceptual promise of the structural approach.