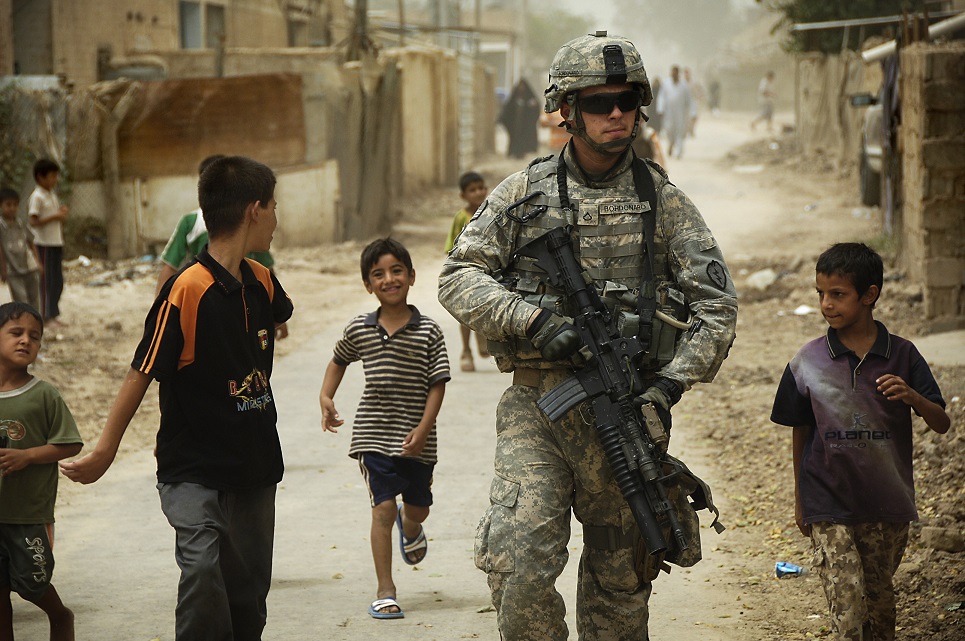 In the absence of a viable solution the crimes committed by ISIS, it is arguable that intervention is the only available route. However, the first step to securing sustainable peace is to iron out creases in the extant legal system and install peaceful alternatives to conflict.

The United States has used a series of fighter and bomber planes to launch attacks against the Islamic State of Iraq and Syria (ISIS). One set of strikes, near Kobani in Syria, have been aimed at suppressing or destroying nine fighting positions and an ISIS building. The other, in Iraq, destroyed an ISIS vehicle situated to south-west of the Mosul Dam, besides hitting four vehicles and four buildings used by the militants. While on the one hand these air strikes have reportedly helped keep some of the beheadings at bay, they haven’t quite prevented the movement of ISIS. ISIS, for its part, remains undeterred, even carrying out a mass killing campaign to wipe out resistance. By and large, the other target of the US attacks is the Korasan – the senior al-Qaeda membership that operates in Syria.

The US appears to have had a strategy in mind to keep ISIS in check through military attacks. In light of ISIS’s rampage, however, US plans appear to be failing. More and more reports are coming to light that the rebel coalitions in Syria which were originally working with the US are now turning against them.

In addition to the extant legalese, there are two norms that have evolved in practice, (but remain unsupported in legislative form) – namely, humanitarian intervention and the responsibility to protect. “Humanitarian intervention” is generally intervention in the territorial confines of another state on the pretext of seeking to prevent or put an end to gross human rights violations.[1] The essence of sovereignty and the values attached to it is responsibility, and a state is obligated to take care of its people. When a state fails or refuses to do this, per the norm of Responsibility to Protect, the state’s responsibility can be said to “devolve” to the international community.[2]

The argument that the concepts of Humanitarian Intervention and Responsibility to Protect collectively suffuse into the use of force rhetoric is that a country can intervene in another country – when the latter is either unable or unwilling to take action, the former can intervene. However, there is no legal basis for such intervention, and there is no acceptance in the international community to such effect.  Legally speaking, these US-led attacks are a flagrant violation of the prohibition on the use of force in public international law.

To begin, the attacks are directed at ISIS and the Khorasan for their attacks on Iraq and Syria. The fact that Syria and Iraq have neither consented to, nor approached the United States seeking help for an attack in response to the use of force by ISIS and the Khorasan still remains a fact. The US intervention in Iraq this year began with its intention to protect its own facilities in Iraq – which then grew in size to push back ISIS forces. The intervention in Syria branched out from the attack on Iraq, with the chief aim being to push ISIS back. Neither country consented to the intervention, nor approached the US or any of its allies for an intervention.

Second, ISIS and the Khorasan, both of which are targets of the attack, are not states. The right to self-defense can only be exercised against a state. Both entities in this instance are militant outfits. Exercising a right to self-defense against a non-state actor is permitted only in limited situations, as the International Court of Justice decreed in Nicaragua v. the United States in 1986 and in the Advisory Opinion in the case of the Palestinian Wall in 2004. It is only when the acts of a non-state actor can be attributed to the state where the intervention takes place.

Third, assuming that the former two conditions are non-issues – there is no basis for the contention that Iraq and Syria are unwilling, or unable to, respond to the use of force against them by the militant outfits. Given that the concepts of humanitarian intervention and the responsibility to protect are not technically accepted under international law in no uncertain terms, there is very frugal basis for justifying US attacks in this weak contention.

It is certainly deplorable to note that there is, for all practical purposes, a campaign of genocide against the Yazidi community. It is a horrific crime and must not be allowed whatsoever. In the absence of a viable solution to address such crimes, it is arguable that intervention is the only available route. However, intervention itself raises many questions – legally, practically and logistically. There is more to be gained by using a peaceful method of resolution rather than violence. This raises some very significant questions: how does peace as a tool of negotiation operate in the face of an impending genocide? How does the international community engage with a violent outfit that may refuse to come to the negotiating table ? What options can there viably be in the face of such violence and persecution? The international community should be focusing on this in order to make peace a priority. Peace is a developmental goal, not just an empty word. The first step to sustainable peace is to iron out creases in the extant legal system and install peaceful solutions and alternatives to conflict.

[1] Carlo Focarelli, “The Responsibility to Protect Doctrine and Humanitarian Intervention: Too Many Ambiguities for a Working Doctrine” J Conflict Security Law (2008) 13 (2): 191-213